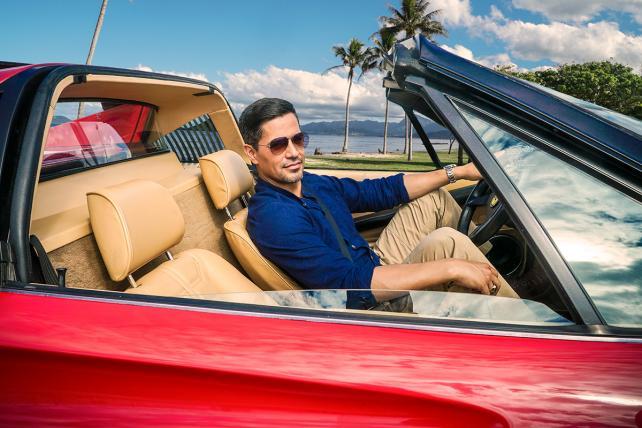 The new 'Magnum P.I.' (minus the 'stache).
Credit: Karen Neal/CBS

Welcome to Ad Age's Wake-Up Call, our daily roundup of advertising, marketing, media and digital news. What people are talking about today: "So how's your week been?" That was CBS Corp. CEO Leslie Moonves' opening line at the network's upfront, where he got a standing ovation, as Ad Age's Jeanine Poggi writes. (It wasn't clear who exactly was clapping, though: buyers, executives from CBS affiliates and other CBS employees were all in the room.) For Moonves, it's been quite a week. CBS launched a legal showdown with its controlling shareholder, the Redstone family's National Amusements, which wants to reunite CBS with Viacom. Then came the upfront. Moonves spoke only briefly to plug CBS' lineup to media buyers, and he skipped the network's annual upfront press breakfast entirely, Poggi reported earlier in the busy day.
CBS's president of entertainment, Kelly Kahl, said at the breakfast that Moonves sent his regards: "But the number of questions he couldn't answer outnumber the ones he could, so he thought it was a good idea to sit this one out."
Stephen Colbert sums things up nicely: "CBS has some of the most exciting legal dramas and some great TV shows," he quipped, as noted in Variety. If you need to get up to speed on the details of the legal action, the Los Angeles Times has a good explainer. The stakes for CBS' CEO are high: "Should Moonves and other CBS board members lose their case against the Redstones, his illustrious career could be over," the Times writes.
What's old is new: CBS is resurrecting TV journalism sitcom "Murphy Brown" and crime drama show "Magnum P.I." But don't worry, they've been updated to reflect the times: The actor who takes over Tom Selleck's role, Jay Hernandez, conspicuously lacks a mustache in the trailer. But don't give up hope. Hernandez told TV Guide: "Just wait! Watch the show, there might be something that people who need the mustache might feel satisfied with." Perhaps we have some ridiculous fake-mustache spy disguises to look forward to, like in "The Americans" on FX. (Which -- on a side note -- is so, so good this season.)
Daggers: Turner President David Levy put out a pretty strongly worded memo: "We are in a new era of media and it's time to retire the Nielsen television metric. While it undoubtedly served its purpose, it no longer fully captures how to successfully measure an audience in today's landscape." Read more about it in the upfronts diary from Anthony Crupi, who surely must be the first-ever Ad Age reporter to use the term "boner" in a headline. It was a reference to a Samantha Bee upfronts joke; we won't get into it here, so just read Crupi's diary.
Friendly reminder: You can still sign up for Ad Age's pop-up upfronts newsletter, taking over the Media Buzz email this week only, right here.

Ad fraud, brand safety and frustrating ads
The World Federation of Advertisers, a global group representing marketers, has a new charter setting out demands for cleaning up the digital ecosystem. It's a broad effort: The WFA worked with Procter & Gamble, Unilever, Mastercard and Diageo on the guidelines, as well as with marketers' associations in the U.S., Japan, Germany, France -- and China, which has its own digital platforms and an internet that's largely separate from the rest of the world. Here's a sampling of bullet points from the charter, released during a meeting in Tokyo:
-- "Zero tolerance to ad fraud with compensation for any breach"
-- "Strict brand safety protection: Advertisers require platforms and publishers to accept responsibility for the content carried on their sites …"
-- "Improve the consumer experience: Consumers are becoming increasingly frustrated with ads that disrupt their experience, interrupt content, slow browsing or eat up their data allowances."
The guidelines build on concerns that P&G and Unilever have been raising; read the WFA's announcement here.

Head & Shoulders and Hearts & Science
Omnicom's data-driven marketing agency Hearts & Science was formed in 2016 partly to service Procter & Gamble. It just suffered a blow. As Ad Age's Jack Neff writes, P&G "consolidated most media duties for its North American hair-care business with Dentsu Aegis Network's Carat." Hearts & Science was the incumbent on much of that business, including on Pantene, Head & Shoulders and Herbal Essences. The silver lining, such as it is, for the shop: It "remains on the broader P&G North American media roster alongside Carat."

Just briefly:
A tale of two sons: Fox revealed its executives for "New Fox" in anticipation of a proposed deal with Walt Disney closes. Lachlan Murdoch will serve as chairman and chief executive, and Rupert Murdoch will be co-chairman, writes Ad Age's Jeanine Poggi in the Wednesday upfronts roundup. Rupert Murdoch's other son, James, is reportedly looking to exit once the deal happens (and CNN points out that his name wasn't even in the news release).

Curb your enthusiasm: "The Senate has voted to save net neutrality, but don't get your hopes up" if you want the regime protected, writes The Verge. The House isn't likely to follow suit, just part of a broadly uphill battle.

Mr. Zuckerberg goes to Brussels: Facebook's Mark Zuckerberg plans to speak with members of the European Parliament, maybe next week, in "the latest stop in a wide-ranging apology tour over the social network's use of people's personal data," The New York Times says. The grilling there is likely to be considerably more difficult than he faces in Washington, D.C.

YouTube: YouTube Music launches Tuesday, the streaming service says in a blog post. Also, YouTube Red is getting rebranded as YouTube Premium. It's still ad-free, but the price is going up (good timing, given the enthusiasm right now for "Cobra Kai"). Read more in Gizmodo.

Hmmm: Toys 'R' Us is putting "sex-toys-r-us.com" on the auction block, as noted in Ad Age's Marketer's Brief. Yes, the beleaguered retailer really controlled the website, but no, it was never going to use it (it just wanted to make sure nobody else would).

Sorry: The Cheesecake Factory says it let go two Miami employees who made disparaging comments about a customer's Make America Great Again cap. "No guest should ever feel unwelcome in one of our restaurants and we are sorry," the chain wrote on Twitter.

Just saying no: Mondelez shareholders rejected the company's 2017 compensation plan, "which included a nearly $60 million pay package to two CEOs," Crain's Chicago Business writes. But! It was a nonbinding vote.

Headline of the day: "Sadly, Airbnb Cereal is totally inedible," writes Simon Dumenco in Ad Age. No, Airbnb is not planning a Cheerios competitor: It just created its own font and for some reason named it Cereal.

Creativity pick of the day: Perhaps you're aware there's a royal wedding happening this weekend? It's such a momentous event that KFC is marking the occasion with a "Kentucky Fine China" chicken bucket, which is handmade by an English pottery manufacturer, as Ad Age's Alexandra Jardine writes. She adds: "According to Meghan Markle, Prince Harry proposed to her over a roast chicken dinner." Which, as Jardine notes, is not exactly fried chicken, but hey, close enough.