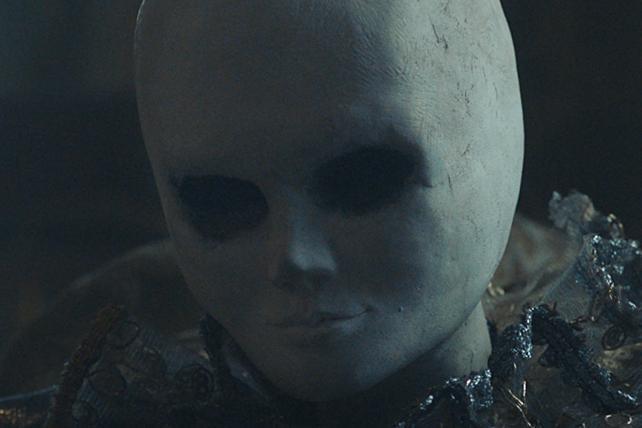 Spotify's horror spoof was deemed too scary by a U.K. watchdog.
Credit: Spotify

Welcome to Ad Age's Wake-Up Call, our daily roundup of advertising, marketing, media and digital news. You can get an audio version of this briefing on your Alexa device. Search for "Ad Age" under "Skills" in the Alexa app. What people are talking about today: "The Conners" had a strong debut on ABC, and it seems killing off Roseanne Barr's character didn't kill the show's appeal. According to Nielsen preliminary broadcast nationals, the premiere of the "Roseanne" spinoff averaged 10.5 million viewers. As Anthony Crupi writes in Ad Age, that's not as high as the 18.4 million viewers who watched the first episode of "Roseanne" in March, but it's the strongest debut for a new show this fall.
What Roseanne says: "I AIN'T DEAD, BITCHES," tweeted Barr, who was fired months ago for a racist tweet. She also released a joint statement with her rabbi regretting that her character was killed off from an opioid overdose. They said it lent "an unnecessary grim and morbid dimension to an otherwise happy family show."
A bit of history: The original "Roseanne" went on the air on Oct. 18, 1988, exactly 30 years ago today. That was before the fall of the Berlin Wall, before the first Gulf War and before the invention of the World Wide Web.

Creepy
Spotify made a video parody of a horror flick, and it's actually pretty creepy. The ad is about a skull-faced doll that terrorizes anybody who plays the catchy Camila Cabello song "Havana." ("Killer songs you can't resist" is the tagline.) The ad is a few months old, but it's in the news because the U.K.'s Advertising Standards Authority ruled that it's "likely to cause undue distress to children," NPR reports. A parent complained after the ad turned up on a YouTube channel for older kids. As NPR says,

"In 60 seconds, the ad manages to showcase a medley of horror film tropes: a maniacal children's toy, a long and dark hallway, a young woman screaming in terror, and a startling over-the-shoulder apparition in a steamy mirror."

Spotify apologized for causing any distress and told NPR the ad "was created as a tongue-in-cheek horror parody." Which, obviously, is a concept that's hard to explain to a freaked-out 7-year-old.

The action taken? According to the ASA ruling: "We told Spotify to ensure that future ads did not cause distress to children without justifiable reason, and to ensure ads that were unsuitable for viewing by children were appropriately targeted." Sounds like a Spotify win.

Transparency?
After the 2016 U.S. presidential election, when misinformation campaigns and messages from Russian trolls filled the platform, Facebook worked to be more transparent about the political ads it runs. Users buying political ads need to confirm their identity, for example, and Facebook now has a political ad archive that anybody can look at. But shadowy practices are still going on, and people buying political ads can nonetheless hide their identities from the public, according to new articles from The Atlantic and The New York Times. The Atlantic looks at a secretive liberal group calling itself News for Democracy, a big spender, and concludes:

"Three weeks out from the 2018 midterms, we still know very little about the financial backing, operation, or ultimate goals of one of the biggest political-ad purchasers on Facebook in the run-up to the election."

The New York Times, meanwhile, narrows in on anonymous Facebook ads attacking the Democratic candidate in Virginia's 10th Congressional District. The Times writes that the advertiser, whose identity is unknown to the public, "was able to remain anonymous by taking advantage of a loophole in Facebook's policy." Facebook told the Times it's at work on improving the disclosure feature.
D'oh: Kevin Roose, who wrote the Times' story, tweeted that the digital ad running next to his story was … a Facebook ad promoting the company's work on elections transparency. "*incredible* ad placement on this story," he tweeted.

Just briefly:
Data dump: Twitter has published massive quantities of tweets and other data that shed light on "how bad actors outside the U.S. sought to manipulate social-media discourse in their home countries and abroad," Bloomberg News reports.

EBay vs. Amazon: EBay has filed a lawsuit against Amazon accusing the giant "of illegally poaching sellers on its marketplace via eBay's internal messaging system," The Wall Street Journal reports.

Martin Sorrell: The former WPP CEO seems to have a few more plans for his new venture, S4 Capital, after acquiring Dutch digital production company MediaMonks. As Ad Age's Megan Graham writes, at Programmatic I/O this week "Sorrell hinted that there is more to come, and quickly: 'I'd like to do probably three things. We've done one. I'd like to do two more things fairly quickly. And then I think I'd probably like to rest.'"

Tab panic: A shortage of Coca-Cola Co.'s Tab, the diet soda and '80s throwback brand, is causing loyal fans to panic, The New York Times writes. One fan described trying to track some down: "It's almost like a drug deal. Hey man, can you get me a fix?' I'm a little bit traumatized."

Quote of the day: Ad agency employment is going strong. But Frances Webster, CEO of indie agency Walrus, tells Ad Age Editor Brian Braiker that "this market has run its course. We're all anticipating there's going to be some sort of correction. I don't think it's going to be like the mortgage crisis, but we'll definitely feel it." Listen to their full conversation on the Ad Lib podcast.

Strategy of the day: KitchenAid, a 99-year-old brand, is putting a trendy buzzword at the center of its first branding campaign. As Ad Age's Adrianne Pasquarelli writes, it says it's identified its customers as "makers," the kind of people with well-worn knives and blisters from oven burns.

Ad of the day: George Clooney is a knight in shining armor in a new Nespresso ad. Ad Age's I-Hsien Sherwood writes that Clooney's character slays a dragon, saves the kingdom and gets praise from the queen, played by Natalie Dormer ("Game of Thrones"). What does Sir Clooney want as a reward? A Nespresso, of course.