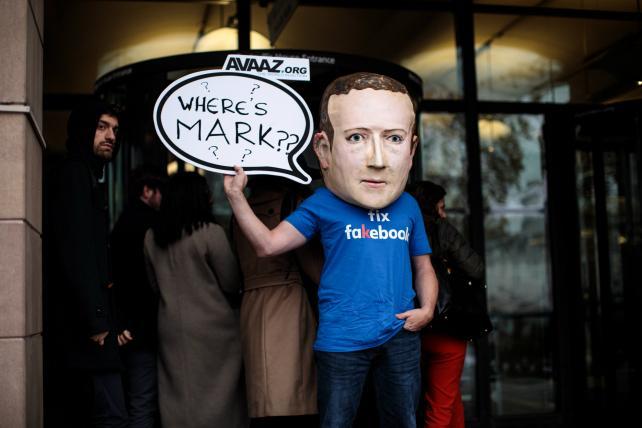 What people are talking about today
Let's start things off with a laugh. You may have heard that Chinese cities are using facial recognition software to catch law-breakers and jaywalkers. But artificial intelligence has its limitations. An AI system in the city of Ningbo flagged Dong Mingzhu, chairwoman of appliance maker Gree Electric, for crossing against a red light. But as Chinese news outlet Caixin reports, "it turned out not to be Dong, but rather an advertisement featuring her face on the side of a bus …"

An empty chair. And cats.
Lawmakers from nine countries -- from the UK to Brazil to Singapore -- gathered in London to grill Facebook about its policies. CEO Mark Zuckerberg was invited but didn't attend, and an empty chair symbolized his absence. Richard Allan, Facebook's VP of public policy, answered questions in his stead, about hate speech, disinformation and what else Facebook might be hiding. It was not a fun day to be Allan. Ad Age's George Slefo pulled out the highlights of the exhange, including this one:

Nele Lijnen, Belgium: "Do you know the expression, 'Sending your cats?'"
Allan: "No."
Lijnen: "Well, I'm from Belgium and in my language it means not showing up. So dear colleagues, we can say Mark Zuckerberg sent his cats…"

On a side note, "sending your cats" is definitely an expression we need to import into English.
In other Facebook news: Here's a more positive development for the company ... "Facebook and Instagram have cleared a key hurdle toward accredited third-party measurement of ad viewability," Jack Neff writes in Ad Age. The Media Rating Council says the social networks have passed an audit of its internal data collection process.

Takedown
The FBI and tech companies worked together to bring down a complex, massive ad fraud scheme; the U.S. Department of Justice says eight people have been indicted for allegedly causing tens of millions of dollars in losses. Five are at large, while three have been arrested -- in Malaysia, Bulgaria and Estonia -- and are awaiting extradition to the United States. BuzzFeed News has the backstory about how the FBI worked with Google, bot detection company White Ops and others to unravel the scheme, dubbed "3ve." BuzzFeed writes:

"At its peak, 3ve involved about 1.7 million PCs infected with malware, an array of servers that could generate mountains of fake traffic with bots, roughly 5,000 counterfeit websites created to impersonate legitimate web publishers, and over 60,000 accounts with digital advertising companies to help fraudsters receive ad placements and get paid."

What's important here: Despite all the money lost to ad fraud, as BuzzFeed notes, it's unusual for people behind these schemes to face real consequences.

Still in vogue?
Troubled Condé Nast, whose titles include Vogue, Vanity Fair and The New Yorker, is looking for a new CEO as Bob Sauerberg gets ready to step down. His successor will run both Condé Nast and Condé Nast International, which are getting combined. Simon Dumenco writes in Ad Age that the next leader of the magazine empire "has an even more torturous task than that faced by Sauerberg, as the company's big flagship titles—which once helped keep more marginal titles afloat—have lately seen continued dramatic revenue declines. The New York Times and others have reported that Condé lost more than $120 million last year." The company's internal memo promises "an exciting next chapter for Condé Nast." The word "exciting" seems a bit over-optimistic. Whatever happens next will be interesting to watch, though.

Gambling: "Major League Baseball named its first official gambling partner, part of a new multiyear marketing agreement with MGM Resorts International," Bloomberg News writes. If this headline is giving you deja vu, it's because the NBA and NHL have similar deals with MGM.

Golfing: "Tiger Woods has inked a multi-year global partnership with Discovery and GolfTV, its new streaming venture with the PGA Tour," Deadline reports.

Liar liar: "Consumers are far more likely to punish companies for lying than anything else, according to the report by research company Morning Consult," Ad Age's E.J. Schultz writes.

Creativity pick of the day: How many visual metaphors are there for the female genitalia? A lot, as a new ad proves. It features oysters, coin purses, fortune cookies, grapefruits, medieval corridors and more. The spot is a taboo-breaking celebration of the vulva by AMV BBDO for the Libresse line of washes, wipes and liners. Called "Viva La Vulva," it opens with a woman holding a conch shell in front of her privates, and then the shell starts singing. (Almost as surprising: The woman in the ad has stretch marks, thigh fuzz and tattoos!) Libresse scored a hit last year with a groundbreaking ad about menstruation that won a Grand Prix at the Cannes Lions International Festival of Creativity. Check out the new spot here, and read more by Ad Age's Alexandra Jardine.