Monday Wake-Up Call: Friendsgiving, a J. Crew shakeup and ageism in the industry 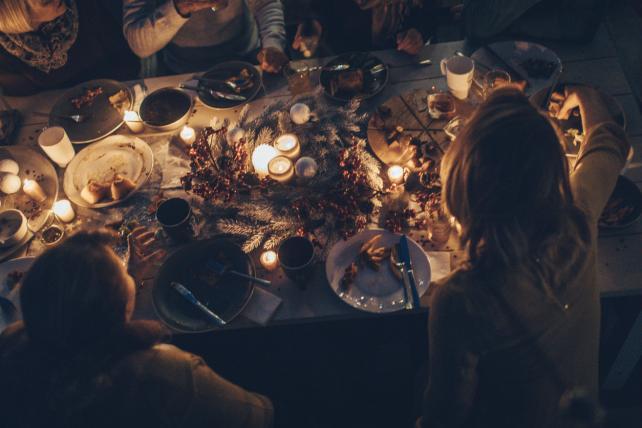 What people are talking about today
J. Crew has been fighting to freshen up its image, and now it's losing its chief executive and its chief marketing officer. This weekend the company announced the departure of Chief Executive Jim Brett, who will be replaced by a team of four senior J. Crew execs, Ad Age's Adrianne Pasquarelli reports. CMO Vanessa Holden is also leaving. She had resigned ahead of the announcement about Brett, and the company says the two exits are not connected. Pasquarelli writes:

"In September, the brand debuted a digital campaign, 'New Crew," to support a brand relaunch featuring more diversity in both the sizes of its clothes and the models in its advertising. At the time, Holden explained that J. Crew wanted to communicate to shoppers who have drifted away in recent years that the retailer is for everyone, including the non-models featured in the campaign."

After a period of decline, J. Crew sales have bounced back a bit this year, but not enough, one analyst says. These are uncertain times for retailers; the CEO of Victoria's Secret reportedly is exiting amid questions over whether the brand's sexy image is still relevant in 2018. Sears, Toys R Us and Nine West are among the brands that filed for bankruptcy protection this year. J. Crew is no longer in its heyday, but things could be worse.

Aging in advertising
In Ad Age's print issue this week, Pasquarelli zooms in on a big, and rarely talked about, ad industry problem: ageism. Pasquarelli writes that while age discrimination doesn't get as much attention in the industry as sexism or racism, there's a quiet movement forming to challenge what some see as widespread bias against older workers. Last month, for example, an age discrimination suit was filed against WPP agency Landor by a former employee. Digital transformation, she notes, is partly to blame for the industry's ageism problem:

"Both marketers and agencies are eager for tech-savvy youth who look the stereotypical part of creative hipster, hoodie and all. That doesn't always translate well for anyone sporting a few gray hairs."

Friendsgiving
Maybe you celebrated Friendsgiving this weekend, sharing a potlock meal (maybe a boozy one) with friends. Friendsgiving is trendy and popular with millennials, and marketers naturally have seized on it. Target has a Friendsgiving category on its website, including a scented candle that smells (of course) like pumpkin spice. Taco Bell has offered Friendsgiving recipes for a few years; this year it suggests you make something called "Fire Tortilla Chip Crusted Chicken." And an Absolut digital ad proclaims, "Nothing makes you more thankful for Friendsgiving than Thanksgiving."

So where does the newish tradition originate? Vox looked up what Merriam-Webster has to say, and it seems ad execs and reality TV are to blame:

"Merriam-Webster argues that what shot 'Friendsgiving' into the national consciousness was the double-whammy of a 2011 Bailey's Irish Cream ad campaign and, rather hilariously, an episode of 'The Real Housewives of New Jersey' that aired that same year."

There are clips of that "Real Housewives" episode here if you want to reminisce. (Fun factoid: One cast member actually wore leopard print and a mink apron to cook in.)

Musical chairs: If you're having a hard time keeping track of the musical chairs in the media world right now, Ad Age's Jeanine Poggi has a handy chart. The most recent move: Channing Dungey is leaving the role of president of entertainment at ABC.

Facebook part 1: "The social network is unlikely to lose any marketing dollars despite being rocked by yet another scandal," Ad Age's Garett Sloane writes. (Which scandal? See The New York Times' report from last week, "Delay, Deny and Deflect: How Facebook's Leaders Fought Through Crisis.")

Facebook part 2: Former Facebook security chief Alex Stamos writes in a Washington Post op-ed that for a time "Facebook stuck to a public-communications strategy of minimization and denial. It was finally jettisoned in early 2018, but the damage to trust has been massive and will take years to repair."

Now showing on YouTube: In case you missed Sloane's scoop in Ad Age on Friday, YouTube has been showing ad-supported Hollywood movies so people can watch them for free.

Meanwhile in Europe: "Google's top news executive has refused to rule out shutting down Google News in EU countries, as the search engine faces a battle with Brussels over plans to charge a 'link tax' for using news stories," The Guardian reports.

Ad of the day: The John F. Kennedy Presidential Library is tweeting famous quotes from the 35th president using the Twitter handle @JohnFKennedy. Which means that "people looking for words of wisdom from a U.S. president on Twitter now have an alternative option to Donald Trump," as Ad Age's Alexandra Jardine writes. Sample quotation: "And I look forward to an America which commands respect throughout the world not only for its strength but for its civilization as well. #WordsCount." The Kennedy campaign also tops our list of the week's top creativity, compiled by I-Hsien Sherwood and Alfred Maskeroni. Check that list out here for your #MondayMotivation.