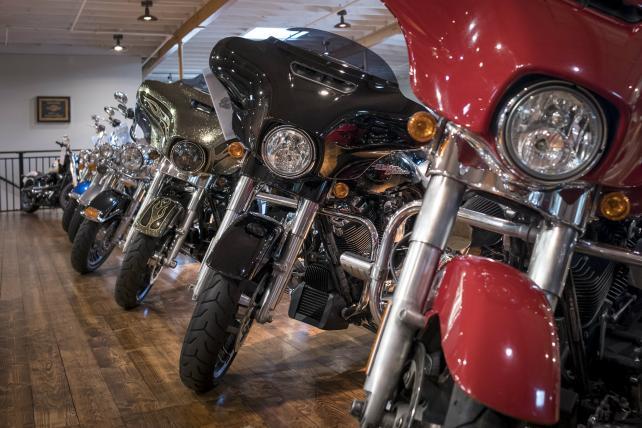 Welcome to Ad Age's Wake-Up Call, our daily roundup of advertising, marketing, media and digital news. You can get an audio version of this briefing on your Alexa device. Search for "Ad Age" under "Skills" in the Alexa app. What people are talking about today: President Trump says it would be "great" if bikers boycott Harley Davidson over its plans to shift some production overseas. A day earlier, Trump had welcomed a "Bikers for Trump" group into his golf club in Bedminster, New Jersey. "Quite a scene - great people who truly love our Country!" he tweeted. On Sunday, he added:

"Many @harleydavidson owners plan to boycott the company if manufacturing moves overseas. Great! Most other companies are coming in our direction, including Harley competitors. A really bad move! U.S. will soon have a level playing field, or better."

To recap, the president is cheering on Americans who want to boycott a brand founded in Milwaukee in 1903. A brand that he used to call "a true American icon, one of the greats."
The backstory: Harley-Davidson said production of bikes for the European market would move outside the U.S., because it was the only "sustainable option we have to make motorcycles available and affordable to EU customers." The company was reacting to European Union tariffs that were retaliation for U.S. tariffs on imported steel and aluminum.
The kicker: The founder of Bikers for Trump, Chris Cox, used to sell U.S.-made pro-Trump T-shirts, but now he goes with the made-in-Haiti variety. He told The New York Times: "If I get a T-shirt made in the U.S.A., it's going to cost about $8 more. I looked far and wide to try to get a shirt made in America, it's just they get you, they gouge you."

Pet acupuncture and chicken diapers
"Farm-to-table" pet chow is apparently a trend now. In an age of pampered cats and dogs, Ad Age's Adrianne Pasquarelli delves into the fast-growing petcare industry. On the extreme end is a luxury pet resort in Florida offering flatscreen TVs, filtered water, classical music and even acupuncture. Mass brands are getting in on the premiumization trend too, Pasquarelli writes: Mars Petcare has a new line that boasts "grain-free, animal-based recipes with multiple sources of prey and nutrient-rich organs, which pets' ancestors sought first after the hunt to help them thrive."
What's driving the trend? "Millennials are not just pet owners—they are 'pet parents,' spending more money on and giving more to their animals than previous generations," as one analyst tells Pasquarelli. Also: Chicken diapers are apparently a sought-after item. And they're much fancier-looking than the diapers worn by human babies.

An experiment
The Dodo, the publisher that makes videos for animal lovers, has hit on a formula for success on Facebook Watch, the year-old Facebook video hub, with five of the 15 most-watched shows there, as Ad Age's Garett Sloane writes. But

"while The Dodo seems to be doing well, it and other publishers—including Insider, USA Today, Tastemade and Bloomberg News—are still knee-deep in an experiment, both from their end and Facebook's, to see if there's money to be made on Watch. The hub is an unsteady environment for media companies at the mercy of Facebook's ever-shifting ad strategies."

The article is titled "The Dodo in the coal mine." (By the way, one of The Dodo's shows is "Pittie Nation," about pit bulls; a recent episode was called "Pit Bull Screams Like a Person When He's Happy." Pretty hard to not to click, eh?)

The Hispanic market
Ad Age's 2018 Hispanic Fact Pack is out, with info about marketing, media, agencies and demographics. (One quoteable statistic: The median age for Hispanics in the U.S. is 29, compared to 41 for non-Hispanics.) Ann-Christine Diaz also looks at notable U.S. Hispanic creative work from the past year. And Julie Liesse explains why Hispanics are signing up for skinny bundles, and why radio is such a good way to reach them too. Last year, Liesse writes, about 96 percent of Hispanics tuned into radio every week, according to Nielsen's Audio Today 2018.

Just briefly:
I'll be watching you: An Associated Press investigation "found that many Google services on Android devices and iPhones store your location data even if you've used privacy settings that say they will prevent it from doing so." The report says the findings were corroborated by computer science researchers from Princeton.

United front: On Thursday, "more than 100 newspapers will publish editorials decrying Trump's anti-press rhetoric," CNN reports. The Boston Global coordinated the effort, the report says. Each publication will write its own editorial, but on the same theme.

Back-to-school in 2018: "Brands such as Five Star, which makes binders and folders, and Red Bull, the energy drink maker, have released new back-to-school filters on Snapchat," The Washington Post reports in an article about marketing to kids who shop on their phones.

Faux pas: Jaclyn Johnson, founder of the buzz-y Create & Cultivate meeting of female business leaders, shares what not to do when you host a conference. Her own event is "not in a hotel conference room, there's amazing food, it's not a gross box lunch," she tells Ad Age's Jeanine Poggi.

Creativity pick of the day: A spot from Land Rover is the Monday morning escapism you might need. It's set in a remote town in the Himalayas that's known as the "Land of Land Rovers," with over 40 vintage models used for driving up steep routes. As Ad Age's Alexandra Jardine writes, "the documentary-style spot depicts how the community has an almost spiritual connection to the brand, and even if you're someone only using a Land Rover to do the school run, it might make you feel like a pioneer." Check it out here.