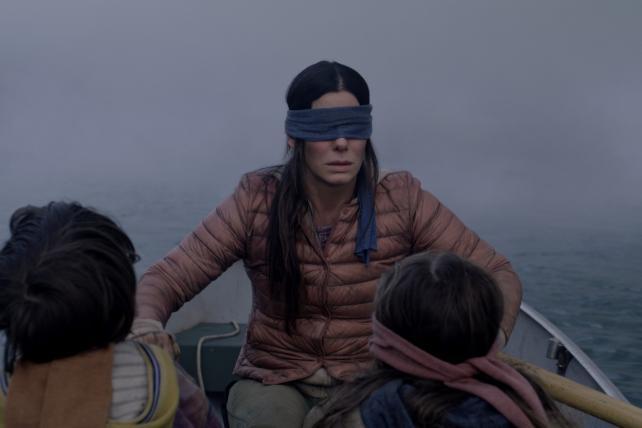 What people are talking about today
Though it's a slow week for news, there are a lot of headlines about Netflix -- probably because binge-watching has become a holiday tradition, up there with mistletoe and mall Santas. Netflix's Sandra Bullock thriller "Bird Box" is a hit, and Netflix is warning people to be careful if they join in a weird meme that has emerged out of it. In the movie, people wear blindfolds to avoid seeing an ominous presence that's driving everyone to commit suicide. The meme involves blindfolding yourself and filming it; one video showed a blindfolded toddler careening into a wall. Netflix tweeted, "Can't believe I have to say this, but: PLEASE DO NOT HURT YOURSELVES WITH THIS BIRD BOX CHALLENGE." But isn't there some tricky reverse psychology going on here? By tweeting about the meme, Netflix is basically fanning the flames to make it spread.
But wait, there's more: In other Netflix marketing-related news, Netflix's choose-your-own-adventure episode of nightmarish, futuristic "Black Mirror" is out. The episode, "Bandersnatch," gives some extremely unsubtle clues about how marketing messages could be woven into this interactive format. As The Verge writes:

"The first choice Bandersnatch presents is what cereal the protagonist should eat: Frosted Flakes or Sugar Puffs? That's seemingly a red herring with minimal effect on the narrative. But it showcases the most blatant marketing technique Netflix can deploy with interactive content: programmatic product placement."

One final Netflix headline: On a more serious note, Saudi Arabia asked Netflix to remove an episode of Hasan Minhaj's show "Patriot Act" in which he mocked the kingdom's crown prince. Netflix reportedly complied and prevented the episode from showing locally, and now it's getting criticism from human rights groups, The Associated Press reports. Amnesty International says that "Netflix is in danger of facilitating the Kingdom's zero-tolerance policy on freedom of expression." Netflix, meanwhile, says it had to comply with Saudi law.

January surprise
Apple sent a ripple of worry through the markets by warning late Wednesday that its quarterly revenue would come in below expectations; it blamed economic conditions in China and the U.S.-China trade war for a slowdown in iPhone sales there. It was the first time in over 15 years that Apple cut a quarterly revenue forecast, The Wall Street reports. And it's not just about China: Apple CEO Tim Cook wrote in a letter to investors that "in some developed markets, iPhone upgrades also were not as strong as we thought they would be." Reuters called Apple's message "a gloomy omen for Wall Street bulls." And investor Jeffrey Gundlach told CNBC, "This is the kind of stuff that happens in a bear market."

Meanwhile in the ad world
There's more uncertainty ahead for beleaguered MDC Partners in 2019. For months the company has been looking for a new CEO and weighing strategic changes, including a possible sale; now a shareholder wants to replace three current board directors with new ones, Ad Age's Megan Graham writes. Shareholder FrontFour Capital says it owns more than 5 percent of voting securities of MDC, whose holdings include agencies like 72andSunny, Anomaly, Crispin Porter & Bogusky and Forsman & Bodenfors, In an SEC filing, FrontFour said it sent a letter to MDC announcing its plan to call a special meeting of shareholders to replace three board members, including MDC's former CEO, Scott Kauffman. Read Graham's full story here.

Just briefly:
New year: Ad Age checked in with execs to find out what's ahead in 2019. Here's one prediction: "There's going to be a much longer arc around this movement around data transparency and management," says Jen Wong, Reddit COO. "I can see ... where managing your own personal data is just a part of your life, like managing your finances."

Meanwhile in Iran: "Authorities in Iran are preparing to block access to Instagram, extending their crackdown on social media to the only major platform still freely available," Bloomberg News reports.

Streaming: "The Roku Channel is expanding beyond ad-supported programming into pay TV by offering subscriptions to networks like Showtime and Starz," Garett Sloane writes in Ad Age.

Here come the brides: David's Bridal, which filed for bankruptcy protection last year, is trying to turn around its fortunes with a "campaign emphasizing non-traditional brides, such as female couples, or brides who are already mothers," Ad Age's Adrianne Pasquarelli writes.

Ad of the day: What's the best way to fight a New Year's Eve hangover? Sometime super-greasy, super-salty fries do the trick. An amusing, strangely poetic spot from McDonald's New Zealand and the DDB office there looks at revelers awakening post-party, dazed, and later welcoming their McDelivery couriers like saviors. Read more from Ad Age's I-Hsien Sherwood, and be thankful it's already Jan. 3. Hopefully you're feeling better by now.