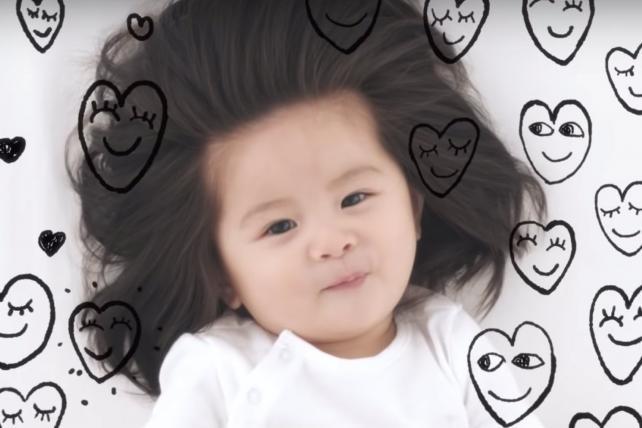 What people are talking about today
A Japanese baby with an amazingly full and fluffy head of hair went viral on the internet. And she found her calling earlier than most: Baby Chanco is already a Pantene model. "We went straight to her mother because Chanco's personality and special character matches our image for women we want to support," Yoshiaki Okura, P&G Japan hair care associate brand director, told People magazine. Pantene also made a short film about Baby Chanco, a tale about embracing what makes you different. It's called "The Hairy Tale."
Also: In other hair-related news, chicken chain KFC is giving people free bowl haircuts today in a promotion for its $3 KFC Famous Bowls. For more explanation about the thinking behind the stunt, read the Ad Age Marketer's Brief. Then head over to Ludlow Blunt in Brooklyn today to get your crop. And if you go, we want to see photos.

Tastes great, less swilling
Heineken thinks that Americans are thirsting for non-alcoholic beer, and it's got a brand to cater to them. E.J. Schultz writes that "the brand, called Heineken 0.0, first debuted in Spain in 2016 and is hitting U.S. stores and bars now amid signs that more people are swearing off alcohol, or at least drinking less." The ads show people drinking it in settings where they wouldn't usually guzzle beer -- like at a board table and while getting behind the wheel. If you're skeptical about this taking off, consider this: The brand says that in the U.K., where 0.0 launched in late 2017, it accounts for almost 5 percent of total brand Heineken sales.

An experiment
Soon you'll be able to watch parts of some NBA games on Twitter -- but there are a lot of unusual limitations to the streaming deal, as Recode reports. Only the second half of some games will be streamed, and the camera will stay zoomed in on a single player. Which player? That will be voted on by fans during the first half. Recode writes:

"As more and more people stop paying for traditional TV, professional sports leagues and their broadcast partners are trying to figure out how to translate great TV content, like live sports, to places that aren't television, like Twitter, Facebook, Amazon, and Google. At the same time, rights holders like Turner are trying to protect the content they pay billions of dollars annually to broadcast on TV."

Despite the oddness of the setup, it still sounds worth checking out, for a totally different way of viewing a game -- er, half a game.

5G and a flying car
So how excited are we supposed to be, exactly, about 5G and its promise of super-fast connectivity? Realistically, how long do we still have to wait? George P. Slefo, who's part of the Ad Age team at CES in Las Vegas, weighs in:

"Although it's certainly the talk of CES, one high-level executive from a leading carrier says mass deployment of 5G technology won't arrive until at least 2021. Exhibitors, however, will make you feel like it's coming out tomorrow…"

Read the rest of Slefo's story for details about what he saw on MediaLink's CES tour, from the 5G tech to the self-driving air taxi.
More from CES: Voice and smart speakers are big themes as CES. Ad Age Editor Brian Braiker talked about how marketers can use it in separate conversations with NPR's chief marketing officer, Meg Goldthwaite, and with former Droga5 CEO Andrew Essex. (Essex's take: "Brands should mostly be scared of voice because voice has a tendency to get rid of brands. People want toothpaste and toilet paper. They don't necessarily want Crest.")

Just briefly:
By the numbers: President Donald Trump's TV address on border security, and the Democratic rebuttal to it, drew around 40 million viewers. Anthony Crupi writes in Ad Age that it "likely will stand as the fourth most-watched broadcast of 2019, trailing only CBS's coverage of Super Bowl LIII and the NFC and AFC Championship Games."

Goodbye: Carlos Sánchez, who spent decades playing Juan Valdez, the pitchman for Colombian coffee, has died, The New York Times reports. He was 83.

Adventures in branded content: The UK has a hit TV show called "Lego Masters" -- a competition to build the best Lego creations. (The Independent compares it to "The Great British Baking Show," but "with lots of polyethylene bricks.") Now, Brad Pitt's Plan B Entertainment is among the partners working to bring it to the U.S., along with Endemol Shine North America and production company Tuesday's Child, Variety reports.

Video of the day: Watch Stephen Colbert explain the government shutdown using beer brands. (Pulling brewskies from under his desk, he says, "Nothing like this has ever happened under President … Busch. Or his son, Busch Light.") Ad Age's Simon Dumenco notes the presence of 15 real beer brands in the sketch, from Amstel to Stella Artois, along with "a certain made-up beer brand called 'Mueller.'"

Creativity pick of the day: Dagoma, a maker of 3D printers, came up with a clever plot to try to thwart people looking online for blueprints of printable guns. As Ad Age's I-Hsien Sherwood writes, it copied existing blueprints, altered them slightly so the guns wouldn't work, and seeded the fake blueprints out online. As Sherwood writes, "The goal is not only to make guns printed with the plans inoperable, but also to frustrate users who will spend time and money for materials on guns that don't work, potentially pushing them to give up getting a firearm at all." Dagoma says the fake plans have been uploaded 13,000 times. Check it out here.