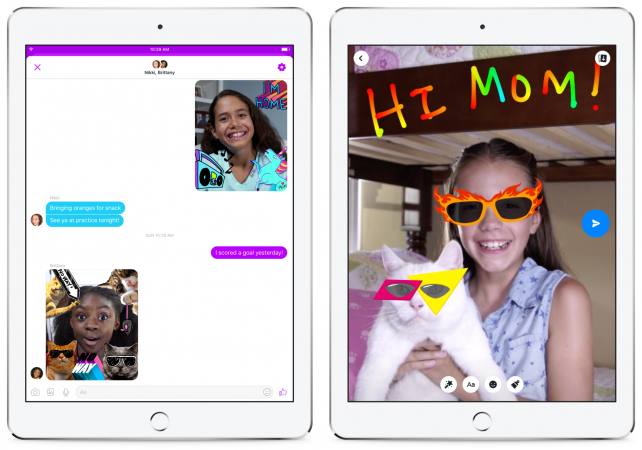 What people are talking about today
U.S. snowboarder Shaun White won three gold medals at the Winter Olympics, but he's also facing scrutiny about a sexual harassment allegation from his past, which was settled last year out of court last year. White was asked about the case at a news conference, and he responded, "honestly, I'm here to talk about the Olympics, not gossip." Then he promptly had to start apologizing for his "poor choice of words."

Ad Age's Simon Dumenco breaks down what you have to know about the snowboarder, who reportedly has endorsements deals with brands from AT&T to GoPro. Dumenco writes:

"So far, brands seem to be taking a wait-and-see approach; none of White's known sponsors have publicly distanced themselves from him as of this writing."

Facebook's Messenger Kids
Facebook's controversial new Messenger Kids app just came to Android, after first hitting iOS in December. It's for children as young as 6, and it doesn't have ads. Facebook says it worked with experts to develop it, but there's been a lot of blowback. Now it's facing even more: Wired reports that many of the experts Facebook tapped had received funding from Facebook, though it failed to mention that. As Wired writes:

"At least seven members of Facebook 13-person advisory board have some kind of financial tie to the company."

Given all the scrutiny that Facebook has been under lately, how is it the company didn't realize this might become an issue?

Annoying ads
Today is the launch day for Google Chrome's move to block ads that have been deemed "annoying." It's part of an effort from the Coalition for Better Ads, an industry group that includes tech giants and publishers, to make the browsing experience better for consumers and undermine the demand for outside ad-blocking software. As Ad Age's George Slefo writes,

"The plan was to eliminate the worst ad experiences for users—like videos that play automatically with the sound on—in order to reduce the siren call of blocking software that lies outside the industry's control."

But there are some new concerns. As Slefo writes, Google now acknowledges that the Coalition for Better Ads largely used Google's own data to start determining which ads are annoying. At first, the Coalition just said the data came from "members." That omission has raised questions about transparency. Transparency seems to be a theme today (see the Facebook item above).

The FBI is worried about your cell phone brand
It's not every day that the FBI weighs in on what brands or products American consumers should or shouldn't buy. But that just happened. As CNN reports, "U.S. intelligence agencies issued a stern warning to Americans: Do not buy smartphones made by Chinese tech companies Huawei or ZTE."

Officials from the CIA, NSA, FBI and the Defense Intelligence Agency testified to the Senate Intelligence Committee that they see the Chinese smartphone makers as a security threat; there are fears China's government could use the Chinese-made phones to spy on Americans. Huawei says it operates in 170 countries, "where there is trust with governments and customers." China has had a hard time building strong brands that are well-known outside its borders, and Huawei is an exception, a big success story. It's popular in many markets aside from the U.S., where security concerns have long derailed its efforts. This is another big blow.

Just briefly:
The tragedy in Florida: After the school shooting in Florida that killed 17, The New York Daily News has a powerful cover. It shows the barrel of a gun, with the message "This is us." See it here.

Also: About a week ago, Ad Age put out a call to the creative community to produce work that confronts the issue of gun violence head on. The goal is to get real sponsors to support the strongest work. Read more here.

Out: After investigations into inappropriate conduct, Universal has fired Seth Byers, executive VP of creative strategy and research, Variety reports. And Josh Goldstine, president of marketing, is on administrative leave, the report says.

Rebekah Mercer speaks: In an op-ed in The Wall Street Journal, Rebekah Mercer, a major donor to conservative causes and owner of a minority stake in Breitbart News, says Steve Bannon "took Breitbart in the wrong direction."

USA Today: The paper has a new editor, Nicole Carroll, editor of The Arizona Republic and azcentral.com.

Disgrunted consumers: Last week, retailer L.L. Bean ended its famous, much-loved policy allowing for unlimited returns. Now it's getting sued for the decision in a breach of warranty lawsuit. Read more about it in Ad Age's Marketer's Brief.

Creativity pick of the day: First there was Pepsi's viral "Uncle Drew" ad campaign, featuring NBA star Kyrie Irving, and now there's a feature film to be released in June. Try to spot the Pepsi logo in the trailer (and you'll also notice a lot of Nike logos.) You can watch the trailer here, and read more about it by Ad Age's E.J. Schultz.