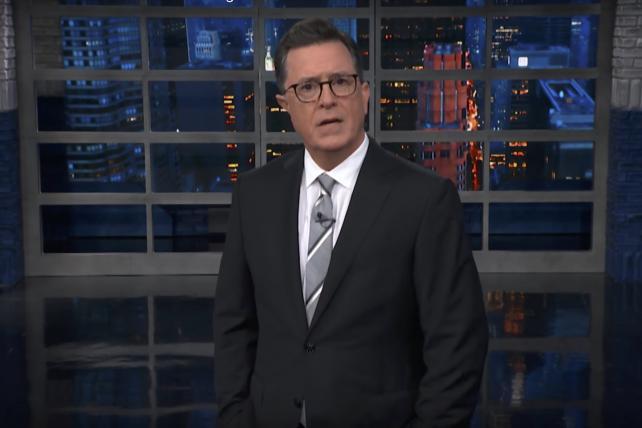 Welcome to Ad Age's Wake-Up Call, our daily roundup of advertising, marketing, media and digital news. You can get an audio version of this briefing on your Alexa device. Search for "Ad Age" under "Skills" in the Alexa app. What people are talking about today: Leslie Moonves, CEO of CBS, held on to his job on Monday. And he'll "remain at the company, at least for now, as its board of directors investigates claims of sexual misconduct" against him, as Ad Age's Jeanine Poggi writes. After a board meeting Monday, CBS said it was selecting outside counsel to carry out an independent investigation following The New Yorker's report alleging that Moonves harassed six women over decades. But the board took no other action, though some directors had reportedly discussed whether Moonves should step aside. Moonves, CEO since 2006 and one of the U.S.' highest-paid CEOs, has said that while he might have made women uncomfortable at times decades ago, he has always known that "'no' means 'no.'"
Blowback: Not everyone approved of CBS's move to keep Moonves in his role during the probe. It's "a slap in the face to the brave women who came forward. Awful," tweeted Melissa Silverstein, founder of Women and Hollywood.

What CBS' Stephen Colbert said on TV about his boss: He cracked a few jokes (including one about how he hoped Moonves wasn't watching his show), then got serious talking about the #MeToo movement. "Everybody believes in accountability until it's their guy," he said. "And make no mistake, Les Moonves is my guy. He hired me to sit in this chair. He stood behind this show while we were finding our voice. He gave us the time and the resources to succeed. He has stood by us when people were mad at me. And I like working for him. But accountability is meaningless unless it's for everybody, whether it's for the leader of a network or the leader of the free world." Read more in The Daily Beast.

Queen Bey
Beyoncé will appear on the cover of Vogue in September, and she's reportedly getting extra-special treatment. Vogue's editor-in-chief, Anna Wintour, gave the star "unprecedented control," the HuffPost reports, and Beyoncé used it to hire 23-year-old Tyler Mitchell to shoot her photo. He'll be "the first black photographer to shoot a cover in the publication's 126-year history," HuffPost says. The report says the publication handed Beyoncé full control not only over the cover, but also of her photos inside the magazine and the captions, "which she has written herself." Despite it all, she is not giving Vogue an interview. Because Beyoncé almost never gives interviews. She's Beyoncé, and she calls the shots.
Also: Rumors are still swirling about Anna Wintour's future; HuffPost says this is likely to be her final Vogue September issue. Condé Nast has denied rumors of her departure.

Fun while it lasted
MoviePass, the probably-too-good-to-be-true $9.95 monthly movie theater subscription service, seems to be in its death throes. Many subscribers reported getting a blank screen on their app yesterday instead of a choice of movies to watch. Business Insider, meanwhile, says subscribers won't be able to use it to watch upcoming big summer releases. Last week, the company ran low on cash and had to get a loan of a few million dollars so people could keep using it. "If this isn't the end, then it's certainly near," TechCrunch writes. There are memes and snarky comments galore about all this. The Onion's headline Monday was: "Cash-Strapped MoviePass Limiting New Users To One Movie Filmed In CEO's Backyard Per Month."

Something to keep an eye on today
Procter & Gamble is the world's biggest ad spender, and when it speaks, the ad industry listens. P&G's quarterly results are out Tuesday; the company has already been slashing spending on marketing, so that's something to watch, as Ad Age's Jack Neff writes. To recap: "P&G has announced plans to cut an additional $450 million in marketing services through 2021 after $750 million in cuts the past three years," Neff writes. And also, as Neff writes, it's the first full quarter with activist investor Nelson Peltz on P&G's board. Read more here.

Perfectly imperfect: Etsy, the online marketplace known for handmade goods, is doing its first national TV commercial, writes Ad Age's Adrianne Pasquarelli. And all the designers featured in the spot are real Etsy sellers. The rather long tagline is "passionately made, for our perfectly imperfect, unboring lives." Watch it here.

Under pressure: Under Armour is losing another marketing exec. Adrienne Lofton, senior VP for global brand management since 2015, is leaving, Adrianne Pasquarelli reports in Ad Age. "Her departure follows the abrupt November exit of former chief marketing officer Andrew Donkin, who was with the company only 15 months."

Online misinformation: YouTube search results for some Hollywood celebs have been crowded out by a far-right conspiracy theory, NBCNews reports. So "when users searched for Tom Hanks on YouTube on Monday, the top five videos all accused Hanks of being a pedophile."

Painfully honest: John Oliver made a spoof of a Facebook ad, which you can watch here. Ad Age's Simon Dumenco applauds the "painfully honest" ad's tagline: "We own who you are."

Ad of the day: Coin collectors, take note. McDonald's is making a coin you can redeem to get a Big Mac in 50 countries. Jessica Wohl of Ad Age calls it "'a limited edition global currency'" that customers will get for free with the purchase of the signature burger.'" It's part of the Big Mac's 50th anniversary celebrations. Check it out here.