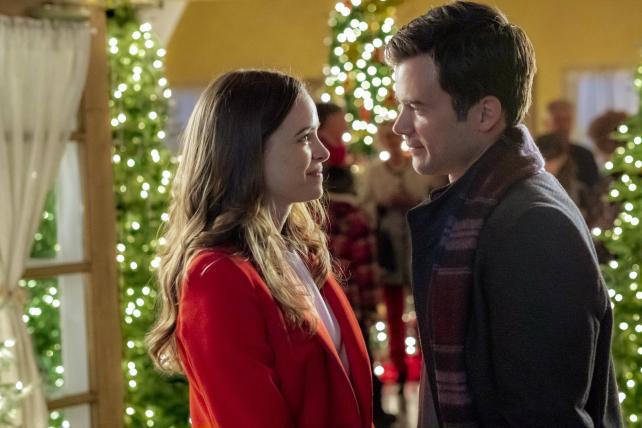 What people are talking about today
The Hallmark Channel is running 22 new Christmas movies this year, and there are another 15 on Hallmark Movies and Mysteries. Titles include "Mingle All the Way" and "Pride, Prejudice and Mistletoe." Some might say Hallmark rom-coms are the cinematic equivalent of holiday fruitcake: sweet, maybe a little stale. Others believe that "a steady routine of Hallmark Christmas movies is part of self-care, a bit like meditation," The Wall Street Journal writes. The Hollywood Reporter writes that premiere telecasts of the new Hallmark Christmas specials average audiences of over 4 million.
Good to know: Hallmark has a Countdown to Christmas Movie Checklist App to help you keep track of what to watch. There are a lot of plots to keep straight; between "A Majestic Christmas," "Homegrown Christmas" and "Welcome to Christmas," things can get confusing.

Streaming wars
Plans are shaping up for WarnerMedia's streaming service to compete with Netflix, expected to launch before the end of 2019. AT&T is eager to show the benefits of its pricey acquisition of Time Warner, rebranded as WarnerMedia. Variety reports that the streaming service will offer

"three options to subscribe, starting with an 'entry-level movie-focused package.' It will also feature 'a premium service with original programming and blockbuster movies' and a third option 'that bundles content from the first two plus an extensive library of WarnerMedia and licensed content.'"

It all sounds rather complicated. Someday soon, when the streaming wars heat up, we may find ourselves yearning for the simple days of yore when there was Netflix and not much else.

Wrangler vs. Ambercrombie
Cambridge Analytica, the now-shuttered political data firm that mined data from Facebook users, says it could guess your political leanings based on your engagement with fashion brands. Christopher Wylie, the whistleblower who exposed Cambridge Analytica's work, told a conference that fans of Abercrombie & Fitch "tended on average to be less cautious and more liberal, and individuals who liked Wrangler were usually more conservative and more keen on 'orderliness,'" Bloomberg News writes. Wylie, who spoke at a Business of Fashion conference in the UK, also said that people who engaged with Vogue magazine and Macy's also tended to be more liberal and outgoing. Cambridge Analytica worked on President Trump's 2016 election campaign. So in other words, as Quartz writes, "Cambridge Analytica weaponized Facebook users' fashion tastes to help elect Trump."

Nabbed
When it comes to ad fraud, for years "the bad guys would always get away," as Ad Age's George Slefo writes. This week, the U.S. Department of Justice announced that eight people had been indicted for running a major scheme; three of those have been apprehended overseas and are awaiting extradition to the U.S. Google and White Ops were among the companies who helped the FBI investigate. Slefo writes:

"Per Bjorke, senior product manager of ad traffic quality at Google, believes the biggest takeaway from the investigation was how many different companies came together to take down the operation. The ad tech ecosystem is complex, convoluted and different companies coming together for a single cause is not common. "The challenges and difficulties in industry collaborations is tremendous," Bjorke says, adding that "there is ongoing discussions behind the scenes with industry trade bodies about how we can collaborate and that has been going on for years; most of that has not been very public."

Just briefly:
Another one: "Digital publisher Mic Network Inc. has agreed to sell itself to women-focused publisher Bustle Digital Group for about $5 million … a fraction of Mic's valuation less than two years ago," The Wall Street Journal reports. Almost all of Mic's staff was reportedly laid off.

Bad ad: "Yahoo News is under fire for running an advertisement that includes the line 'Immigrants Endanger Us,'" BuzzFeed News reports.

Watch this space: "A prominent Google employee said today that workers had pledged more than $100,000 for a strike fund, an amount she would also match, following more news about the company's controversial plans for China," The Verge reports. The plan, it says, is to build a censored search engine.

Ooops: The U.S. Securities and Exchange Commission charged Floyd Mayweather and DJ Khaled for plugging ICOs on social media without disclosing that they were paid to promote them, CNBC reports.

Not happy: "An MDC Partners shareholder pushing for a board shakeup has gone public with its dissatisfaction with the holding company," Ad Age's Megan Graham writes. MDC agencies include Anomaly, 72andSunny and CP&B.

Next up: "Unilever turned to an insider with digital savvy as its next chief executive officer," Bloomberg News writes. The consumer goods giant named personal-care head Alan Jope to succeed Paul Polman.

Ad of the day: Apple has a surprisingly poetic new ad featuring Elvis impersonators. It's a promotion for iOS 12.1's Group FaceTime video chat feature. As I-Hsien Sherwood writes, the service helps the lonely crooners unite despite their far-flung locales – from an Asian apartment building to a ship at sea to the Siberian tundra. Watch it here.