Wednesday Wake-Up Call: Outrage over an ad at the Sydney Opera House. Plus, Taylor Swift at the AMAs 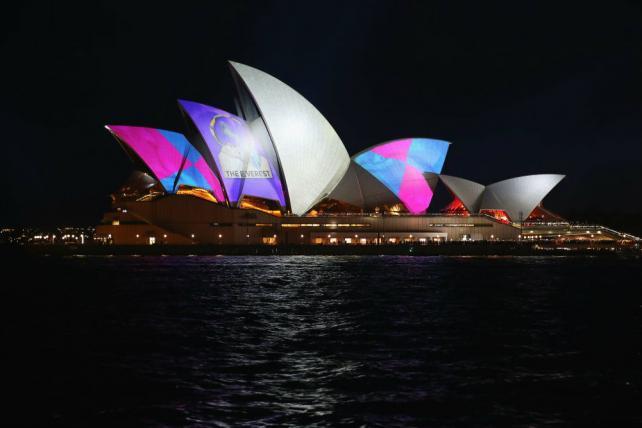 An ad for a horse race was projected onto the Sydney Opera House.
Credit: Wireimage/Don Arnold

Welcome to Ad Age's Wake-Up Call, our daily roundup of advertising, marketing, media and digital news. You can get an audio version of this briefing on your Alexa device. Search for "Ad Age" under "Skills" in the Alexa app. What people are talking about today: For 20 minutes, the iconic Sydney Opera House was transformed into a giant ad for a horse race. And a lot of people were unhappy about it. More than 1,000 people reportedly turned up to protest Tuesday as an ad for the Everest horse race was projected onto the building's sail-like roof. The Sydney Morning Herald reports:

"When the sails were lit up at 7.39 pm, the crowd let out an enormous boo and screamed 'shame on you,' 'our house not for sale' and 'turn it off' during the 20-minute illumination."

Protesters also tried to disrupt the ad by shining lights from flashlights and cell phones onto it. One protester held a sign reading, "Don't shit on art."

'Get out and vote'
Taylor Swift won four awards at the American Music Awards, including artist of the year. Accepting the honor, she noted that "this award and every single award given out tonight were voted on by the people. And you know what else is voted on by the people is the midterm elections on November 6. Get out and vote. I love you guys." An artist telling people to vote would usually be no big deal, but the usually apolitical Swift just used Instagram to endorse Democratic candidates in the Tennessee midterms and it seems to have had an impact. As CNBC reports, non-profit Vote.org says almost 65,000 Americans from ages 18 to 29 registered in the 24 hours after her post.
The AMAs ad strategy: Variety reports that ABC's broadcast of the ceremony made use of live-action six-second ads. Two Subaru commercials were "preceded by quick shots of talent at the Awards doing things that play into the themes of the ads," Variety says. One ad featured balloons in a car, linking to a scene of balloons getting delivered to a celebrity dressing room.

Notch-apalooza
Who decided that smartphone buyers want an unsightly notch cutting into the top of their screens? Plain old rectangles have a storied place in the history of things people like to gaze at – TV screens are rectangular, and so is the Mona Lisa. Anyway, there's a great big notch on the new Pixel 3 XL, which was among a few Google gadgets announced Tuesday at a splashy event in New York. Endgadget calls the notch an "eyesore," and adds that "Google's latest and greatest should look better, not worse, than what came out in 2017." In its attempt to compete with Apple and Samsung on hardware, Google also offered up a smaller Pixel 3 smartphone, a tablet-laptop blend and a speaker with a screen. The launch event offered a PR conundrum, since it came a day after Google acknowledged exposing user data from its Google+ social network. The Wall Street Journal says "Google addressed privacy concerns only tangentially at the event."
Also: Google is appealing the European Commission's nearly $5 billion fine for anti-trust issues. Read more in The Verge.

Win of the day
Intel's new global media agency of record is Dentsu Aegis Network's "Team Intel," made up of people from its shops, including Carat, Merkle and Amnet. The incumbent was Omnicom Group's OMD. As Ad Age's Megan Graham writes, Team Intel will "handle hundreds of campaigns across more than 20 countries, and the team will be located in regional hubs in Los Angeles, London, Singapore and Beijing." It's another win for Dentsu Aegis Network; LVMH chose the network to handle its North American media buying and planning. Dentsu Aegis also maintained its hold on Microsoft's global media agency business after a review.

Just briefly:
Empty pockets: A research report from MoffettNathanson says Snap "is quickly running out of money" and may need to raise capital by mid-2019, Bloomberg News says. The report pushed Snapchat shares down by over 6 percent Tuesday.

Done deal: "Comcast now owns more than 75 percent of Sky, with chairman James Murdoch, Chase Carey and others resigning from the board," The Hollywood Reporter says.

Sorry: An ad agency that publishes EgyptAir's in-flight magazine took the blame for a bizarre and insulting article on actress Drew Barrymore, the BBC reports. The introduction to the interview talked about Barrymore being "unstable in her relationships most of her life" and having had "several unsuccessful marriages." Amid questions over whether the interview was real, Ahram Advertising Agency blamed translation issues and apologized for any misunderstanding.

Fast-food blues: Some McDonald's franchise owners are discussing whether to form an advocacy group "to press McDonald's management to address their concerns that the burger giant's sales growth isn't keeping pace with the cost of remodeling restaurants," The Wall Street Journal reports. Meanwhile, Jack in the Box franchisees want the company to drop CEO Lenny Comma and reshape the top management team, including hiring a head of marketing, Bloomberg News reports.

Creativity pick of the day: At New York Comic Con, Audible offered visitors an immersion into the world of Harry Potter, and the experience paired audio clips of the books with a mystery-filled interactive exhibit. Ad Age's Megan Graham visited and talked to Audible SVP of content marketing and merchandising Sara Moscowitz; check out the video here.