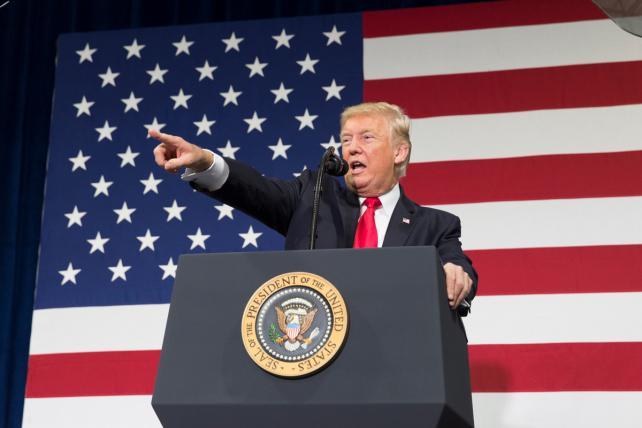 What people are talking about today: President Trump announced the winners of his fake news awards, or as he once referred to it, his honorifics for "the most corrupt & biased of the Mainstream Media." CNN was the big winner, with four awards; Trump is apparently still upset about the way CNN portrayed how he fed goldfish in Japan. That was No. 6 on the list.

There was no ceremony or pomp to the awards; Trump made the announcement via Twitter link. For about an hour, the link to the Republican National Committee website didn't work, and people saw a message asking them to try again later. NBC says all the traffic crashed the site.

The New York Times (winner of two awards) notes that Trump is in an odd position to be an arbiter of the truth; here's the opening of its article about the list.

"President Trump — who gleefully questioned President Barack Obama's birthplace for years without evidence, long insisted on the guilt of the Central Park Five despite exonerating proof and claimed that millions of illegal ballots cost him the popular vote in 2016 — wanted to have a word with the American public about accuracy in reporting."

To quote The New York Times' own ad campaign, "the truth is hard."

NFL ratings
Nielsen ratings for the NFL playoffs are down – a lot -- from last year. Ad Age's Anthony Crupi writes, "overall viewership for the (weekend's) four games fell 16 percent versus the year-ago average of 36 million viewers, and household ratings slipped 13 percent from a 19.5." The full story is more nuanced, though. Fox's ratings for the Saints-Vikings matchup on Sunday were terrific (and as Crupi writes, "it's near-certain that the game will stand as one of the top five most-watched broadcasts of 2018.") But that game was being compared with the thrilling Packers-Cowboys matchup of Jan. 15, 2017, which shattered records and was the most-watched broadcast in 2017 after Super Bowl LI.

Party time
Facebook started testing something it calls Watch Party. The Verge describes it as "a new feature available to groups that lets members watch videos at the same time while continuing to comment and interact." In a blog post, a Facebook exec says the company wants to promote "experiences that bring people closer together and inspire human connection instead of passive consumption." That's become a huge theme for Facebook lately, and some people have been wondering exactly how Facebook's embrace of "time well spent" squares with its move to get people passively viewing videos on its Watch platform. Is Watch Party a move to address that disconnect?

Think pink
Back in September, chocolate supplier Barry Callebaut announced that it had created a new kind of chocolate, after dark, milk and white – the company calls it "ruby chocolate," because it's made from Ruby cocoa beans. No color or flavoring is added. And while it's got ruby in the name, the chocolate itself is actually pink. Nestlé just became the first brand to commercialize it, putting it into KitKats in Japan. (Of course. Because Japan gets all the best KitKats – like those amazing ones that looked like sushi.) The product is also going on sale in South Korea, and Bloomberg News says Australia may be next. So what does it taste like? Bloomberg says it's got a "natural berry flavor that's sour yet sweet."
Related: ICYM, check out this in-depth story from Ad Age's Jessica Wohl about Hershey's new gold candy bar (which isn't actually chocolate.)

Just briefly:
Super Bowl: Don't forget that Ad Age has a newsletter dedicated to Super Bowl news. Sign up for it here. One update from the latest edition: "PepsiCo is bringing its Mtn Dew and Doritos brands together in back-to-back Super Bowl spots," with Morgan Freeman and Peter Dinklage starring, as Ad Age's E.J. Schultz reports.

Apple: Apple says it will pay a one-time tax of $38 billion on money made abroad and make a big investment in the United States; The Wall Street Journal says Apple is seeking "to emphasize its contributions to the American economy after years of taking criticism for outsourcing manufacturing to China."

Out: Don Nash, executive producer of NBC's "Today" show, is departing, CNN reports. Coming weeks after the Matt Lauer scandal, news of Nash's departure was "viewed by some people as a break with the past," CNN says.

NowThis: Social publisher NowThis is relaunching its own website, after closing it down to concentrate on social media, Business Insider reports. The publisher says the move was in the works months before Facebook's big News Feed changes.

Brexit: Facebook is expanding a UK investigation into whether Russia used the platform to try to influence the Brexit vote, Bloomberg News reports.

Headline of the day: From Fast Company: "Let the "Black Mirror" references fly: Britain has a Minister for Loneliness"