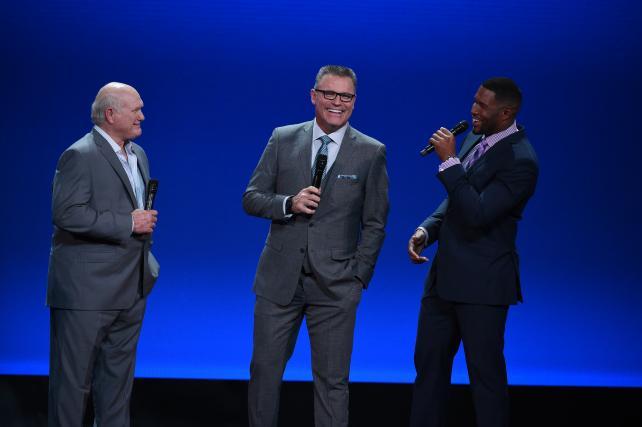 Welcome to Ad Age's Wake-Up Call, our daily roundup of advertising, marketing, media and digital news. What people are talking about today: Thank you, Seth Meyers, for telling it like it is at the NBC upfront. As Ad Age's Jeanine Poggi writes, Meyers joked that there are two kinds of development execs, "ones that develop new ideas and ones that rummage through the storage closet to see if we still have the Alf puppet." Also, "if you had a show in the 90s and your phone didn't ring this week," he said, "you must have been heartbroken."
The Fox and the Mouse: As TV networks woo ad buyers during the upfronts, the Fox broadcast network is casting itself as "New Fox" ahead of Disney's likely deal to buy away its sibling cable assets and production studios. Admittedly, "New Fox" has a better ring to it than "Fox, spun off after the Disney deal because the FCC says companies can only own one broadcast network, and Disney already has ABC." So what is the New Fox pitch? Well, a lot of sports. Poggi writes that ad buyers listening to the pitch were hammered over the head with the fact that Fox is airing "Thursday Night Football" in the fall.
Not so fresh: The Fox network's fall schedule is "light on fresh fare," with only a few new scripted series, as Anthony Crupi writes in Ad Age. One of Fox's new comedies is set in a retirement home; it's called "The Cool Kids." Here's a sample joke from the trailer: As the gang is riding in a car that's about to get pulled over by the police, one of the retirees says, "All right, everybody just relax. Act like we have Alzheimer's." Ba-dum ching.
Upfronts Downoad: "NBC stands for Nothing But Chicago," Seth Meyers quipped at that network's upfronts presentation from Radio City Music Hall, referring to the full night that the network will dedicate to three Dick Wolf series set in the city. Meyers also spoke about the departure of a beloved character from an NBC series: "I'm talking of course about This Is…'The Today Show'" he said. NBC spent less time showing off trailers to its upcoming series, though in the nearly two-and-a-half-hour presentation it still felt like there were plenty, Poggi writes in our special pop-up upfronts roundup. Get the Upfronts Download in your email this week only by signing up for the Media Buzz email right here—Poggi is taking it over for the upfronts.

Gone in six seconds
Snapchat just got a little more like … old-school TV. As Ad Age's Garett Sloane writes, it just debuted six-second ads that can't be skipped. Before, viewing Snapchat ads was voluntary. "The new ads appear like commercials in the middle of a show, similar to TV, a medium Snapchat has tried to emulate but update for the mobile age," Sloane writes. It's what advertisers wanted, though users might be annoyed, especially given all the backlash against Snapchat tinkering with its design. As someone tweeted, "why are they actively trying to make me not use their app? What's next? I have to solve a riddle to open a snap?"
Also: "Snapchat has once again updated its look, hoping to win back users who hated an ad-friendly redesign from earlier this year," Sloane writes.

Amazonian retargeting
Amazon is testing a new display ad that will "follow shoppers around the web to lure the consumers back to Amazon to buy," Bloomberg News reports, adding that the company will invite some merchants to test out the function this month. That means Amazon is getting on the turf of Google and Criteo; Criteo shares promptly dropped 7 percent on the news. It's another reminder that Amazon is serious about making more money from advertising. And consider this little factoid: Chinese e-commerce giant Alibaba makes a huge amount from advertising already—reportedly more than half its revenue.

Memo to WPP
The Financial Times reported that Tim Armstrong, CEO of Verizon's Oath, was among the candidates being considered as a possible replacement for Martin Sorrell at WPP. But on Twitter, Armstrong suggested he wasn't interested, tweeting that he's "totally focused & engaged" in his current role, as The Drum writes. Armstrong concluded his tweet: "#nofakenews."
Also, ICYMI: WPP Chairman Roberto Quarta "faces a shareholder revolt" over the murky circumstances of Sorrell's departure, as advisory group Glass Lewis recommends against investors re-electing Quarta. Read more in The Guardian.

Just briefly:
Actually: Time's Up/Advertising apologized for saying its first meetings would be open only to women working at ad agencies; it later said freelancers and those between jobs were welcome at the meetings convened in 14 cities Monday, as Ad Age's Megan Graham writes in her report on what ultimately went down.

ESPN's private pitch: Ad Age's Anthony Crupi apparently spent a fair amount of time trying to get ESPN talent and former NFL coach Rex Ryan to swear, and finally it worked. Also, ESPN made its case to IPG's Magna ahead of its upfronts presentation today. Get the, uh, colorful pre-game report here.

Note to creatives: If you're thinking of going client-side, read Ann-Christine Diaz's story in Ad Age first. There are great opportunities now for creatives to work inside brands, but, as Diaz notes, it's different. You might not be as coddled as at an agency. And there's a whole lot of work.

Dentsu: Dentsu Group, owner of agencies including Isobar, iProspect and 360i, reported organic growth up 2.1 percent in the first quarter. And now it gets 60 percent of revenues outside its home market of Japan. "We have transformed into a truly global competitor," CEO Toshihiro Yamamoto says in a statement.

ICYM the really big news of yesterday: CBS Corp. sued its majority owner, National Amusements, to try to "block an unwanted merger with Viacom Inc. and wrest control of CBS away from Sumner Redstone and his heirs," Bloomberg News reports. And by the way, the CBS upfront is tomorrow.

Wild card: "The U.S. Supreme Court struck down the federal law that bars gambling on individual sporting events in most of the country," Bloomberg News reports.

Ad of the day: Before she was pop culture royalty, Queen Latifah was a Girl Scout. As Ad Age's Adrianne Pasquarelli writes, Queen Latifah narrates the group's new ad ticking off former scouts, from athlete Venus Williams to actress Dakota Fanning to YouTube CEO Susan Wojcicki. Lest you think this is the Girl Scouts' response to the Boy Scouts' recruiting girls now, the group says it was in the works well before that happened. Even so, the spot offers a pretty good argument against joining the boys. Watch it here.