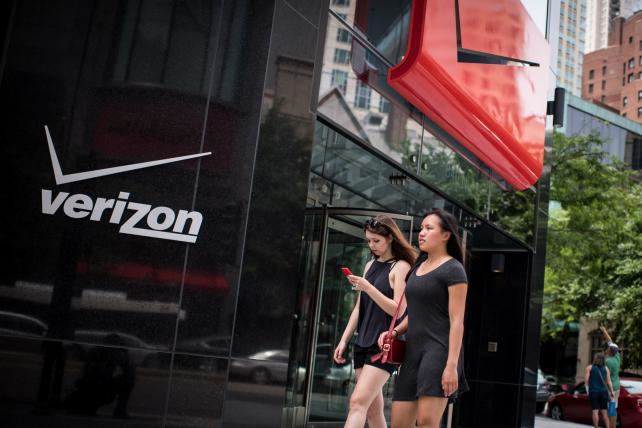 A Verizon store in Chicago in 2016
Credit:

What people are talking about today
Verizon is killing off the Oath brand name. As of Jan. 8, the new name for the business unit containing Yahoo and AOL will be Verizon Media Group. It's a perfectly sensible name, if bland, and the name "Oath" always felt weird and pointless during the brief period it was in use. But Verizon's announcement caused some bafflement because the company illustrated the press release about Verizon Media Group with a confusing logo, a "Y" in a purple box. Was that a "Y" ... for Verizon Media Group? Or an accidental use of the Yahoo insignia? Business Insider writes that "the Y logo appears to have been a gaffe that immersed the rebranding effort in confusion." And people are making a lot of jokes about it on Twitter. Like, "Y tho?" and "Y indeed?"

#WeCanDoIt
It's been about a year since CEO Kristen Cavallo and CCO Karen Costello have been running The Martin Agency, which was shaken by a #MeToo scandal. Refinery29 takes a look at what happened after the scandal died down, now that "two women have effectively taken over what was once a male-dominated company in a male-dominated industry." Refinery29 writes that under Cavallo's leadership,

"they've grown the number of women on the nine-person executive committee to four, done an internal audit of salaries and corrected the wage gap, and added six weeks of paid paternity leave to the benefits package. They've also begun to re-shape the staff itself: 34% of new hires this year are people of color."

Fake it 'til you make it
Some of the supposed sponsored content you're seeing on Instagram might be fake: It could be the work of wannabe "influencers" pretending they've got sponsorship deals with brands, according to The Atlantic's fascinating new look at the out-of-control influencer culture of 2018. Some people are doing it to try to attract bona-fide brand deals, while others just think it makes them look cool. The Atlantic quotes one woman who took things to the next level during a trip to Miami:

"Technically, she was just there on vacation, paying her own way for everything, but on Instagram she positioned it as an exclusive press trip. 'I took a lot of pics at restaurants and posted 'Thanks so much XYZ restaurant for the hospitality!''' she said … 'The hope is that it's perceived in a way that looks like there's a reason you're in a different city and state, not just enjoying a weekend vacation.'"

It's a commentary on the strange, appearances-obsessed online culture of 2018. It's also a reminder for brands: If you're hiring "influencers," make sure they've got actual influence.

Just briefly:
More bad news for Facebook: "Internal documents show that the social network gave Microsoft, Amazon, Spotify and others far greater access to people's data than it has disclosed," The New York Times reports. Netflix and Spotify, for example, had the ability to read Facebook users' private messages, The Times says.

Riddles and rhymes: A jokey rhyme in a holiday greeting from NBCUniversal's boss has people wondering: Is the company at work on a Netflix-like streaming service? Read more from Bloomberg News, which says "it's hard to know how seriously to take a message written in the rhyming style of Dr. Seuss."

Huh: Some media partners are pulling back from Snapchat. But the NFL has reinforced its Snapchat strategy and doubled the audience for highlights of its Sunday games, Ad Age's Garett Sloane writes.

Copycat?: Williams-Sonoma filed a lawsuit accusing Amazon of selling pieces of furniture that are "strikingly similar" to ones from its own West Elm brand, Bloomberg News reports.

Hacked: Fans of controversial YouTuber PewDiePie hacked The Wall Street Journal, The Verge reports: "A sponsored post on the Journal's affiliated site was edited to say that the publication would 'like to apologize to pewdiepie'" for negative coverage about him ...

Super Bowl news: M&M's is returning to the Super Bowl with a 30-second spot produced by BBDO New York, Ad Age's Jeanine Poggi and Jessica Wohl write. Danny DeVito starred in last year's spot (in which he played a humanoid M&M who for some reason gets hit by a truck).

'Being Badass': Bozoma Saint John, CMO of the global media conglomerate Endeavor, "will host and produce the upcoming documentary series 'Bozoma: Being Badass' on the Starz network," Fast Company reports.

Ad of the day: Penny Marshall, who directed "Big" and "A League of Their Own" and co-starred in "Laverne & Shirley," has died at age 75. One of her early breaks came from a Head & Shoulders ad. Rolling Stone says "the ad's main selling point is meant to be the luxurious blonde mane of Marshall's co-star, Farrah Fawcett. But there's something in the dry exasperation with which Marshall responds to Fawcett's relaxed and bubbly energy that makes the whole idea land." Watch it here.