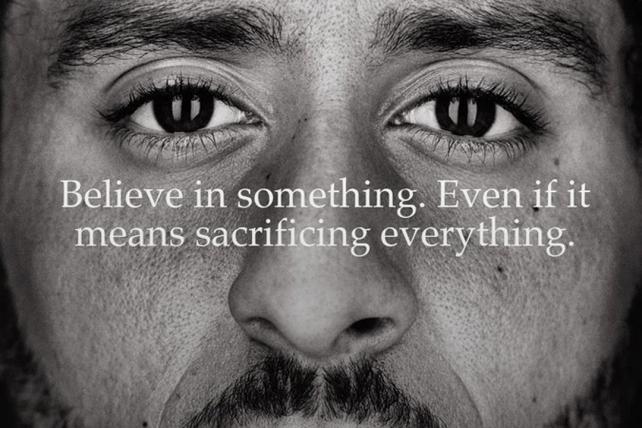 Welcome to Ad Age's Wake-Up Call, our daily roundup of advertising, marketing, media and digital news. You can get an audio version of this briefing on your Alexa device. Search for "Ad Age" under "Skills" in the Alexa app. What people are talking about today: Nike just took a strong stand on the NFL anthem protests by making a "Just Do It" ad starring the player who's the face of the movement. As Ad Age's E.J. Schultz writes:

"Colin Kaepernick—who began sitting out the anthem in 2016 as a way to protest social inequalities—stars in a new ad Nike released on Monday via Kaepernick's Twitter handle. The tweet shows the former San Francisco 49er staring straight ahead with the following copy beneath his eyes: 'Believe in something. Even if it means sacrificing everything.'"

Nike says the ad is part of a larger Wieden & Kennedy campaign marking the 30th anniversary of the "Just Do It" tagline; other athletes also appear.
Kaepernick, a former San Francisco 49ers quarterback, began his protest in 2016, and others joined in; he entered free agency in 2017 and has not played since, as Schultz writes. Kaepernick is doing legal battle with the league; he says teams colluded to punish him for his role in the protests by shutting him out (that's what Nike is apparently referencing with the phrase "sacrificing everything.")
Nike is siding against those who think the protesters disrespect the national anthem and what it stands for, including President Trump ("Stand proudly for your National Anthem or be Suspended Without Pay!"). Some people are already pledging to boycott the brand. This was a notable corporate stance for other reasons too. Nike supplies all the NFL's on-field apparel, a deal that was reportedly renewed in March through 2028; that means all NFL players wear the Nike swoosh. The NFL is under intense scrutiny about how it handles the protests. What's it going to say about Nike's Kaepernick ad?
'Purposeful controversy': Clemenger BBDO's Luca Vergano noted that Nike is going to the heart of the debate instead of shunning it. "Purposeful controversy can build a brand," he wrote on Twitter.
Another take: Sports journalist Jemele Hill tweeted, "I'm just here to remind folks that last year Colin Kaepernick was in the top 50 in NFL jersey sales, despite not being on a roster. Nike made a business move."

A tough second day on the job
The world's biggest ad giant has a new CEO, four and a half months after WPP founder Martin Sorrell's abrupt exit. As expected, it's Mark Read, a longtime WPP exec. Already Tuesday, his second day on the job, Read faced a challenge: The company's earnings report and outlook disappointed investors, and shares dropped up to 8.6 percent, Bloomberg News writes. Shares in the company have declined 16 percent in the past year, Bloomberg says.
Here's a few things to know about Read, from Megan Graham's Ad Age coverage:
1. Though he's a WPP insider who has spent much of his career there, he "isn't your typical agency guy," says Lisa Colantuono, president of AAR Partners, a search consultancy. "His background in consulting and as an ad-tech entrepreneur will be vital to his new role and for the injection of 'digital vitamins' WPP needs."
2. He will oversee 130,000 people around the world, at agencies including Ogilvy, Y&R, GroupM and Wunderman, the agency where he was formerly global CEO.
3. The new WPP CEO will be making a much more modest salary than Sorrell, who had famously fat paychecks. As Graham writes, WPP's statement says:

Never mind
The New Yorker invited former Trump White House chief strategist Steve Bannon to its upcoming festival, where he was supposed to be interviewed onstage. Editor David Remnick promised to ask tough questions. But hours later the festival disinvited him, after an outcry from A-list stars also taking part. As The Wall Street Journal writes, "actor Jim Carrey, comedy producer Judd Apatow and comedian John Mulaney all backed out, citing Mr. Bannon's participation as the primary reason."
Carrey tweeted, "Bannon? And me? On the same program? Could never happen." Jimmy Fallon also retweeted an article about Bannon headlining the event, with the comment, "I'm out."
The New Yorker's Remnick crafted a long statement about the decision to disinvite Bannon from the October event, writing "I've changed my mind. There is a better way to do this." The better way, he says, is a more traditional journalistic interview, if the opportunity arises.
Bannon's reaction: "In what I would call a defining moment, David Remnick showed he was gutless when confronted by the howling online mob," he said, as quoted by The AP.
The sponsor POV: Apparently, sponsors weren't a factor in rescinding the invite. "The magazine isn't aware of any sponsors withdrawing their support," The Journal wrote, citing a person with knowledge of the festival. The event's sponsor page lists Hennessey, Land Rover, The Nature Conservancy and WordPress.com.

Just briefly:
'Huge': Amazon is reportedly at work on an ad-supported video service for its Amazon Fire TV streaming device. There are lots of hurdles, but as Ad Age's George Slefo writes, the upside is "huge." For example, the service "should be able to to tell whether a person who saw an ad for a given product actually ordered the product within a set period of time."

Amazon in Hindi: Amazon just made its India website and apps available in Hindi, India's most popular language, The New York Times writes. That could help "deflect the political pressure coming from New Delhi, where policymakers are considering ways to curb the power of foreign internet companies," The Times says.

On ice: "The next James Bond movie hasn't started filming and the originally planned November 2019 release date is in doubt after director Danny Boyle abruptly quit, according to Hollywood media reports. But Heineken has already shot its next ad featuring Bond actor Daniel Craig—it just won't run for a while," Ad Age's E.J. Schultz writes.

'So Elle': Elle magazine wants people to start using its name as an adjective. As in, that's "so Elle." That's the magazine's new tagline, in time for New York Fashion Week. Read more by Ad Age's Simon Dumenco.

Creativity pick of the day: Car manufacturer Skoda is willing to acknowledge that its vehicles used to be unsightly. But "we weren't the only ugly ones in the '90s," its new ad says. The spot by Paris agency Rosapark is amusingly illustrated by some bad '90s looks. "Fanny packs, platform shoes, tie-dye and so much gel parade by in cringey scenes from bygone days," Ad Age's I-Hsien Sherwood writes. (Did we really look that bad in the '90s? Probably. Raise your hand if you wore a crystal pendant.)

Also: Bozoma Saint John, chief marketing officer at Endeavor, has joined the list of speakers at Ad Age Next in New York City on Nov. 13 and 14. Read more here.