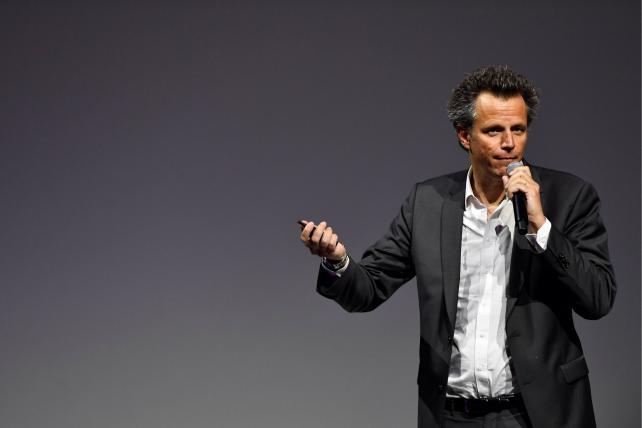 Welcome to Ad Age's Wake-Up Call, our daily roundup of advertising, marketing, media and digital news. You can get an audio version of this briefing on your Alexa device. Search for "Ad Age" under "Skills" in the Alexa app. What people are talking about today: Publicis Group just became the second agency company this week to report disappointing financial results. Publicis said organic revenue in the second quarter fell 2.1 percent to $2.56 billion, and it put much of the blame on its health sales representatives business in the U.S. The drop in revenue was a surprise: Analysts had expected growth of 1.1 percent, Bloomberg News says. "I reiterate, if necessary, that our market has been facing major challenges and transformation has become a necessity for all," CEO Arthur Sadoun said in a statement.
How will investors react to the news from the third-biggest global agency group by revenue? Already this week, Omnicom Group reported organic revenue growth of 2 percent, which was below expectations; its stock price dropped about 9.5 percent in a day. More generally, there are questions about big agency companies and the course they should chart in the age of Google and Facebook, at a time of competition from consultancies and pressure from budget-conscious clients. The Publicis Groupe share price is something to keep an eye on today.

It's not me, it's you
Papa John's signed on another agency to handle creative work following its bizarre break-up with Laundry Service, it turns out: Minneapolis-based Fallon, as Ad Age's Jessica Wohl and Megan Graham write. But now Fallon is ending that brief relationship amid all the controversy.
The said controversy is a bizarre tale with many chapters, which is why we keep writing about it. Papa John's founder John Schnatter used a racial slur in a media-training call with a previous agency, Laundry Service. That detail appeared in a news report, and Schnatter stepped down as chairman. But then he accused Laundry Service of having tried to extort the company for $6 million to keep quiet about what he said, a claim that Laundry Service says is "completely false."
Fallon says it learned about the incident involving Laundry Service when everyone else did. "During our short time with Papa John's, Fallon produced limited product-focused advertising that has yet to air," the shop said in a statement to Ad Age. "The agency has decided not to pursue additional business with Papa John's."
Papa Wendy's?: The Wall Street Journal writes that Schnatter, before his departure, had preliminary talks with Wendy's about a possible merger. The Journal also reminds us that Schnatter still has a 29 percent stake in the company, and he's still on the board. Since the company is taking him off its marketing materials and evicting him from its headquarters, this is quite a messy situation.

Small agencies win
Marin County, California-based BSSP is Ad Age's Small Agency of the Year for 2018. It recently landed Mitsubishi, and "it stood out for creative that worked." Read more here about which shops were honored at the Ad Age Small Agency Conference in Marina del Rey, California.
More on small agencies: At the Ad Age conference, agency boss Ahmad Islam offered words of caution for anyone thinking of selling their ad agency, as Ad Age's Bradley Johnson writes. "It's all heart emojis up until the day the deal closes. Then it gets weird," Islam said.

Billions
The European Union handed Google a $5 billion antitrust fine, but the money isn't as big a deal as one might think. As Bloomberg News points out, the fine is equivalent to the revenue Google makes every 16 days. "Investors and analysts largely shrugged off the ruling's potential to immediately dent Google's business," Bloomberg notes. The European Commission says Google put illegal restrictions on the manufacturers of Android devices, "to cement its dominant position in general internet search," which is what allows it to suck up so much ad spending. It accuses Google, for example, of paying "manufacturers and network operators to make sure that only the Google search app was pre-installed." More important than the fine, the EU says Google has 90 days to stop such practices, which it calls "illegal." Google plans to appeal.
Meanwhile, across the pond: U.S. regulators are paying attention. "We're going to read what the EU put out very closely," said FTC Chairman Joseph Simons. Read more via Bloomberg.

are now offering marketers the ability to make targeted ad buys based on offline data, in similar fashion to other popular social media platforms. A marketer can use Nielsen audience data, for instance, to target someone on Snapchat who purchased lipstick at a retail store offline.

One interesting point: Josh von Scheiner, founder and creative director at social media agency VonShine Industries, told Slefo that "Facebook is scaling back on purchase-based targeting while Snapchat is scaling up, something that should help it grab more ad dollars."

Just briefly:
Facebook gets flak: Facebook's Mark Zuckerberg is getting criticized for comments he made to Recode about Holocaust denial on its platform. "At the end of the day, I don't believe that our platform should take that down because I think there are things that different people get wrong," he said. "I don't think that they're intentionally getting it wrong." The backlash was swift: The Anti-Defamation League's CEO Jonathan Greenblatt tweeted that when it comes to Holocaust denial, "Facebook has a moral and ethical obligation not to allow its dissemination." Zuckerberg clarified his comments, saying he finds such views "deeply offensive."

More on Facebook: "A fiery left-wing Facebook page has disappeared from the social network one day after Republicans in Congress pressured the company about its content, but Facebook says it didn't shut it down," writes Garett Sloane in Ad Age. The oddly-named page is called Milkshakes Against the Republican Party.

Changes: Discovery is reorganizing its ad sales team after its merger with Scripps Network, Ad Age's Jeanine Poggi writes. It's prioritizing 12 networks including HGTV, Animal Planet and Motor Trends Network, leaving channels such as Discovery Family, Discovery Life and Great American Country outside its top focus. "Amid the sales reorg, the company is laying off more than 20 staffers in its ad sales division this week, according to people familiar with the situation," Poggi reports.

Slowing down the internet: Ad Age's Simon Dumenco checks out what Condé Nast's Bon Appétit learned in the year since it launched a digital food brand for millennials. It's called Basically, and it's for people who love to eat, but who don't necessarily know how to cook. From a design standpoint, "We kind of tried to slow down the internet a little bit and show you one thing at a time," says Digital General Manager Eric Gillin. "Giving it room to breathe. And it's worked."

Ad of the day: An unusual new commercial showing in theatres conveys the message that whatever kind of content you like, AT&T can deliver. One ad, showing in theatres, starts out as "a rom-com spoof about a couple who kiss and make up in dramatic fashion, only for darkness to fall and the girlfriend to transform into a zombie," Ad Age's Ann-Christine Diaz writes. (T-Mobile USA CEO John Legere retweeted the story with a snarky comment about his competitor: "Hmm… a promise of love and it turns into a nightmare? Sounds like @ATT.")

Stunt of the day: "If you go down to London's Tower Bridge this week, you'll find a giant statue of Jeff Goldblum lounging by the river, shirt half open and in definite 'come hither' pose," writes Ad Age's Alexandra Jardine. The statue marks 25 years of the "Jurassic Park" franchise, and it was set up by streaming service Now TV. It's quite something; you can see a photo here.