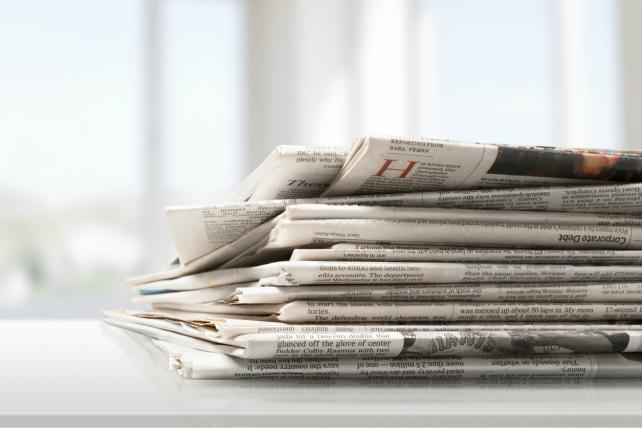 Welcome to Ad Age's Wake-Up Call, our daily roundup of advertising, marketing, media and digital news. You can get an audio version of this briefing on your Alexa device. Search for "Ad Age" under "Skills" in the Alexa app. What people are talking about today: The name Tronc – one of the weirdest corporate rebrands in memory – might be on its way out. The owner of the Chicago Tribune and New York Daily News is set to change its name back to Tribune Publishing, according to a report in The New York Post, which gets extra credit for its headline, "Tronc finally realizes it has a stupid name." Bloomberg News, meanwhile, says the company is thinking about dropping the name but hasn't made a decision yet.
The 2016 debut of the name Tronc (shorthand for Tribune Online Content) spawned a gazillion jokes. Like: "What you gonna do with all that jonc / All that jonc inside your tronc." And also: "Go home, Tribune. You're Tronc."
The Post quoted a source saying the board approved the name change a month ago, but was waiting for the finalization of the sale of the Los Angeles Times and other papers to biotech billionaire Patrick Soon-Shiong, which happened yesterday. Soon-Shiong, who is still a Tronc shareholder, also reportedly thinks the Tronc name is "silly."
If Tronc's name goes, how will the moniker be remembered? One Twitter user suggested it could enter the vernacular: "tronc' will live on as a word for a bad idea that had to be reversed, like New Coke." Sounds like a plan.
Also: As the Los Angeles Times turns the page on Tronc, it's got a new editor: Norman Pearlstine, 75, who has led Time Inc., Bloomberg and The Wall Street Journal. Read more here.

Bons mots
Ad Age editor Brian Braiker caught up with John Hegarty at the Cannes Lions, and the Q&A is worth your time. The Bartle Bogle Hegarty co-founder is refreshingly free with his opinions. He's not a fan of "Fearless Girl" (because "''Fearless Girl' did what for the brand?"). He says former WPP CEO Martin Sorrell "looks like somebody who's trying to have revenge and as we know that's a dish best eaten cold." Here's something he said about Cannes Lions:
Q: Have you seen any of the work this year at the Palais?
A: No I just got here but most of it is scam anyway so I can't be asked.
Q: What do you mean by that?
A: Most of the print work is scam, you can tell it, you can see it a mile away.
Q: Meaning it's work just created to win awards?
A: Yeah. I didn't come here to look at somebody's portfolio ...
Oh, and Hegarty will make you consider the story of Jesus' birth from a new angle, too. Check out the full interview here.
Also: The Ad Age team at the Cannes Lions International Festival of Creativity has a daily live blog and an evening newsletter called Cannes Nightcap, ICYMI.

AT&T and the future of ads
After AT&T's purchase of Time Warner (which is now called WarnerMedia), what's next? For one, the company wants to make TV commercials work more like digital ads, and to test ways to cut down on commercial clutter, writes Ad Age's Jeanine Poggi. At the Cannes Lions, Brian Lesser, who runs AT&T's new advertising and analytics unit, offers this: "Because we have DirecTV, we are the only company that knows you are watching a big screen in your living room wall and you have a small screen in your pocket." As Poggi writes,

"With this knowledge, AT&T can then have an icon appear on the TV screen during a show that indicates there's a mixed-reality experience on your phone. And without ever interrupting the content, consumers would be able to receive a targeted commercial message on their phone."

Will consumers be creeped out knowing their phones are in cahoots with their TVs? And actually, is that any creepier than ads that follow you around the internet?

Just briefly:
Blockchain: "IBM iX is joining with Mediaocean to pilot a blockchain network for media deals involving Unilever, Kimberly-Clark Corp., Pfizer, Kellogg and its IBM's own Watson," writes Ad Age's Jack Neff. Goals include improving transparency and fighting fraud. The plan is set to be announced Tuesday in Cannes (where else?).

Lions: The Cannes Lions started handing out awards, and the Health Grand Prix for Good went to a campaign called "Blink to speak." It's an "eye language" that lets patients with paralysis communicate their needs (like when they need to see a doctor) and feelings ("I love you.") As Ad Ad Age's Nat Ives writes, it was created by TBWA/India for the NeuroGen Brain & Spine Institute and the nonprofit Asha Ek Hope Foundation. Read more here.

Katie Couric and Queen Latifah: P&G is setting a goal of having women direct at least half its product commercials by 2023, Bloomberg News reports. The world's biggest advertiser has also teamed up with Katie Couric on a web series in partnership with theSkimm, and it's also set to work with Queen Latifah's Queen Collective.

Rekognition: About 20 groups of Amazon shareholders are asking the company to stop selling its facial recognition tech, Rekognition, to law enforcement. Read about it on CNN.

ASMR crackdown: China is cracking down on ASMR videos (those videos where people whisper and tap and scratch things, sounds that make some viewers experience a tingly feeling of contentment.) As Fast Company says, "Not surprisingly, some ASMR videos venture over into the sensual/sexual side of things, and that's where Chinese officials have become concerned."

Moving up: Ahead of Rolling Stone's relaunch next month, managing editor Jason Fine has been promoted to editor, Variety reports.

Job opening: Next month, "Walmart U.S. Chief Marketing Officer Tony Rogers is moving over to sibling Sam's Club in the newly created role of chief member officer," Ad Age's Jack Neff writes. That means the job of Walmart CMO is up for grabs.

Cereal box marketing 2.0: Kellogg's is selling limited-edition boxes of Frosted Flakes cereal and Keebler Fudge Stripes cookies with a "Jurassic World: Fallen Kingdom" theme. Ad Age's Jessica Wohl writes that every box comes with a screen inside that plays more than five minutes of content. They sell for $24.99.

Stunt of the day: Summer's here, and there's plenty of serious creativity on display at Cannes, so let's end with some silliness. Oscar Mayer already has a WeinerDrone, WeinerCycle, Weinermobile Mini and Weiner Rover, and as Ad Age's Megan Mowery writes, now it also has something it calls a "Super Hotdogger." It's a super hero-esque guy who travels by jetpack, carrying hotdogs. And as Mowery writes, he just few over New York's East River. Read all about it here.