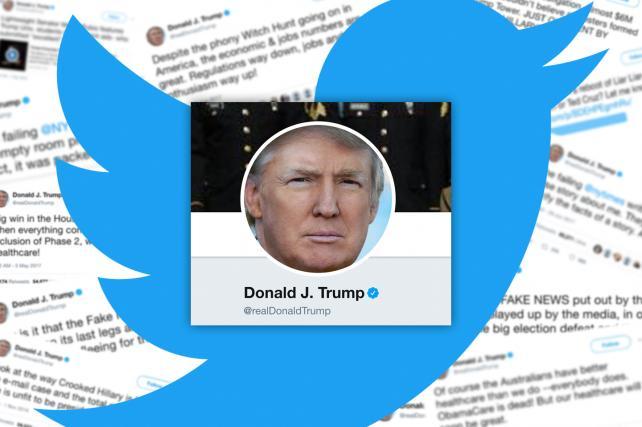 Welcome to Ad Age's Wake-Up Call, our daily roundup of advertising, marketing, media and digital news. You can get an audio version of this briefing on your Alexa device. Search for "Ad Age" under "Skills" in the Alexa app. What people are talking about today: President Trump sent a zinger on Twitter at 5:24 a.m. yesterday accusing Google news search results of being rigged against conservatives, himself in particular. People who search Google for "Trump News" get results that are "RIGGED, for me & others, so that almost all stories & news is BAD," he wrote, indulging in his pre-dawn Twitter habit. Again. ("Tweets, lies and threats. It's morning in America," writes Ad Age's Roberta Bernstein.)
Google retorted that its searches weren't politically biased. Meanwhile, Trump widened his target. "I think that Google, and Twitter and Facebook, they are really treading on very, very troubled territory and they have to be careful," he said, as quoted by Reuters. "It's not fair to large portions of the population." Trump's top economic adviser said the administration is "taking a look" at possible Google regulation, a remark that raised concerns about free speech. One question: Was the administration already looking at that before Trump's 5:24 a.m. tweet? Or was this a spur-of-the-moment, go-with-the-flow thing?
Notable reactions: Wired editor Nicholas Thompson commented on Trump's use of the words "Trump News." "By tweeting the specific search term, which will then get written about in a million news stories, he's going to change what the algorithm shows. Simpler than regulation!" he wrote.
Fox News' Shepard Smith, about Trump's comments that tech giants are on troubled territory: "What is, what is he talking about?"

Accuracy in advertising
This month, the U.S. Food & Drug Administration approved the first birth control app that can be marketed as contraception. It's called Natural Cycles, it doesn't use hormones, and it asks women to take their temperature first thing in the morning to calculate their period of fertility. (Basically, this is a longstanding technique dressed up in a high-tech package.) In the U.K., meanwhile, the app just got a scolding from the Advertising Standards Agency, which took issue with the company's ad marketing itself as a "highly accurate" means of birth control. The Guardian reports that the ASA "began investigating the advert after it received five complaints about the app. Now the ASA has banned it, saying it was misleading and exaggerated the app's effectiveness."
Natural Cycles said it respects the outcome of the investigation, and said that it applied to "one Facebook advertisement, which ran for approximately four weeks in mid-2017," and that it was pulled after the company learned about the complaint. Which doesn't reveal much about how many people saw the ad.

'Believe in Dreams'
Struggling legacy retail brands take note: Tiffany & Co. has found a formula that's working. "Tiffany & Co. is regaining its luster following successful marketing campaigns, new products and fancy customization programs," writes Ad Age's Adrianne Pasquarelli. Net sales jumped 12 percent in the second quarter compared to the year-earlier period, and the company will boost marketing spend for the second half of the year. Pasquarelli writes that "Tiffany has been attracting consumers with its diverse 'Believe' campaigns, [including] 'Believe in Love,' which debuted last year and featured interracial and same-sex couples, and 'Believe in Dreams,' with younger celebrities such as Elle Fanning and Maddie Ziegler."
The brand's New York café has been a hit too, after inspiring dozens of headlines along the these lines: "You can literally have breakfast at Tiffany's."

Just briefly:
Summer's over?: "Pumpkin spice latte season is officially upon us, even though in most of the US it's not exactly sweater weather," Quartz writes. The beverage went on sale yesterday at Starbucks, and reactions on Twitter to the chain calling it quits on summer have been mixed, to say the least.

Vroom: IndyCar execs are "relying on NBC's relationships with advertisers to help it land a new title sponsor," writes Ad Age's E.J. Schultz. Sponsor Verizon is not returning after this season.

Bye-bye?: Bob Costas is in talks to leave NBC, USA Today reports. The 66-year-old sportscaster has been with the network since 1979.

Tomatometer: Rotten Tomatoes, the online review aggregator, "is expanding its male-dominated critics base in order to be more inclusive and foster diversity," The Hollywood Reporter writes.

More on bias and big tech: The New York Times reports that more than 100 Facebook employees have teamed up against what they see as an intolerant liberal monoculture at the company. "The activity is a rare sign of organized dissent within Facebook over the company's largely liberal workplace culture," The Times writes.

Ads of the day: In a new campaign from Buffalo Wild Wings, guys will do anything to escape the boredom of their everyday lives to watch some football (and eat some wings, of course). One humorous spot shows a white-collar worker escaping from a team-building exercise by breaking a hole in the ceiling tile. Ad Age's Jessica Wohl writes that "the campaign carries some big expectations. It's the first football season since Arby's paid $2.9 billion for Buffalo Wild Wings in February." The spots are from Figliulo & Partners; check them out here.