Walmart Makes Too Much of an 'Impact', Beefs Up Assortment | Ad Age
Skip to main content

Walmart Makes Too Much of an 'Impact', Beefs Up Assortment

NEW YORK (AdAge.com) -- There's a legend circulating around Bentonville: Walmart Chairman Lee Scott enters a Friday morning senior-management meeting with two bags of groceries from Harps, the Arkansas retail chain that has somehow survived the dominance of its much bigger hometown rival.

The bags, the story goes, were filled with items Mr. Scott's wife had purchased that week because she couldn't find them at Walmart. The implication: The chain's assortment cutbacks under so-called Project Impact to declutter aisles and make the shopping experience more upscale had gone too far.

Spokesman David Tovar said he could find no evidence of "anything quite so dramatic" happening at a senior-management meeting and said the story may have gained some details in the retelling. But he did acknowledge that assortment issues have been a management concern for the past nine months. 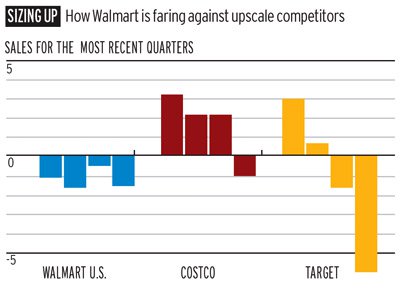 And with two principal architects of Project Impact either heading to a new role at the retailer or set to leave the company by next month, several people close to the retail behemoth believe much of the merchandising and marketing programs they led -- which caused much consternation among suppliers -- might be on the way out, too.

Walmart Stores has made it clear that both Vice Chairman Eduardo Castro-Wright and Chief Merchandising Officer John Fleming are making their moves for family reasons. Mr. Castro-Wright is leaving the role as U.S. CEO of the Walmart flagship to focus solely on global sourcing and e-commerce duties he already had but will now run from the Brisbane, Calif., office, closer to where his wife is recuperating from a heart transplant, Mr. Tovar said. Mr. Fleming, who announced he would leave the company a few days after Mr. Castro-Wright's new role was unveiled earlier this month, wants to be closer to his family, who remained behind in Minnesota after the former Target executive came to Walmart nearly a decade ago.

He said the Project Impact program remains on track, with plans to remodel 500 stores this year, and that the "Win Play Show" strategy of giving categories differing sizes and promotional intensity based on their strategic importance remains in place, too. "Retail is a constantly changing science," he said, adding that "Mr. Sam said you don't just keep doing something because it worked once."

As such, he said Walmart's strategy is evolving, and would have evolved regardless of what managers are in place. "Taking merchandise out of the Action Alley and providing clear sight lines has been a successful strategy," he said in an e-mail, but added, "We are constantly listening to our customers and some have told us they liked seeing the rollbacks on merchandise in the aisles. .... We have given more autonomy to our store managers to make the decisions on what is right for their customers."

Some of Walmart's evolutions appeared obvious in the stores themselves over the Independence Day weekend and the week that followed, just after the personnel moves was announced. The pallets and four-way merchandising displays that once clogged aisles formerly known as Action Alley were back in full force at many stores, completing a reversal that began earlier this year. Refurbished "Impact" stores didn't have the full array of in-aisle displays, but they had more than they'd had in the past year.

The retrenchment comes only eight months after Mr. Fleming told analysts that the program to clear aisles of merchandise displays had worked so well in? "Impact" stores that it would be extended to all stores, and less than a month after Mr. Castro-Wright chided critics in a June session at the company's shareholders meeting, saying that while the retailer had suffered some "self-inflicted wounds," stores "don't have to look bad" to be consistent with the Walmart brand.

The removal of the displays has been among the factors that most irritated many suppliers who lost in-store marketing opportunities or had to pay more for the remaining ones as a result.?

One person close to the company, noting a big display of watermelons next to little-girls' dresses in Bentonville area stores, said, "I think Sam [Walton] would be smiling about that." He wasn't so sure, though, how Mr. Sam would have reacted to the idea, attributed to Mr. Fleming, "of removing 15% of the inventory from the stores because surveys show consumers see it as improving the experience."

He likened Walmart's move to become more like Target to Coke changing its formula to be more like Pepsi after the Pepsi Challenge taste tests of the 1980s. "A lot of people did like Pepsi -- and those were mostly Pepsi drinkers," he said. Blind taste tests aside, there were always a lot more Coke drinkers in the U.S., and changing the formula alienated them until Coke offered the old one again.

In similar fashion, Mr. Fleming led a drive to make Walmart look more like Target , a move that played well in consumer experience surveys but didn't necessarily translate into increased sales for the retailer, which has had four consecutive quarters of declining U.S. same-store sales even as competitors from Target to dollar stores saw improving results.

The detachment of the current Walmart management team from the retailer's roots has been a recurrent theme among some supplier executives, some of whom knew Sam Walton themselves -- although most of Walmart's current leaders didn't.

Walmart's recently refurbished management team isn't entirely a blast from the past, but it does at least signal moderation on the Project Impact front. New Walmart U.S. CEO Bill Simon is a relative newcomer. He's best known for two things: launching Walmart's widely lauded and copied $4 generic prescription program and rhetorically pulling back some of the perceived excesses of Project Impact.

Last year, at a time many suppliers had their doubts amid a ramp-up in Walmart's Great Value private label, Mr. Simon at an analyst conference reiterated that Walmart is a "house of brands" dedicated to working with brand suppliers. Subsequently, Great Value expanded well beyond what many expected based on Mr. Simon's pronouncement, but in most every category where it gained share, Walmart lost overall category share to other classes of trade, said Deutsche Bank consumer products analyst Bill Schmitz.

Then in April, Mr. Simon in an analyst conference acknowledged Project Impact had gone too far in some cases, affecting top-line results, and that about 300 items that had been removed were coming back. Mr. Simon, 50, is seen by Mr. Nicholas and others close to the company as a candidate to succeed Mike Duke, 59, as CEO of Walmart Stores, along with Doug McMillon, president of Walmart International, whose business has been the bright spot for Walmart and who was the only executive confident enough to hold a separate press event during the retailer's shareholder meeting last month. But Mr. McMillon, who's run Sam's Club and international, has yet to be tested running the retailer's biggest and most competitively challenged unit: Walmart U.S.

Replacing Mr. Fleming, at least on an interim basis, is a mix of old and new executives.

They include John Westling, who started as an hourly associate in 1988 and is one of the few remaining executives besides Mr. Scott to have worked under Sam Walton; and Jack Sinclair, a veteran of Tesco and Safeway in the U.K. who joined Walmart only two years ago.

For the past decade, Walmart's strategy has swung from combating the more-upscale competitive threat from the likes of Target and Costco to addressing the downscale threat from dollar stores. But efforts to hold on to more upscale consumers it attracted during the recession appear to have largely missed. Walmart appears increasingly focused on the downscale threat, which also appears to be the biggest based on aggressive expansion plans by chains such as Dollar General and hard discounters Aldi and Save-A-Lot.

Key to that are initiatives increasingly discussed by Mr. Duke in recent months to refocus on price through its Rollback program and to test smaller-store formats that can bypass zoning restrictions in big metropolitan areas as well as take on smaller rivals that beat Walmart in convenience shopping trips. But there are big challenges on both fronts. Walmart has yet to find a small-store format that produces the sales and profits of its supercenters, and it faces another branding challenge in putting forward hybrid supermarket/supercenter stores that appear to offer the price and selection a supercenter does without fully delivering, said one person familiar with the retailer's efforts in the area.

On pricing, Walmart is "following a deflationary strategy at a time when inflationary pressures are growing," Mr. Schmitz said. Supplier commodity costs are inching up, he said. And, in a bigger challenge to Walmart, which sources 70% of its merchandise at least in part from China, the impending appreciation of the yuan and growing assertiveness of Chinese workers makes higher prices almost inevitable.

Developments in China, he said, could? make Mr. Castro-Wright's global sourcing duties much more of a full-time job as Walmart seeks new sources of cheap supply in other countries. And his e-commerce duties are also becoming more? important as big Walmart suppliers in package goods, such as P&G on its own and other consumer product companies collectively through Alice.com, develop their own e-commerce storefronts.

Meanwhile, package-goods players show signs, publicly at least, of standing up to Walmart on some of its more aggressive demands. Executives of P&G and Clorox Co. have said on recent conference calls that they aren't funding the deep "Rollback" discounts Walmart has in stores on their products.

At the same time, suppliers appear to be so far resisting another margin-boosting effort by Walmart: a demand by the retailer that it take over deliveries of products to their own stores. So far, suppliers are mostly mulling the demand without signing up, said Leon Nicholas, insights director at Kantar Retail. And the biggest of all, P&G, is continuing to implement a new U.S. logistics system that would appear to preclude shifting duties to Walmart. A P&G spokesman said the company always looks to work closely with Walmart, but declined to comment specifically on the transportation issue. ?