For Walmart, Sustainability Is Slow Going

While It Pushes to Meet Its Own Goals, Retailer Finds Dragging Others Along Easier Said Than Done
READ THIS NEXT
What retail marketers are prioritizing for the post-pandemic era

After years of leading the sustainability charge for much of the retail world and its supplier base, Wal-Mart Stores is finding that progress can be slow, even though it commands the most purchasing clout in the world.

Walmart but its Great for You label on its own Great Value brand, but other manufactures have yet to follow suit.
Credit:
SIPA USA
Former CEO Lee Scott launched the company's well-publicized sustainability drive seven years ago. Walmart now faces not only criticism for the creaky pace of change on the supplier side but also questions about whether current CEO Mike Duke is as committed to sustainability as Mr. Scott was.

Walmart's annual Sustainability Report, released last week, highlighted progress in waste reduction and renewable energy, as well as in creating a "Great for You" nutritional label and a sustainability index to help the company's buyers evaluate purchases in 100 categories, from laundry detergent to home electronics.

But one of Walmart's most ambitious efforts as a sort of self-appointed private-sector regulator -- to develop a simple package label to guide shoppers toward sustainable choices -- isn't coming easily.

Nor is it entirely within Walmart's control. At the outset, the company consigned the project to a Sustainability Consortium, whose 90 members now include rival retailers such as Kroger, Safeway and Best Buy; and a host of suppliers, including Procter & Gamble Co., Unilever, Coca-Cola Co., Disney and Dell.

Academics from the University of Arkansas and Arizona State University are overseeing the process. 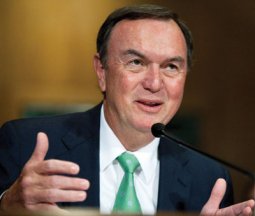 Some have questioned whether current Walmart CEO Mike Duke is as dedicated to sustainability as his predecessor was.
"Yes, it's taking a little bit longer," said Brooke Buchanan, director of sustainability communications for Walmart. "But now we have partnered even with some of our competitors to determine what the best next step is to provide customers with the transparency they deserve."

Ms. Buchanan said that the sustainability index (which Walmart buyers are expected to be using by the end of this year) is an intermediate step focused where it was easiest to quantify the product life cycle and sourcing issues.

The "Great for You" logo, which Walmart is adding to its own Great Value-branded products that meet certain health criteria, is another step toward a broader sustainability ranking for merchandise.

The logo is also available to other brand manufacturers, and while Walmart has discussed it with some, none have committed to adopting it yet, Ms. Buchanan said.

When Mr. Duke announced the index in 2009, the executive said that he expected it to be done within five years, which would be July 2014. But not everyone is pleased with the pace of progress, and some believe the self-appointed industry regulator needs to look more closely at itself.

Jeffrey Hollender, co-founder and former CEO of green-cleaning company Seventh Generation, joined Walmart's sustainability bandwagon in 2009, when -- after years of refusing -- he finally allowed the brand to be distributed in its stores.

Mr. Hollender left Seventh Generation a year later, and last month he fell off that bandwagon with a post on the Triple Pundit blog.

"Was Walmart ever serious?" Mr. Hollender asked. "Yes. I've looked Lee Scott in the eyes -- he was a believer." But from the day Mr. Duke became CEO in 2009 "the initiatives that Lee Scott championed but never saw come to fruition stalled and then slowly unraveled," he wrote.

Among other things, Mr. Hollender cited a recent Mother Jones report in which one of Walmart's China suppliers said that the company's drive to reduce costs by 3% to 5% a year left no margin for investing in green projects.

In addition, a report last month from the nonprofit Institute for Local Self-Reliance faulted Walmart for dragging its feet in instituting the index, reducing waste and converting to renewable energy.

Walmart begs to differ on all points.

"We are very proud of the progress we've made," Ms. Buchanan said. "We could have set easy goals [in 2005], but we decided to set the aspirational goals to make a systemic change in our business and, hopefully, the world."

Though Walmart has not met its goal of using 100% renewable energy, it does get 22 % of its energy from such sources, Ms. Buchanan said. Of that 22 %, 4% comes from on-site generation via windmills or solar installations at Walmart facilities.

The other 18% of power from renewable sources is purchased "off the grid" from outside providers, she said, but the retailer decided not to buy "offsets" that could have made it appear to reach its goal without actually changing its power sourcing.

The company also hasn't reached its goal of sending no waste to landfills but recycles 81% of its waste, she added.

Ms. Buchanan said that Walmart remains intent on improving the working conditions and environmental practices at plants that supply the company in China and elsewhere.