Is Watson a Sign of Progress or Case of Man vs. Machine? | Ad Age
Skip to main content

Is Watson a Sign of Progress or Case of Man vs. Machine?

Yorktown Heights, N.Y. -- With "phobias" the category and a Daily Double at hand, Watson, using just a sliver of his immense processing power, made his bet: $1,800, the exact amount by which the supercomputer was leading me. The question flashed on the screen and was read by a rather garrulous researcher playing the part of Alex Trebek, in our no-stakes match.

Watson answered fast -- too fast, perhaps. The soft, robotic voice with a halting cadence, more Garmin GPS than HAL 9000, phrased his answer, as "Jeopardy!" rules mandate, as a question.

The IBM supercomputer conceived, designed and built over seven years at a cost of untold millions and designed to do one thing and one thing only -- play "Jeopardy" -- had beefed it in the most embarrassing of ways, except of course silicon doesn't get embarrassed.

Had he -- no, it -- buzzed in with the right response, our little match probably would have been over at the start. But I was still in it, contrary to all expectations. My hope of hopes was to sneak past Watson's formidable buzzer reflexes to get, maybe, one or two questions right. But going into Double Jeopardy, we were tied. In my mind, that was a dramatic turn. If a journalist and onetime loser of the real "Jeopardy" TV game show can keep pace with artificial intelligence, then there's hope.

My game with Watson and an IBM lobbyist who was a good enough sport to round out the lineup, was the computer's first game since tangling with probably the two greatest "Jeopardy" players ever, the legendary Ken Jennings and Brad Rutter. That matchup, which will air this week, is the most visible IBM branding exercise since chess champion Garry Kasparov was torched by Deep Blue, a much less intelligent ancestor of Watson, in 1997. But chess, for the likes of IBM's collective brainpower, was a comparatively easy challenge because of the small number of scenarios and outcomes that can occur. Mastering the game doesn't require artificial intelligence; mastering the way humans communicate does.

Nothing less than man vs. machine is the issue posed here. What if a computer can answer questions better than some of our fastest-thinking humans can? At what point do we become their servants? Or have we already?

"Don't play." The semi-joking advice from Noah Syken, manager for sponsored advertising and branded content development, on how I should handle my opponent, rang in my head as he gave me a pre-match tour of Watson's home, in a ground-floor room with a glass window in an IBM research facility just north of New York City. Inside the room, it is warm and loud, thanks to the cooling operation that fans Watson, a computing beast composed of 90 IBM Power 750 servers, 16 terabytes of memory and four Terabytes of clustered storage, all encased in a sleek black shell festooned with a dynamic logo that's a twist on IBM's corporate identity. 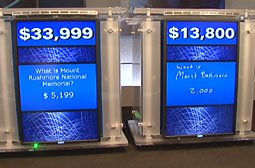 Just across the hall is an auditorium where the Jennings-Rutter-Watson competition was taped. Sony and "Jeopardy" had essentially recreated the set you see on regular episodes, adding a few bits of flair, like a giant and apparently delicate Watson logo on the floor. By the time I got to Yorktown Heights, the official "Jeopardy" props were gone, though the rudiments of a set are still in its place for PR purposes.

Watson -- or rather his avatar -- occupies the middle podium of the three contestants. As you'd imagine, an extraordinary amount of thought went into what the TV manifestation of the machine named for legendary IBM President Thomas Watson should look like. A chief question was whether the computer should be rendered in something approaching human form. That approach was dismissed, though, in large part because of the issue of trust.

"You have to be approachable so, right away, we knew we weren't going to have red lasers shooting out of this thing's eyes," said David Korchin, group creative director at Ogilvy & Mather, IBM's agency. "It's hard not to personify Watson. It's hard not to call it a him."

Ogilvy had seen thinking that said the more human artificial intelligence appears, the less it's trusted. The decision to go with something more abstract led Ogilvy to the generative artist Joshua Davis, but, in the end, Watson's face didn't take the team terribly far afield. It ended up being an adaptation of IBM's Smarter Planet logo, a globe with thought rays emanating from the top.

Watson's "face" is displayed on a rather ordinary-looking monitor manufactured by Dell. After a question is asked, the results of all that processing going on across the hall get passed on to the avatar, which during the game pulses with intellectual activity.

As I stepped up to my podium, getting ready to play, I peered down to find a bit of clutter in the form of Windex bottles and dirty rags and, to my utter surprise, the Macbook Pro, the kind made by Apple, once IBM's fiercest rival, connecting the Watson avatar to the mainframe across the hall.

Steve Jobs, young and handsome and healthy and not yet wearing his signature black turtleneck, takes the stage. The crowd roars and "What a Feeling" by Irene Cara blares. Mr. Jobs bounces along, smiling and surveying the adorers that came out for the company's annual keynote.

The music stops, and he speaks deliberately: "It is 1984. It appears IBM wants it all. Apple is perceived to be the only to offer IBM a run for its money. Dealers, initially welcoming IBM with open arms, now fear an IBM-dominated and -controlled future. They are increasingly and desperately turning back to Apple as the only force that can ensure their future freedom."

The lights go down and on a massive screen plays the Ridley Scott-directed film that, in introducing the Macintosh, would become one of the most famous commercials ever. Captured for perpetuity on YouTube, the keynote also kind of serves as a marker of the descent of IBM, from a post-war giant equipping American business with mainframe computers to, by the early 1999s, a nearly bankrupt concern posting record losses.

In 1993, new CEO Lou Gerstner began a turnaround, shifting the company out of manufacturing and into software and services, where it plays today. IBM, though still a household name, is no longer a consumer brand.

The televised "Jeopardy" matches -- during which it is opting to not air any corporate ads -- will probably provide many consumers with their first excuse to think about IBM in quite some time.

If it turns out the way IBM's Mr. Syken hopes, the matches will show off technology that can be used to support businesses such as health care and retail, and paint for folks a rosy portrait of how computers and people can interact. When we were chatting inside Watson's room, Mr. Syken told me about a participant in an early focus group, a concierge at the Waldorf-Astoria who saw endless potential in having a piece of technology that could help him with recommendations, directions and other chores based on the retrieval of information.

When I asked if that concierge had gone a step further and wondered about that computer taking his job, Mr. Syken said that there is a group of people who see Watson as HAL 9000, the computer that offed a few astronauts in "2001: A Space Odyssey," come to life. This group shows up in blogs and on YouTube and, in their most extreme, are ridiculous and paranoid.

But there is risk here. Deep Blue wants Watson to convey the image of man and machine working in harmony, which is the dynamic sought by David Ferrucci, the IBM scientist who led the Watson program.

Does IBM really want that sort of message out there? That you might survive the inevitable AI invasion of our daily lives if you possess some sort of freakish smarts, but if you show up with anything less, suddenly you're one of those gray drones being barked at by a figurehead from "1984"?

A Chance at Redemption

My preparation for going up against Watson was minimal. The only "Jeopardy" I'd watched of late was an episode I had starred in. Back in September, having surprised myself by passing several rounds of auditions and satisfying other requirements to appear on the show -- which is to say I was neither a criminal nor a politician -- I flew to Los Angeles and taped a show that aired just after Christmas.

During the six weeks or so I had to prepare, hours upon hours were spent gorging on U.S. presidents, the periodic table, composers and Shakespeare. I reenacted past matches obsessively catalogued on a site called The J! archive and played along with broadcasts, all with pen in hand as a makeshift buzzer. Have you ever read an almanac straight through? I did, on my flight to L.A.

"Jeopardy" tapes five episodes a day, two days a week, a maniacal production schedule that puts everyone involved through the ringer. I didn't get the call for my match until midafternoon, by which time I'd watched three games. The adrenaline that began surging when I woke up in my Culver City hotel room wore off sometime during the second match. I was yawning. And then yawns gave way to sweat. Once I got to the podium, spackled in makeup to take the shine off my bald noggin, a bit of sweat appeared on my upper lip. I hadn't noticed until, from offstage I heard a makeup artist say loudly enough for the studio audience to hear, "Hold up, he's sweating."

As the game progressed, the all-important commercial breaks that could have been spent going over strategy were dominated by the frantic reapplication of foundation. And there was my gameplay. It sucked: Dumb guesses, combined with a sudden self-doubt that preventing me from answering even questions I knew, such as the baseball star Frank Thomas' nickname is "The Big Hurt." I finished in second place and left the Sony lot furious at myself. It was an all-too-human performance, fueled by anxiety and stress and fear of failure.

Oh, to be a machine, I thought, while the train rumbled along an icy Hudson River on my 70-minute commute to my faceoff against Watson.

Low-grade panic began to set in, as I slouched in the tacky leather seats made all the worse because I knew my opponent was in the midst of what passed for rest in its world. If nothing else, he was blissfully free of self-awareness.

When the match began, it was almost immediately apparent that Watson is not without flaws. There's the aesthetic stuff, especially the halting way it talks. "The pronunciation isn't perfect," said Mr. Syken, "but it could have been if we wanted to spend the time and money." And the kind of clues that make it work harder or trip him up require more untangling. The burden is understanding the clue, not tracking down the answer in his enormous database.

In the end, Watson won $33,999, to my $13,800. A beatdown to be sure, but not without a bit of redemption. Nailing a Daily Double and Final Jeopardy, moving around the board more aggressively, and, quite simply, setting and exceeding a reasonable goal all helped to erase the sting of playing so poorly the first time around. And I have Watson to thank for that. Maybe man and machine can live in harmony, after all.