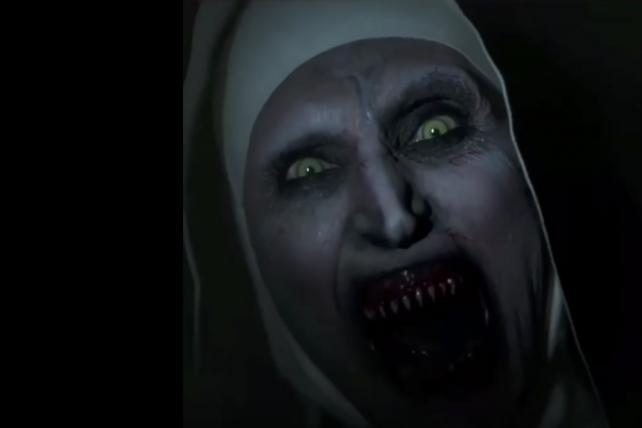 Welcome to Ad Age's Wake-Up Call, our daily roundup of advertising, marketing, media and digital news. You can get an audio version of this briefing on your Alexa device. Search for "Ad Age" under "Skills" in the Alexa app. What people are talking about today: YouTube viewers have complained of being freaked out by the sudden appearance of a zombie-nun on their screens. It's an ad for the horror flick "The Nun," and it comes out of nowhere. One Twitter user shared a warning about the ad that was retweeted 134,000 times. As Gizmodo reports, YouTube says it removed the ad for violating its rules on violent and shocking content. YouTube's list of no-nos includes content with a lot of blood or guts, and promotions that are "likely to shock or scare."
Just a thought: It's possible the team behind "The Nun" is delighted the ad was deemed too scary for YouTube. "This is the best possible press for a horror movie," tweeted John Squires, editor of a horror genre website, Bloody Disgusting. "YouTube removing the ad is infinitely better marketing than the ad having been left up."

'This is a commercial'
A week ago, protein bar marketer RXBar released a commercial in which rapper/actor Ice-T pops out of a window and says, "Hi, I'm famous, and this is a commercial." Now Esurance is doing a similar schtick. As Ad Age's Adrianne Pasquarelli writes, the new ad from the Allstate-owned brand stars Dennis Quaid, who says: "Hi there. This is a commercial about insurance." He continues: "Let's be honest—nobody likes dealing with insurance, which is why Esurance hired me, Dennis Quaid, as their spokesperson because, apparently, I'm highly likeable." He's likable indeed, but note to other brands: If you're thinking about doing this kind of thing, it will probably get old fast.

For sale?
"New York Media, owner of New York magazine and several websites, is exploring options including a possible sale, according to people familiar with the matter," The Wall Street Journal reports. The holding company, which is controlled by the Wasserstein family, also owns websites including The Cut, Vulture and Grub Street. Together the publications have been a bright spot in a tough industry. Back in December, when Ad Age named New York magazine its Magazine of the Year, we reported details on New York Media's strong audience and digital ad revenues growth. So do the owners really want to sell? Their response has been enigmatic so far; they say that "given the growth New York Media has seen, it makes sense for us to evaluate the market for opportunities to continue to develop the business."
Also: The Financial Times followed up on the Journal's report; it says New York Media hired investment bank LionTree to look for buyers.

Something to read with your coffee
A fascinating New York Times Magazine cover story this weekend explores how a real estate developer in California -- someone with no background in internet privacy issues -- suddenly got interested in Google and Facebook and started the campaign that eventually led to California's new data privacy law. It started at a dinner party where the real estate guy, Alastair Mactaggart, chatted with a friend who was a Google engineer. An excerpt from the story by Nicolas Confessore:

Mactaggart asked his friend, half-seriously, if he should be worried about everything Google knew about him. "I expected one of those answers you get from airline pilots about plane crashes," Mactaggart recalled recently. "You know — 'Oh, there's nothing to worry about.'" Instead, his friend told him there was plenty to worry about. If people really knew what we had on them, the Google engineer said, they would flip out.

Just briefly:
Another longread: NBC News follows the trail of who's making money off the Qanon conspiracy theory, raising the question of whether the whole thing is just a money-making scam.

Seven days: Twitter suspended the account of conspiracy theorist Alex Jones for a week, The New York Times reports. He had "tweeted a link to a video calling for supporters to get their 'battle rifles' ready against media and others, in a violation of the company's rules against inciting violence," The Times says.

Across the pond: In the U.K., "Amazon's one-day delivery ad for Prime members has been banned as misleading," The BBC reports. "The UK advertising regulator said it had received 280 complaints, mostly from Prime customers who reported not receiving their packages within a day."

5G: "Verizon is close to deals making Apple and Google its first video providers when it launches a superfast 5G wireless service in four cities later this year, according to people familiar with the situation," Bloomberg News reports.

The Tiger effect: Tiger Woods' run in the final round of the 100th PGA Championship was the most-watched, highest-rated PGA Championship broadcast since 2009, as well as "a godsend for CBS," writes Ad Age's Anthony Crupi.

The new cola wars?: Coca-Cola Co. is buying a minority stake in Bodyarmor, the sports drink backed by former basketball star Kobe Bryant; Bloomberg News says it's another move from Coke "to diversify beyond sugary, fizzy beverages." Bodyarmor's marketing takes jabs at Gatorade, which is owned by PepsiCo.

Performance: Gore-Tex has a new product line called Gore-Tex Infinium, with non-waterproof fabrics designed for sportswear, and there will be a campaign to introduce it. Read more by Ad Age's Adrianne Pasquarelli.

Why everyone's talking about mayonnaise: Philadelphia Magazine columnist Sandy Hingston wrote a piece called "How Millennials Killed Mayonnaise," and people are amused. (Mayonnaise is "too basic for contemporary tastes -- pale and insipid and not nearly exotic enough for our era of globalization," she writes. "Good ol' mayo has become the Taylor Swift of condiments.") In Ad Age, Simon Dumenco looks at why it went so viral.

Ad of the day: A new ad shows a father and his small son setting out before sunrise for quality time together in the great outdoors. "This is what wakes us, this is what brings us together," a voiceover intones. But the spot isn't going where you think it is, since it's an ad for "NFL GameDay Morning." Read about it from I-Hsien Sherwood, and watch it here.

Next, Ad Age's biggest event of the year, has added new speakers including Daniel Cherry, chief marketing officer at Activision Blizzard Esports Leagues; Pras Michél, the Fugees co-founder now creating Blacture; Natalia Oberti Noguera, founder and CEO of Pipeline Angels, the network of women investors; Meiling Tan, head of marketing at Waymo; Dara Treseder, chief marketing officer at GE Ventures; and Jen Wong, the chief operating officer at Reddit. They join a Next lineup already stacked with CEOs, investors, founders, innovators and marketers, coming together Nov. 13 and 14 in New York to describe the near future in everything from AI to food. Today is the last day for early-bird tickets.