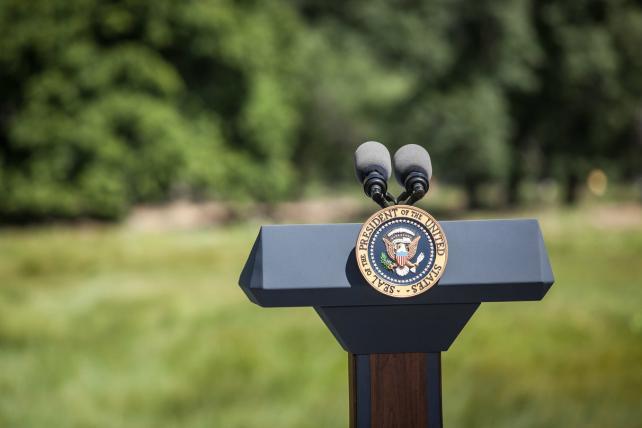 Welcome to Ad Age's Wake-Up Call, our daily roundup of advertising, marketing, media and digital news. You can get an audio version of this briefing on your Alexa device. Search for "Ad Age" under "Skills" in the Alexa app. What people are talking about today: What does President Trump think of Nike's new ad featuring Colin Kaepernick, who started the NFL anthem protests? "I think it's a terrible message," he told The Daily Caller. He added a Trumpian aside: "Nike is a tenant of mine. They pay a lot of rent." (Niketown New York has been in a Trump-owned building, though it's in the process of moving.)
Trump has repeatedly criticized NFL players who protest social injustice and police brutality during the national anthem, saying it's disrespectful. Later in the Daily Caller interview, Trump added more nuanced (and maybe surprising?) thoughts about Nike's choice. "In another way, it is what this country is all about, that you have certain freedoms to do things that other people think you shouldn't do, but I personally am on a different side of it," he said.

"It's a bold move in an age where marketers often talk a big game about becoming part of the cultural conversation, but often fall short by refusing to take much of a stand on anything. 'Most brands try desperately to stay out of highly charged political issues. In this case Nike is almost inviting the controversy,' says Tim Calkins, a marketing professor at Northwestern University's Kellogg School of Management."

Fallout: Predictably, some people set their sneakers on fire. And Nike's "stock closed the day down roughly 3.2 percent, as #NikeBoycott was trending on Twitter," CNBC writes.
Praise: Patriots quarterback Tom Brady "liked" Nike's message when GQ magazine shared it on Instagram, CBS Boston reports, adding that Brady almost "always avoids commenting publicly on controversial matters, though he has expressed support for Kaepernick over the past couple of years."

'An empty chair'?
Twitter CEO Jack Dorsey and Facebook COO Sheryl Sandberg will be on Capitol Hill today, testifying before the Senate Intelligence Committee about protecting their platforms against election interference. (Later in the day, Dorsey is expected at the House Energy and Commerce Committee too.) Alphabet CEO Larry Page isn't expected at the Senate event, and neither is Google CEO Sundar Pichai. Recode, previewing the hearings, writes:

"Alphabet/Google argues that the exec it wanted to send instead — top lawyer Kent Walker — would do just fine, but committee chairs Sen. Mark Warner and Sen. Richard Burr disagree. So expect them to place an empty chair next to Dorsey and Sandberg during the session, to publicly shame Google for not sending their most high-profile execs."

Chairs can have a powerful impact on optics. Remember when Facebook's Mark Zuckerberg testified in Washington and the internet made fun of his "booster seat"?
Also: "Google says it's securing its ad platform against foreign meddlers, but for just $35 researchers posing as Russian trolls were able to run political ads without any hurdles," BuzzFeed News writes.

Trillion
After Apple, Amazon just hit $1 trillion in market valuation. That's an abstract-seeming number, so The New York Times put all the zeros ($1,000,000,000,000) in its headline. And The Wall Street Journal says $1 trillion is about the combined valuation of seven consumer giants: Walmart, Home Depot, Procter & Gamble, Costco, Nike, Kroger and Dollar Tree.
Reality check: "Apple had profits of $48 billion last year. Amazon's were less than a tenth of that," The Times writes. Maybe Amazon's growing ad business can help with that.

Just briefly:
What's next for WPP?: In an earnings call, the new CEO mentioned the need to boost creative agencies: "We need to have stronger businesses with better work, better strategy, better reputations as well as ensure that those companies have the capabilities that they need to grow," Mark Read told analysts. The agency giants' creative shops include J. Walter Thompson, Ogilvy, Young & Rubicam and Grey. Read more by Ad Age's Megan Graham.

Shopping: Instagram is at work on a standalone shopping app, The Verge reports. "The app—which may be called IG Shopping—will let users browse collections of goods from merchants that they follow and purchase them directly within the app, according to two people familiar with the matter," The Verge writes, noting that Instagram declined to comment.

JD.com: The founder of Chinese e-commerce giant JD.com, Richard Liu, was arrested in on a rape allegation while on a business trip in Minnesota, The New York Times reports, citing the Minneapolis Police Department. Liu was freed without bail and has returned to China, the report says. The company, the main challenger to Alibaba Group, says the allegation was false.

The midterms: Ad Age's 2018 midterm Campaign Trail coverage looks at the marketing and media messaging of congressional and gubernatorial campaigns. Here's one example: Simon Dumenco writes about "the oddest attack ad you'll see ... today, at least." It's from the campaign of Sen. Ted Cruz of Texas and it attacks his challenger, Beto O'Rourke, for profuse use of the F-word. But O'Rourke comes out looking pretty good, actually. Watch it, and read more here.

Ad of the day: "The NFL lifted its ban on liquor ads last season, but put tight regulations in place that do not apply to other advertisers," including the requirement that ads carry a social responsibility message, Ad Age's E.J. Schultz writes. Which explains why a new Crown Royal ad shows everybody in a bar taking a break to chug … water. Check it out here.