Move is Next Consumer-Generated Campaign for Chain
READ THIS NEXT
Lady Gaga's Oreo collab predicts a brighter 2021, and the Super Bowl is selling out slowly: Thursday Wake-Up Call
Advertising Age Player

Wendy's is borrowing from the aesthetic of Federico Fellini and Bernardo Bertolucci for what it's calling its first "short film," part of a promotion for its latest limited-time product, the Tuscan Chicken on Ciabatta sandwich.

On Monday the chain will release a "trailer" for a video called "L'Estrella de la Toscana," or "Star of Tuscany" in English. But Wendy's is calling on consumers to write the subtitles for the short movie itself, which is broken into three acts and will be close to 9 minutes total. Wendy's plans to post scenes from the movie on its Facebook and Twitter pages and ask users for the subtitles, with the best ones making it into the final movie when it's released in early May. 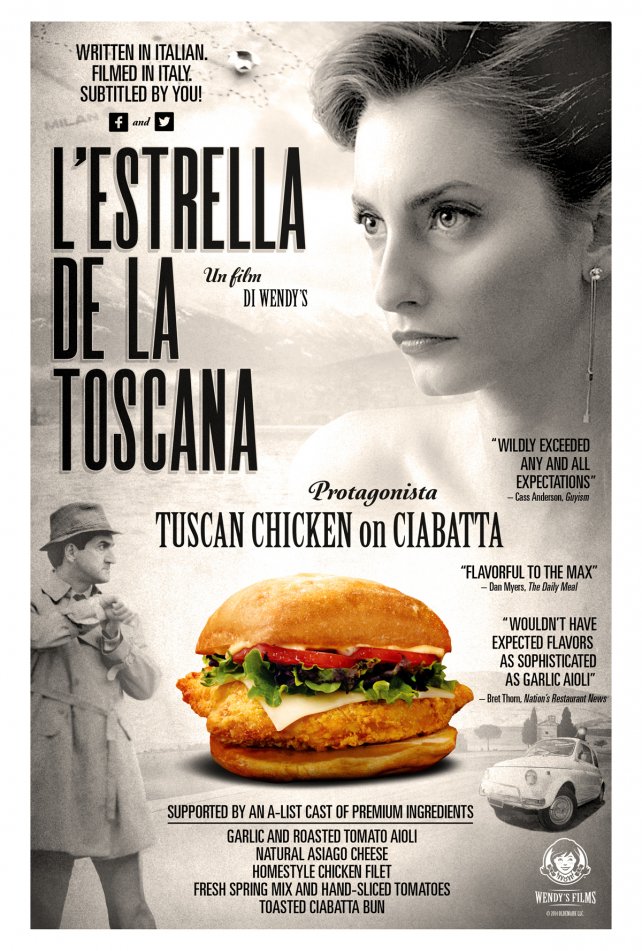 Wendy's Chief Marketing Officer Craig Bahner said that the chain is l returning to a digital execution, created by VML, because its digital campaign from last year for the Pretzel Bacon Cheeseburger created a high level of engagement for millennials, an audience Wendy's has been seriously courting in recent campaigns.

Mr. Bahner declined to detail the plot of the movie, but it said it was shot in Milan and included a diamond thief, a detective and a godfather figure.

The TV spot for the Tuscan sandwich will feature the recurring "Red" character that the chain introduced two years ago.

Though the biggest portion of spending will go to the TV spot, created by Publicis Kaplan Thaler, digital campaigns are playing an increasingly critical role, Mr. Bahner said. "Consumers today are not just sitting around waiting for ads to appear on TV," he said. "We have to engage when and where they want to engage, and in today's world that's through mobile and social media."

Mr. Bahner, who joined Wendy's two years ago, said that his mission was "to explode digital."

"That led to hiring VML, and this has continued to grow in importance and stature and reach," he said.

Wendy's in March took its mobile offering a step further and introduced payment-by-app nationally, just a few days after Burger King said it was expanding its mobile payment offering.

As for the sandwich itself, Wendy's says it's not just another chicken sandwich with some marinara sauce and Parmesan cheese, touting a garlic and roasted tomato aioli sauce with chopped tomatoes, along with Asiago cheese, a chicken filet, spring greens mix, sliced tomatoes and toasted ciabatta bread.

Liz Geraghty, VP-brand marketing at Wendy's, said that while the chain makes it a priority to introduce products with ingredients not found at other fast-food chains, it also wants to promote them in an accessible way. "We're serious about the food but don't want take ourselves too seriously," she said. "It's about entertaining people and making food that's a cut above the competition."