U.K. Insurance Brokerage Rewarded for Taking Up Space in Struggling Skyscraper
READ THIS NEXT
Trump spends big on the late-night TV shows that ridicule him daily 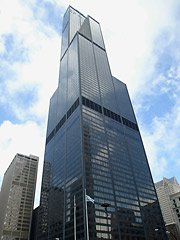 Joseph J. Plumeri, chairman-CEO of Willis Group Holdings, said 'Having our name associated with Chicago's most iconic structure underscores our commitment to this great city.'
For free.

Willis Group was given the naming rights after it agreed to take 140,000 square feet of office space in the 110-story high rise, which has been struggling to attract tenants ever since the September 2001 terrorist attacks made such high-profile office buildings less desirable.

The top billing is notable considering Willis won't be the skyscraper's largest tenant, and its $14.50-per-square-foot rent is less than half of what some other tenants are reportedly paying (and also "significantly" cheaper than what Willis was paying at its five area offices). A statement from the owner of the Sears Tower said the terms were accurate, but incomplete: "We are very pleased with the financial terms of this new lease. The details that have been disclosed are not a complete picture of the agreement. We view the economic terms to be proprietary information, and do not reveal those for any of our transactions."

Scrambling to stay occupied
That said, it is clear that the Sears Tower has been scrambling to remain occupied lately.

Last fall, Ad Age sibling publication Crain's Chicago Business reported that five tenants accounting for 40% of the building's rent were weighing whether to move out.

The idea of selling naming rights for the building has come up before. Sears Roebuck built the building in 1974, moved out completely in 1992 and finally sold it to an investment group for $840 million in 2004. Documents from the sale of the tower reportedly estimated that the naming rights might fetch as much as $10 million. But in the current market, they're merely a sweetener. The press release announcing the move said the company would have no additional costs associated with renaming the building.

"Having our name associated with Chicago's most iconic structure underscores our commitment to this great city, and recognizes Chicago's importance as a major financial hub and international business center," said Joseph J. Plumeri, chairman-CEO of Willis Group Holdings.

Name may not be embraced
It's not entirely clear how quickly the city will embrace the new name, if they do at all. Many Chicagoans still refer to the city's most famous downtown department store -- now a Macy's -- as Marshall Field's, and a fair number of White Sox fans still call their U.S. Cellular-sponsored stadium "Comiskey Park."

An unscientific poll on the Chicago Tribune's website showed that more than 95% of the 4,500 respondents intended to continue calling the building by its former name. Said one reader comment on the site: "What you talkin' bout Willis? It will always be the Sears Tower."