Bloomberg Gets His Way: Board of Health Approves Sugary-Beverage Ban | Ad Age
Skip to main content

Bloomberg Gets His Way: Board of Health Approves Sugary-Beverage Ban

'This Is Not the End,' Says Beverage Spokesman
READ THIS NEXT
MDC's second quarter revenue plunges and a housing crisis brews: Friday Wake-Up Call

New York City's Board of Health today approved a controversial ban on the sale of large sodas and other sugary drinks. The ban could go into effect as soon as March 2013. 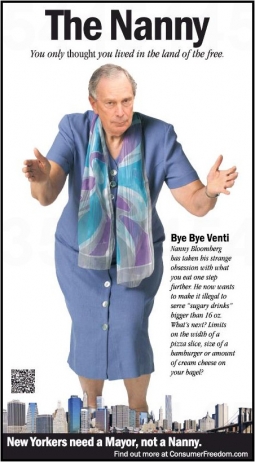 Ad attacking 'Nanny' Bloomberg
Eight board members voted in favor of Mayor Michael Bloomberg's proposal, zero opposed and one abstained. Still, board members bristled at the idea that they were widely expected to "rubber stamp" the proposal, with several noting they spent hours reviewing comments and testimony. In total, the Health Department received 38,701 oral and written comments. Of those, about 32,000 comments were in favor of the proposal, while 6,000 were opposed. One opposing petition, however, included 90,000 signatures.

Following the hearing, Eliot Hoff, spokesman for New Yorkers for Beverage Choices, spoke out against the proposal, noting that the group is considering its legal and legislative options. "This is not the end," he said.

It is Mayor Bloomberg's most aggressive move yet to curb obesity rates and improve New Yorkers' health. Many of the measures adopted in New York have become models for other cities, such as restrictions on smoking and trans fats and the requirement that restaurants post calorie counts next to prices. Board members expressed the hope that the ban on large, sugary drinks would also become a model for other cities.

The city says 58% of New York City adults and 40% of children are overweight or obese, and one in eight adult New Yorkers has diabetes. According to the Bureau of Chronic Disease Prevention and Tobacco Control, obesity costs New York City $4.7 billion annually in medical costs, which equates to $1,500 per household.

Susan Kansagra, assistant commissioner of the Bureau of Chronic Disease Prevention and Tobacco Control, summarized the comments received for the board and addressed critics point by point. During the meeting, she spent time addressing the economic impact, as well as the impact on consumer choice. She pointed out there was a similar uproar when the city enacted bans on smoke-free restaurants, trans fats and the removal of lead from paint. Those things are all now widely accepted.

"We'd like to point out this proposal is not a ban," Ms. Kansagra said. "Individuals are still free to consume sugary drinks. Many people already have limited choices and this proposal introduces more choices, healthier choices."

As for the economic impact, Ms. Kansagra said the "commercial impact of policies is often overstated." She noted that receipts collected at Starbucks locations following the requirement to post calories showed no evidence of revenue loss. She also said there was no evidence of profit losses resulting from the trans-fat ban. She also pointed out that consumers prefer "one-stop shopping," so it is unlikely they will go to an unregulated location to purchase larger beverages.

Still, at fast-food and fast-casual restaurants, carbonated soft drinks account for about 10% of sales in the U.S., according to restaurant market-research firm Technomic. That's a sizable portion of top-line sales, but factor in the profitability of soft drinks for the chains -- a 90%-plus profit margin -- and the potential wallop to the bottom line becomes clear, particularly for franchisees. 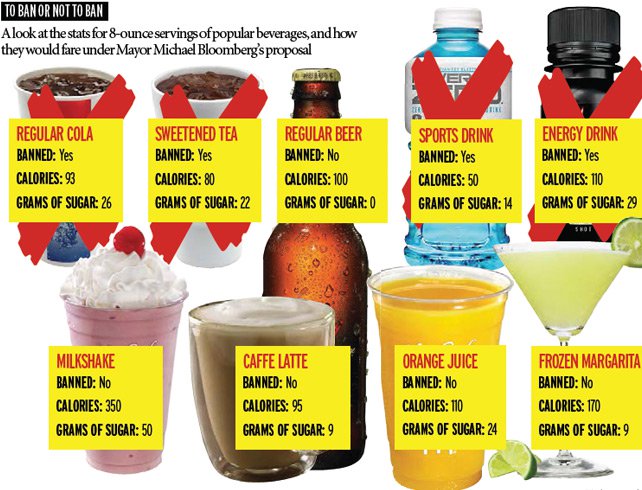 As fast-food chains grapple with the new restrictions, it's expected they will turn to other products that have high margins. Fruit drinks and drinks that contain 51% or more milk or milk substitute are exempt from the ban, leaving calorie-rich and sugar-laden items such as milkshakes, lattes and frozen-fruit smoothies ripe for promotion. The ban will likely have a dramatic affect on Starbucks and Dunkin' Donuts, which combined have hundreds of locations across the city.

The sweeping ban prohibits the sale of large sodas and other sugary drinks, such as energy drinks and some iced teas, at restaurants, movie theaters, sports arenas and street carts. The ban does not affect beverages sold in grocery or convenience stores (so those Big Gulps at 7-Eleven are safe). And it does not apply to drinks with fewer than 25 calories per 8-ounce serving, such as diet sodas and unsweetened iced teas. "Large" is designated as any container holding more than 16 ounces.

Cups or bottles bigger than 16 fluid ounces (the average soda bottle is 20 ounces) are affected. Restaurants will be required to serve fountain cups that are 16 ounces or less, limiting many to sizes currently classified as small or child. For example, a medium fountain cup at McDonald's is 21 ounces, while a large is 32 ounces, according to its website.