What's this?
This content is created by an Ad Age Publishing Partner. Find out more about this program.
NPR

Smart speakers have been on the market less than three years but are already having a tremendous impact on people's lives. Today, more than 7% of the U.S. population 12-plus own either the Amazon Alexa or Google Home and use these devices to shop, respond to ads and interact at home with their families, according to The Smart Audio Report from NPR and Edison Research. And while marketers are experimenting with the most effective ways to optimize this technology, it's clear that everyone should be paying attention to this new and valuable platform that's rapidly becoming more than just a device to play music.

Ninety percent of owners initially purchased the devices to listen to audio, according to the Smart Audio Report conducted earlier this year. Gradually, however, smart speaker users started adding tasks such as timing laundry or checking the weather. And it wasn't just tech-savvy early adopters who were using the devices: Even people who are typically afraid of technology began depending on smart speakers once someone else in the household set them up.

"I use it more than I thought I would. I thought it would be really something [my husband] would play with but...we use it for the thermostat a lot. It's really handy when you are upstairs, because [the thermostat] is so far." —Survey participant

In fact, 42% of current users say that smart speakers already are essential to their everyday lives, and some even view these devices as a companion rather than a gadget. The Smart Audio Report found 61% of users say having a smart speaker is like having someone to talk to, and 65% say they wouldn't want to go back to life without their smart speaker. For users with children, 80% say the smart speakers make it easier to entertain their kids, allowing them access to music or reading stories to them.

More importantly for marketers, smart speaker users are also using the devices to shop. Consider these points from new data released this week from The Smart Audio Report:

Why Smart Speakers Matter to Marketers
While marketers figure out how to best drive commerce on these devices, it's critical that they stay on top of what's happening in this area as smart speakers change purchasing behaviors. Here are three key things marketers need to know about smart speakers:

1. It's important for marketers that are involved in audio to teach their audiences how to use smart speakers—how to ask for things correctly. For example, if you ask your Alexa, "Play lite FM," it won't necessarily play lite FM in New York—it may play a lite FM station in Beirut.

2. Smart speakers are bringing listening back into social social settings. We've just gone through a solid decade of earbud listening, with people tuned in to their own music, digital services such as SiriusXM Radio or Spotify and podcasts. Smart speakers are changing that, making listening a social activity again. Families are gathering around an audio device in a way they haven't done since the 1930s because it's fun.

According to the survey, 44% of smart speaker owners with more than one person in their home said that having the device in their home has helped them spend more time with other people.

For marketers, this opens up opportunities to create or sponsor audio content, such as ads and podcasts, that is designed to be listened to by families or groups in parties and other social settings.

3. Finally, marketers need to recognize that smart speakers remove obstacles—friction—from the buying process. As brick-and-mortar stores know, it's very difficult to compete with Amazon because Amazon is pretty ruthless in removing friction from the shopping experience, making it easy for consumers to buy things.

Our survey found that 31% of users say they are purchasing more on Amazon and Google since getting their smart speakers. What that says is that friction can be removed even more from the buying process, and getting in on audio is a simple way to do that.

Looking Ahead
Smart speakers are still catching on as people adapt to this new technology and spread the word to friends and family—in fact, 69% say they have encouraged friends to buy one. While there are some obstacles to purchase, such as privacy issues or concerns about price, a lot of these will go away as people learn to use and enjoy this technology, much like when online shopping was first introduced. Plus, with 72% of users saying they don't know enough about their smart speakers to take advantage of all of its features, education will play a role, expanding usage as people learn how to do more with the technology.

Finally, while smart speakers are being marketed as a fun way to listen to audio, they are, in reality, inexpensive, incredibly frictionless computers.

Consumers now have access to a cheap, easy-to-use computer just waiting to take orders in every room of their house, and marketers must to be ready to show brands how they can engage on this platform. We are just scratching the surface of all the opportunities that smart speakers bring to consumers, content, brands and marketers.

For 50 years, NPR has led the audio industry with the #1 and #2 drive-time on-air programs, Morning Edition and, All Things Considered, and 8 of the top 20 podcasts in America, including Up First, Planet Money and Hidden Brain. With 35news bureaus worldwide, NPR brings the most important stories to wherever people are listening–from radio, podcasts, smart speakers to live events. NPR continues to innovate across content and technology to make NPR accessible to more people in more places, and to support its sponsors in elevating their audio strategies for today's media landscape. 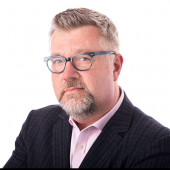 Tom Webster is VP of strategy for Edison Research (@Webby2001 ), a custom market research company best known as the sole provider of exit polling data during U.S. elections for all the major news networks. He has nearly 20 years of experience researching consumer usage of technology, new media and social networking, and is the principal author of a number of widely cited studies, including The Social Habit, Twitter Users in America and the co-author of The Infinite Dial, America's longest running research series on digital media consumption. For more on these topics, check out www.brandsavant.com.