Teaching craft in a designed world

Having gone through a traditional graphic design undergraduate and industrial design graduate education in craft-based schools, and now teaching in a graduate design program at another, I often wonder how to best prepare the designers of tomorrow for the problems they'll face in a changing world. The generalist issues I deal with at work are very different that the ones I encountered during my education, but as my work evolves, more and more I find myself relying on skills that I learned in school.

The role of craft within design has become increasingly relevant. As design becomes more of a generalist field, with designers expected to be conversant in a far wider variety of areas than in the past, it's important that we have a process to lean on, a foundation to build upon, and an understanding of how it, and we, became this way.

To start with, I think you have to understand "craft" both as it relates to design (graphic and industrial), but also how it relates to larger culture. You can do this by looking at the changing role and definition of craft throughout recent history. Broadly speaking (and to generalize horribly) everything was smooth sailing until the industrial revolution of the 19th century. At that point, mass production gave rise to the designed (or machine-made) object, displacing craft from its historic role in the specialized, skill-based making of applied objects. "Thinking is making" became "Thinking about making."

An unfortunate side effect of mechanization was the sidelining of traditional craft (one-of-a-kind objects, created by a craftsman or specialist user of tools) from mainstream production. In that equation primacy was awarded to the thinking-man and generalist controller of machine and process (the "designer"). Interestingly, a similar intellectual vs. skill-based split occurred in fine art the early 20th century with the rise of Duchamp's "conceptual," ready-made objects. Fine art has never really recovered: witness Damien Hirst et al. But that's another story.

The cultural changes that led to the displacement of craft within larger society have been the subject of much theoretical and political posturing and debate, the result of which is our confusion about where and how craft fits into contemporary design. Karl Marx, for example, spent much time detailing the relative values of the machine-made object vs. the craft-object in capitalist society. One of Marx's key arguments was that the division of labor necessary for volume production in the modern factory or workshop was a tool used by the controlling classes to limit the minds and education of the ordinary worker (in a capitalist society the worker would have a shallow understanding of machine-centric tasks rather than the deep understanding of a tool-based skill-set that might exist in other cultures). Keep in mind that Marx was, of course, advocating a non-capitalist economic system.

For a number of reasons, including the dominance of traditional craft-based fields in art schools, the personal value systems of educators, and the intellectual history of many art schools as craft academies, the pre-Industrial Revolution convention of deep, hands-on specialization across narrowly defined core disciplines is still prevalent in academia. This has made life difficult for applied design fields like graphic design and industrial design, which swim in the capitalist economy where more generalized skills, mass-production and the machine economy are facts of life. The response from many applied design departments has been to advocate deep, craft-based understanding during the undergrad education process (often at the expense of theory) and then to flip entirely and focus on theory at the expense of making at the graduate level. 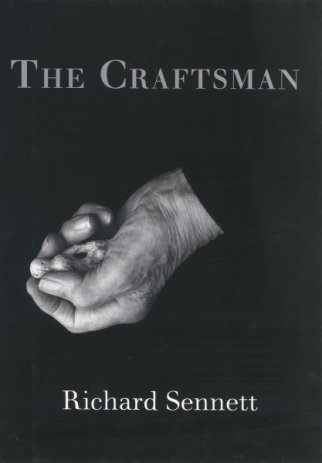 I think at this point it's important to remember that craft, by definition, is fundamentally a dedicated mastery of a chosen subject matter, not necessarily just the deep understanding of a specific material or tool. Richard Sennett, in The Craftsman, cites a commonly understood 10,000 hour figure as the time needed to master any particular skill, from violin, to carpentry, to painting, to surgery:
"As skill progresses, it becomes more problem-attuned, such as the lab technician worrying about procedure?whereas people with primitive levels of skill struggle just to get things to work. At its higher reaches, technique is no longer a mechanical activity; people can feel fully and think deeply about what they are doing, once they do it well."

If you think of craft as the dedication to "do a job well for its own sake" as Sennett does, then it becomes easier to create bridges between a theory-based and skill-based school of thought. His point is that "craftsmanship focuses on objective standards, on the thing itself. Social and economic conditions, however, often stand in the way of the craftsman's discipline and commitment: schools may fail to provide the tools to do good work, and workplaces may not truly value the aspiration for quality..." Craft " focuses on the intimate connection between hand and head. Every good craftsman conducts a dialogue between concrete practices and thinking; this dialogue evolves into sustaining habits, and these habits form a rhythm between problem solving and problem finding."

I would argue that, as designers moving inexorably further from specialist to generalist roles, we need to be better at both identifying and teaching the underlying habits and structure that lie between practice and thinking, and using those habits until they become second nature. When we can rely on structures to support our advances into unknown design problems, we don't worry as much about taking the first step, or screwing up the execution of our idea. Those on the making side must focus more on the theory and reasoning behind the things they create, and vice versa; those on the theoretical side must hone their ability to create. Ultimately the best-looking thing is meaningless if there's nothing behind the fa?ade, and the best story is useless if nobody can understand it. My sense is that at the most fundamental level, as designers we need to focus on gaining resolution in the tension between concrete practices and thinking.

As more and more of our design problems become entirely systemic or have no physical instantiation, we must rely on craft-based structures to guide us. There is probably always going to be some gulf between those that value "thinking is making" and those that value the intellect or concept over the physical. If we understand the principles that lead to that confusion or tension, we can recognize the gulf as it happens and try to design reconciliation.

Foundation in design school used to be seen as gaining knowledge in a certain physical process (typography, printing, color theory etc.) but those tactical tools in themselves fall short of the needs designers face today. Technology is moving at such a pace that we can't hope to spend 10,000 hours in any one discipline and be certain that the discipline itself will remain relevant or timely. Luckily we can offset some of our learning time to the tools themselves. It doesn't take as much time to gain mastery of Photoshop and pixels as it does to master a lathe and to understand grain patterns of wood. Thus, we can focus on the process behind the tools themselves, abstracting the tool to a behavior (a balance of both theory and making) that can be applied to any number of design problems. This allows us flexibility while also staying true to the changing nature of craft itself.

Nick de la Mare
View all articles by this author