When It Comes to Tragedies, Try Human First, Brands Second

Over the last week, we've experienced the tragedies of hurricanes Harvey and Irma. The DACA program announcement ignited extreme passions. North Korea tested a nuclear bomb. And the anniversary of 9/11 is upon us—a national observance that gets brands in trouble every year.

I can imagine a whole lot of meeting-room discussions in marketing departments nationwide about whether their brands should "say something" in relation to one or more of these emotionally sensitive current events.

There is no simple answer, but I do have some simple advice: Be human.

Brands have a hard time not acting like brands. But "acting like a brand" in these instances is exactly what gets brands in trouble. Slapping a logo on a post about a tragedy is like sending a condolence card and enclosing your résumé. It's gross, insensitive and tone-deaf. You wouldn't act like that in real life, so don't act like that as a brand.

So, within this context of being human, let's think about some important questions.

Where should we say it?

There are a lot of platforms available to brands these days: social media, brand websites, press releases, produced ads, online videos and more. Where and how you say something matters. The more slick and produced something looks, the less genuine it tends to feel. (Not a hard-and-fast rule, mind you.) Think about where it will feel the most authentic.

How should we say it?

Sometimes, to stop acting like a brand and start acting human, it helps to purposely do things that the brand wouldn't normally do. A high-end production is likely to feel like an ad. A CEO speaking to her webcam is likely to feel more genuine. Or, if the brand's Twitter stream is normally filled with product-centric messages, maybe share a screen-shot of a note from the people behind the brand. This will help put some distance between how you "normally act" and the gravity of the current situation.

Can we do something instead of saying something?

In the aftermath of Harvey, I've been constantly amazed and impressed by what the Texas-based grocery store chain H-E-B has been doing—especially considering that three of their own stores were completely devastated. No amount of well-intentioned social media posts measure up to getting out there, being part of the community and making a difference during a tragedy. Not every brand will physically be part of the community, as H-E-B is, but every brand has the opportunity to take action instead of just talk.

What do our values tell us?

Most brands have their values typed up and posted somewhere out there. But values are most proven during challenging times. Take a look at those values and they should point the way to how your brand can speak authentically. And if there's a mismatch between your values and the topic, stay away.

Should we just stay away?

A completely valid question. "Don't go there" is often championed as the safe, responsible approach. But not saying something sends a message too. As does saying all the normal stuff you like to say when the world is focused on tragedy. Nobody wants to hear about your Labor Day Sales-a-thon when bigger issues are on top of everyone's mind.

How can we use this opportunity to drive sales?

Don't. Just don't. That's the icky thing to do, not the human thing to do. Now is the time to give, give, give. Don't even expect acknowledgement, because it will taint what you say and how you say it. These moments are not about you, so expect nothing in return. I promise, any hint of self-promotion, self-adulation or expectation of outpouring of support for your brand tweet about a tragedy will undoubtedly lead to negative outcomes.

But surely we should include our logo?

Companies are, at the end of the day, made up entirely of people. And you are speaking exclusively to an audience made up of people. So simply be human. Use that as a filter and it's much easier to make challenging decisions during challenging times. 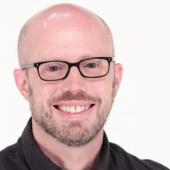