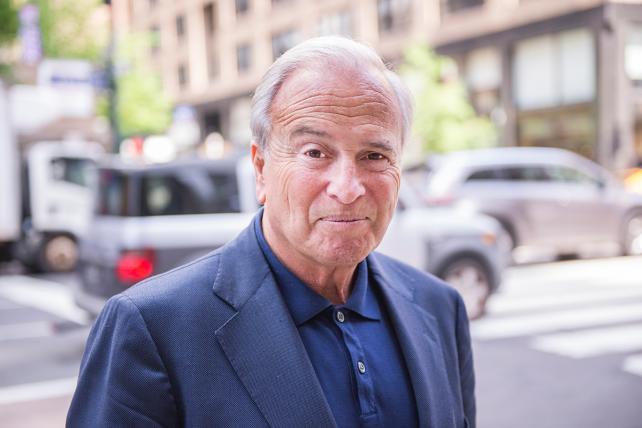 If you follow the advertising business in any way, you're going to be hearing Ken Auletta's name a lot this month.

Auletta, who has been writing the Annals of Communication column for The New Yorker since he was hired by Tina Brown in 1992, is the author of a new book about the industry's current existential crisis. "Frenemies" comes out June 5. He'll also be at Cannes at the end of the month interviewing Martin Sorrell on stage.

This, however, is our moment to turn the tables on Auletta and interview him for the Ad Lib podcast. This Q&A has been edited and condensed for flow. Some highlights.

Who are advertising's "frenemies?" It's not just Facebook and Google.
The frenemies are agencies' former friends and now competitors, including the clients who were taking more advertising in-house. Those frenemies are a threat to the ad agencies and the media agencies. But the existential threat to the entire business, to advertising itself, is the public, which doesn't want to be interrupted by your ads. And has tools like ad blockers to stop them or has things like Netflix and YouTube and HBO that don't have ads.

Ads fund the media and the public clearly wants media—they just want it for free. What's the end game? Is everything going to become a subscription model?
I don't think it does go to the subscription model. The math doesn't work because the one thing that Donald Trump and Hillary Clinton agreed on in the 2016 presidential campaign is that the middle class and the working class were strapped. They had no income growth for a decade.

You're not really in the business of predicting what comes next. But what comes next?
[Laughs] The real conundrum is a privacy conundrum. What people in the ad business will say to you is that the answer is, "Make ads that are more useful to people because you know more about them." And therefore you can target ads. "Hey Ken, we know you bought a sport jacket at Barney's last week. You're walking by Barney's now and why don't you go into Barney's and get 20 percent off on your jacket, wouldn't that be great?" Well, that's a service for me. On the other hand, what happens if I say, "Who gave you permission to know that much about me?" And you look at what's happening in Europe…

With GDPR?
And people having to opt in, you know, rather than opt out.

Will that sort of regulation come to our shores?
The one thing that unites the frenemies in this world is opposition to that kind of legislation. They've all come out with public statements. Clients, ad agencies, the duopolies, the digital companies. They don't want to be deprived of that weapon of information of data.

The public is one frenemy that is not united.
That is absolutely right.

So do you see that kind of regulation coming to the States eventually?
Western Europe has a tradition of concern about privacy much more intense than we have in the United States. What's interesting when you watch the Mark Zuckerberg testimony before the Congress is it seemed like the often semi-literate members of Congress were more concerned about privacy than I think the American public has been.

You call them "semi-literate members of Congress," but I think that they're a reflection probably of most Americans who didn't realize to what extent Facebook is mining their data.
That's absolutely right. On the other hand, one of the things that people at Facebook and more intensely people at Snapchat, believe, is that people, younger people, are less concerned about privacy. And is that true? I don't know. It's too soon to hazard a guess as to whether the American public will rise up about privacy protections or not. They should. But if they do, the consequences for the ad industry are profound.

As a vehicle for telling this story, you select a lot of personalities as main characters. You have Carolyn Everson, Martin Sorrell, Bob Greenberg, Gary Vaynerchuk, Keith Weed all from various corners of the industry. How do you settle on who to focus on to tell a story like this?
I didn't know very much about the advertising industry. As I went in and I started interviewing people, I would always say to them, "Who else should I be sure to talk to?" And you don't have an idea of a narrative or of characters until much further along. Yes, I had an idea that Martin Sorrell might be a character and I knew him. And Martin agreed warily. There's certain things he wouldn't do. He says, "You can't sit in any of my strategy meetings."

You didn't go to any pitches either.
No. The one frustration I had. I thought I had AT&T when they were deciding whether WPP or Omnicom, would be their one agency, umbrella agency, in the summer of 2016.

It would be amazing to be a fly on the wall.
Yeah. That would be a whole thing. Randy Rothenberg [president and CEO of the Interactive Advertising Bureau] did that several years ago in a very good book about advertising. But in the end, they said no. And I suspect because they worried I'm sitting in meetings, they're going to slip and say something and they're seeking governmental approval, it could be embarrassing for them.

But really the main character at the end of the day was Michael Kassan, founder and CEO of MediaLink. Why him?
Michael Kassan represents the clients who are going through the agency reviews. So the agencies are scared to death—what is he whispering in their clients' ears? So they retain him or they advertise for his dinners and cocktail parties in Cannes or CES, etc. And then the platforms, the publishers all retain him. If there's negotiating at a table between the agency and the client and the publisher, Michael is sitting there and he represents all three of them. And then when you spend time with him, I mean he's a colorful, funny guy.

He's a charming dude. But how does his job not become a conflict of interest?
Well he says no conflict, no interest.

You kick the book off fairly deep in the weeds with the rebate scandal, which is not really easy for the general public to digest. Still, a lot of the stuff in the book is familiar to people in the industry; there's not a ton of surprises. So who's the intended audience?
You start with the ad community. That would be a base. But if it were just that, it wouldn't be broad enough. So you think about the publishers and the media that's dependent on advertising. The general public might be fascinated in a character like Michael Kassan or Martin Sorrell.

Things happen so rapidly in this space. When you look at Cambridge Analytica and Facebook, the election, brand safety, YouTube, what has been arcane is now mainstream. This affects everyone. It's not esoteric; all of this is culture.
I'm amazed for instance that The New York Times no longer has an advertising column. To me it's insane.

It took them days to get to the Martin Sorrell news in a meaningful way. [Sorrell resigned abruptly as founder and CEO of WPP in April amid allegations of misconduct.]
And you're right, I think that everyone has a stake in it. It's a potentially broad audience. It's every day we're encountering something about it, be it the privacy, the testimony, the bots, whatever.

Your sources throughout the book seem to embody a mixture of disbelief, anger, fear, denial, hope—there's a lot of emotions. What are you feeling?
I harken back to something Camus once wrote. Here's a guy who was in concentration camps, arrested by the Nazis for being part of the French resistance, a great novelist, an observer. And he once said that a good hope is better than a bad holding. So there's a part of me that's always optimistic and says the digital revolution is not a problem, it's an opportunity. I mean that's a basic posture I would take. But if you ask me intellectually do you believe Ken that there really is an existential crisis that threatens the very fabric of advertising? I would say yes I do.

What does Martin Sorrell's departure mean for WPP and the holding company model more broadly?
One of the mistakes I think he made as a manager is he's an unbelievable micro manager. I mean, you e-mail him and he's on his Blackberry—he still has a Blackberry—and within five seconds or five minutes he's back to you. Without a COO, which was a frustration to his board, everyone's reporting to him. He owns over 400 companies. So the span of control is too great, even for someone as talented as he.

Do you have a favorite ad from either your childhood, or of all time?
Well I'll tell you what's not my favorite ad. One of the most popular ads in history is the Coke ad, everyone on the mountain…

You wouldn't like to give the world a Coke?
What does that tell you about Coca Cola? Zero. It's just manipulative. It's emotionally manipulative. I mean I got chills when I saw that ad. But as I thought about it, I said, what are they doing to me? It's like one of those Budweiser ads. I find it very manipulative.

Talk about growing up.
I grew up on Coney Island. I was a semi-juvenile delinquent, thrown out of high school. Got back in.

All good reporters are semi-delinquent.
I was more incorrigible than that. And I had a 64 average and I got into the State University of Oswego only because the baseball coach liked my fastball. And then at some point I got more serious. Got a masters in political science and then went to work in politics. Worked for a guy by the name of Howard Samuels who was running for governor of New York. With my help he lost. I worked for Bobby Kennedy in the presidential campaign and he lost. After Samuels lost for governor—I was about 30 years old—I decided to freelance, freelance covering politics. Then I was hired by The New York Post and fired after two weeks. I was supposed to write a column as well as be the chief political reporter, and they thought my column was critical of the publisher's friends.

Do you miss covering politics? Is this an administration you would have liked to dig your teeth into, or are you breathing a sigh of relief?
I'd had enough. You take different surprising routes in your life and I love, I love this world.