CHICAGO (AdAge.com) -- Made in France, C?roc vodka has what importer Diageo likes to call "liquid credentials" -- it is one of the first vodkas made from fine French grapes, mauzac blanc and ugni blanc, and it is distilled five times. 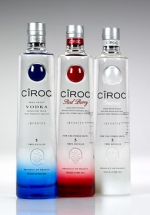 But what really sets this brand apart are its street credentials.

Sales have skyrocketed since Diageo in 2007 partnered with hip-hop mogul Sean "Diddy" Combs, who has described himself as a hybrid brand manager, chief marketing officer and spokesman.

"In the African-American community, he has a lot of influence," said Megan Metcalf, editor of Wine & Spirits Daily. "He did a good job of reaching out to them, and from there it sounds like they had more Anglos in other markets jumping on board."

Sales jumped 41% to $6.8 million in the year ended Oct. 3, according to SymphonyIRI, which excludes Walmart, club and liquor stores, and bars and restaurants. Diageo says the brand grew 552% from 2007 to 2010 and has replaced Belvedere as the second-ranked vodka in the "ultra-premium" category.

Demand has surged this year partly in response to C?roc's first line extensions, which include coconut- and red-berry-flavored vodkas.

But it all still goes back to Diddy. Before him, Diageo used to focus on the grape, said Jon Dobbin, a senior VP at MediaCom, the brand's media agency until January, when Diageo will hand duties to Aegis' Carat. "That whole grape story just didn't work, because nobody really cared. It didn't carry around enough cachet."

Rather than "targeting the herd," MediaCom focused advertising on a "key group of influential people," executives said, and ran ads almost exclusively on a handful of networks including Bravo and E!, plus publications such as Vibe and Hip Hop Weekly.

Ads also target more traditional upscale audiences, including buys on Plum TV, a resort network shown in Aspen, Nantucket, the Hamptons and Miami Beach that goes for an "active, influential and educated" demographic.

The brand has positioned itself as the "Official Vodka of New Year's Eve," and has sponsored red-carpet telecasts at award shows.

Diddy set the tone early, telling Ad Age in 2007 that "I've branded myself as the king of celebration, and that's what this alliance is all about."