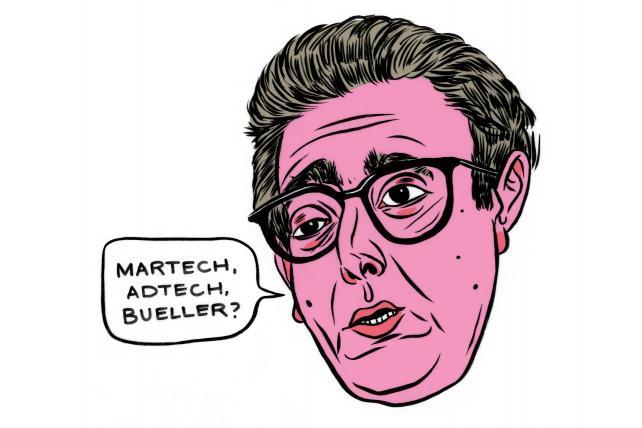 Here's a neat party trick if we're ever in the same room and you want to see my eyes roll all the way into the back of my head and my entire body shut down as if I were some sort of robot that's just been unplugged. Turn to our glossary on page 16. See those words? Just start using any of them and I'm done for.

To be fair, if you're a creative and you start using some of your made-up creative words like ideate, or you turn concept into a verb, I'll shut down, too. But I'm a creativist at heart. (See, I can make up words, too. Creationist was already taken.) I like smart branding campaigns. I think companies still have to cast a wide net to reach a wide target to convince people beyond power users to sample their wares. Hell, I like seeing a good 30-second spot—as rare as those are—plopped into the middle of my broadcast or cable TV.

But I also get the quest for extremely precise targeting, the desire for automation and that basic need to feel like you're spending your marketing dollars on something that delivers concrete results.

But the analogy doesn't hold up.

And it's just wrongheaded: based partly on my resistance to technology taking over everything and partly on the fact that it's all just so damn confusing.

As a writer, even I can admit that sometimes words fail. And you can pile up all the right words in just the right order and the workings of programmatic and marketing tech don't become any clearer. Even after you strip away all the acronyms and the jargon.

And please don't point to the Lumascape. The Lumascape is not helpful, unless further confusing the issue is considered helpful. Hey. We took all the companies working in the space and put their names and logos on a piece of paper. Now do you get it? No.

Hell, it wasn't until Rubicon Project's Jay Sears came to the office and drew pictures and flowcharts for us that it started to seep into my thick skull.

It doesn't exactly get the blood racing. But it is fascinating in its own way. And it's something we'll be covering more and more, because it's also important.

At the heart of all this, of course, is data. Despite what latter-day Don Drapers will tell you, marketing's always been data-obsessed. And while we've gotten better and better at collecting and storing data, the issue now is what to do with it, how to sift through it and use it and, just as important, how to keep it safe.

And this needs to be done in a calm, collected manner without trying to instill fear or confusion in the hearts of marketers. That's another reason I don't like the Lumascape. I feel like there's an implied message that you should be totally overwhelmed by the topic and go running to the nearest consultant for help.

"There's so much noise around ad tech, martech," Neustar CEO Lisa Hook recently told me when she and CMO Steven Wolfe Pereira stopped by Ad Age HQ. I'd asked her about the Lumascape, all those companies making up an entire universe. "They're products or product fragments," she said, adding that that isn't necessarily a bad thing. "It's a green-field environment. Let a thousand flowers bloom." But she does see that universe shrinking. "In three or four years I don't really see anybody talking about martech or ad tech."

Yes, the money is still flowing into marketing tech. In a recent Wall Street Journal piece, Jack Marshall noted that PitchBook data showed that venture capital investment for martech companies reached over $1.2 billion last year and is expected to surpass that this year.

But, Marshall pointed out, "For many marketing and ad tech companies, the goal is to ultimately sell to a larger player."

Hook, who's got a legal background, a thing for good grammar and a sly sense of humor, didn't even use the phrase martech until I brought it up, causing her to roll her eyes.

"We hate the descriptor," she said. She sees her own company as in the information-services space. Which is not a surprise considering it sits on so much of it. The company got its start managing the North American Numbering Plan—in other words, all the phone numbers on the continent. It's also the registry operator for .biz and .us, among others. And it provides DNS services. And after a string of acquisitions in the early 2000s, it moved into marketing and security services, everything from fraud protection to targeting to data onboarding and analytics. "At some point, we realized marketing is going to absolutely need to know who they're talking to."

For a creativist like myself, it all sounds vaguely scary. You think about all the data out there and all the companies moving it around, where do you even start? How many pieces do you need to stitch together?

"To be successful as a marketer today, I have to run an IT department, and I'm going to be so distracted," said Hook. "It's like a Rube Goldberg machine for marketing. It's crazy."

The smart marketer isn't going to get bogged down in those details. As P&G CMO Marc Pritchard said to agencies earlier this year, "Frankly, your complexity should not be our problem, so we want you to make that complexity invisible." Ultimately that's going to apply to tech vendors as well.

Hook agrees. "Tech is a component, it's a tool that you use to get the answer. … How do you create the machine that's super elegant, you hit the button and the answer comes out?"

When it comes to marketing tech, she says, "Boring is good. Boring delivers."

The goal of any successful martech or adtech or information services company, she says, should be to make it all seem easy so that marketers can go back to worrying about campaigns and creativity and strategy.

Maybe it's just me, but I find that kind of talk sort of exciting.