Under Armour Exec Offers Play-by-Play Behind Bold Brand Buy
READ THIS NEXT
Subscriber Exclusive: May 11, 2020 issue of Ad Age

No Super Bowl spot this year had more riding on it than Under Armour's dark and intense 60-second spot that was set to air in the first quarter. Consider that the marketer's stock fell more than 35% -- obliterating more than $700 million in market capitalization -- after word leaked that the marketer was shelling out close to a third of its full-year 2006 ad budget for a single commercial to back its first foray into non-cleated footwear. While stock eventually regained most of the lost value, the evidence of what was at risk wasn't lost on Steve Battista, Under Armour's VP-brand, who recounts for Ad Age his experience as a first-time Super Bowl advertiser.


The thing about the Super Bowl, they tell you, is that you have to bring the slapstick or make a groundbreaking statement. Well, we haven't poked fun at our brand yet, and we don't embarrass our athletes, but we do have a message we're dying to tell the world. 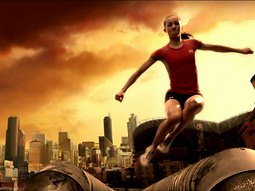 Not for everyone: Kids loved it in focus group -- grown-ups groaned.
When the date was secured last year, thus began 13 months of putting together this yearlong campaign, which for the entire brand team meant pre-apologizing to our wives and kids then collecting ourselves in the war room at night and on weekends to write the story. We tagged the campaign "The New Prototype" after Under Armour's new way of training. We've spent more than a decade getting athletes out of old-school cotton T-shirts and into performance apparel. Now, it's about introducing the world to Under Armour Performance Footwear.

At Under Armour, the brand team has done the creative and buying in-house since the early days when we didn't have the money for a TV commercial, let alone an ad firm. Our team on this spot, including Marcus Stephens, senior creative director; Todd Montesano, director-advertising; Nathan Shriver, interactive art director; Eric Clemmer, art director; and about a dozen or more talented designers and marketing minds helped build the plan and craft the message of the campaign. Our founder and leader, Kevin Plank, the New Prototype of CEOs, always plays the dual role of visionary and creative conscience, making sure every single detail is accounted for, and most importantly, that the creative is authentic.

Forget the meter
But a funny thing happened during the creation of this spot. It became bigger than a Super Bowl commercial. More than a footwear launch campaign. Before the creative was even unveiled to the entire company, the New Prototype had already become our corporate mentality; the approach we take in every aspect of business.

As the New Prototype of Brands, we're on a mission. And we like that chip placed firmly on our shoulders. As people began telling us, 'You can't not be funny in the Super Bowl,' we took the creative to an even harder place. And further over the top. Even Wall Street assumed we had spent too much on the ad and took a severe cut at us. We decided not to go into this to score high on any kind of meter or scale. We're doing this to send a message: "LEAVE EVERYTHING behind. ... The game has changed, it all starts today."

We've never been much into focus groups, but the few informal gatherings we did proved beneficial. The kids loved it. Their parents scrunched their noses and said it's "too loud" and "too fast" and that they didn't get it.

The ad ratings for the big game may not show it, but that's OK. We think you can go into the Super Bowl without slapstick humor as long as you have a mission. Our brand's mission is to make all athletes better. And the goal of our marketing is not to appease analysts but to inspire athletes. All athletes. Especially the young ones. As Big E says to all the New Prototypes in the ad: "The future is ours!"

Steve Battista
View all articles by this author