Andrew Meurer, VP-feminine and Adult Care
READ THIS NEXT
Subscriber Exclusive: May 11, 2020 issue of Ad Age

BATAVIA, Ohio (AdAge.com) -- Kotex had been losing share for a generation, largely to Procter & Gamble Co.'s Tampax and Always. Kimberly-Clark Corp.'s last big attempt to shake things up -- a redesign that broke a category taboo by putting flowers and splashes of red on Kotex packages -- only made things worse.

So institutional memory wasn't an ally when the company contemplated shaking things up again. 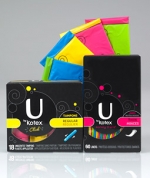 The idea was U by Kotex, a premium-priced line aimed at younger women, featuring black packages holding products in a rainbow of wrappers, designed by CBX, New York. Backing the launch were irreverent and unconventional TV and online ads from WPP's JWT and Omnicom's Organic, both New York, that poked fun at the long heritage of category ads featuring cheerful women frolicking in white slacks, followed by the inevitable blue-fluid product demos.

In a "Break the Cycle" campaign online, viral videos showed men approached on the street and asked to buy tampons; a guy in a supermarket fem-care aisle asking women and men for help selecting a product for his girlfriend; and a highly suggestive inkblot test. Kotex also developed an instructional video on how to use a tampon. It all aimed to shift the hushed conversation toward "vagina care."

Andrew Meurer -- who recently left his post as VP-feminine and adult care for personal reasons -- and Organic CEO Marita Scarfi also got attendees at a Cannes seminar on U to shout "vagina" to break the ice on the topic.

Results have been phenomenal since the April launch. Kotex's share was up 2.2 points in sanitary pads and 5.2 points in tampons in the third quarter on sales increases of 13% and 57% respectively, according to SymphonyIRI data from Deutsche Bank. Data including unmeasured outlets such as Walmart and club stores have been better still, Mr. Meurer said.

The launch has won young consumers in a category where that has a big lifetime value. Loyalty to feminine-protection brands is higher than almost any other category in packaged goods, said Mr. Meurer.