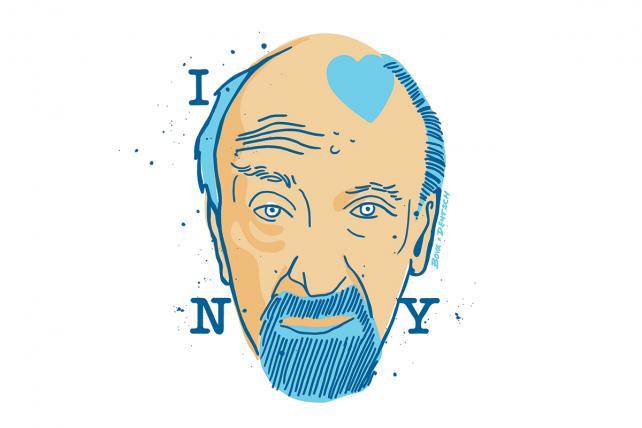 Milton Glaser's feelings for New York aren't limited to love—they're as varied as the city with which he's synonymous. Over a career spanning seven decades, Glaser has shaped the look and personality of city institutions including New York magazine, co-founded with Clay Felker; Brooklyn Brewery, which he branded; and the School of Visual Arts, where he teaches. Outside the city, he's best known as the designer of the iconic "I ♥ NY" logo, which presaged the mixing of copy and image that would evolve into more symbolic representations like smilies and emojis.

Now a true elder statesman of the design community, Glaser uses his platform to wax philosophic about design as a craft. He goes high—he incorporates Buddhist thought, theory of mind and discussions of purpose and meaning into his ruminations—and he goes hard as a pugnacious skeptic of design in marketing.

Though there are few accolades the 88-year-old National Medal of Arts winner has yet to collect, he still creates. This September, for instance, there will be an exhibit of his landscapes at Edward Hopper House in Nyack, New York. In April, Glaser appeared in the documentary "I ♥ NY," a short film directed by Andre Andreev of production company Dress Code that premiered at the Tribeca Film Festival. Glaser spoke with Ad Age about the film, his feelings about ads and the city that he will forever belong to. Our conversation has been edited.

The "I Heart New York" logo was first used in 1977. Why do you think it still resonates, even with people who have never been to New York?

I'm not exactly sure why, but I think one reason is that it's truthful, and that it's not a piece of advertising copy. It was the real response of our population, all of us who lived here, to an existing condition, which was that things were terrible. And we suddenly realized that the city could fail, that it could become desolate, that it could become a place where you didn't want to live, that all its virtues and the things we love it for could vanish within our lifetime. It's like somebody you hear going into the hospital—they suddenly got sick, and you realize how much you love them.

Do you think being authentic or truthful and being a piece of advertising copy are mutually exclusive?

Frequently. The role of advertising is to sell things to people. If advertising didn't convince you to buy something, its purpose would collapse. That's not to suggest that advertising doesn't frequently enable people to do things that are also good for them and that benefit the community. It's just that its inherent need comes out of the needs of the client rather than the needs of the audience.

Certainly, a number of your students at the School of Visual Arts end up in advertising and marketing or content marketing, which is—

I don't teach advertising and marketing.

But some people who come to your class probably end up going into it.

They probably do, and they may even come to class thinking they'll learn about that. The first question a designer or an aspiring designer should ask is, "What effect will this have on the people who follow this advice?" So we know what happens when they drink too many sugary drinks. But at the time, nobody would have thought of refusing a commission from Coca-Cola. So if you were responsible to your community or cared about your neighbors or your wife or your children, you would say, "Wait a minute, I don't want to tell people that they should drink sugar. I want to tell things as they are."

What do you think is the next big issue that design or designers could take on or frame in a useful way?

I believe that design can be an agent of change, absolutely. It's becoming increasingly popular, for one reason or another, to address our political system, the distribution of wealth, how people acquire money, the nature of the legal system. The daily issues of what it means to be a citizen in a good society are, for me, the great issues to address'

In the "I Heart New York" film, you talk about what the city means to you. How does it make you feel that the poster president for intolerance is a New Yorker?

The nature of New York is argument, it's disagreement, the attempt to arrive at the truth rather than believing you've already arrived there. The notion of what America was has changed dramatically in the Trump years, and the Nixon years. We see the degree of right-wing intolerance and viciousness that existed here but that was not very visible, because it was overlaid with a sense of democracy, generosity, openhandedness that we all thought America was. The nasty side or the dark side of human experience has become more visible than ever.

Is the dark side doing a better job of communicating their ideas?

The right over the last 20 years has done a much better job of accumulating power and changing perception, and we have witnessed that. The fact that Trump has been able to accomplish so much comes with the consent of an enormous number of people. Our current history is more like a satirical novel than it is like reality. I mean, how else could you explain the situation going on now with Trump and Russia? It's become a totally new piece of fiction where everyone acknowledges truth is irrelevant.

As someone who prides himself on communicating truthfulness, how does that make you feel?

If you believe something too much, you can be sure that you're not right. You have to keep an open mind. But if you maintain the fictional quality of everything—what a brilliant idea to discredit all news as being susceptible to being fake and convincing people that that's the case so they don't believe anything. Which leaves them in limbo waiting for your message. That's a piece of brilliant engineering of the human mind.

You're known for tactile, some might say old-school, media: paper, posters. How do you feel about digital design or seeing your work in digital?

I love the tactility of prints and paper, and I love feeling it and seeing it at an angle and so on. It's a different medium. I find the computer and the digital world has expanded certain possibilities, and basically excluded others. It's a trade-off. The problem with the computer: It's too powerful for the human mind, and so it forces you to do things you don't want to do. It's a treacherous servant.

When you look back on your career, is there anything that you think, "I would have designed that differently"?

Oh, I hope that's true every day of my life. The great joy of being in this practice is your ability to change your point of view constantly, and that nothing will remain stable. The problems don't remain stable. Your point of view doesn't remain stable. So why should anything be constant? On the other hand, you see recurring patterns that you have no control over. They're in your neurology, they're in your brain. It's not a question of choosing a way to do it. It's accumulating all this stuff that's already there and maybe putting it into a different arrangement, a different kind of way of thinking about what work is.

Love, of course, doesn't have to be unconditional. Is there anything that you hate about New York City?

Oh, so much of it, it's unbelievable. I mean, you can't separate what you love from what you hate. Very often in other relationships, you love someone and hate them alternately—within the same day, you go through, you know, 50 emotional changes in response to that person.

Do you think the work you've created could have been done had you grown up somewhere else?

There's no city like New York, no equivalent. And the city, of course, is a thousand different things. It's the worst city in the world. It's the best city in the world. Everything you hear about New York is because of its contradictions and its complexity, so everybody's view of the city is so different. That's the curious capability of the city to create in us. Every work situation is different. Every circle of people is different. How much money you make puts you in a totally different state of experience. So when people talk about New York, they're talking about this incredible range of contradiction and opportunity that is probably unique in the world.