Sarah Hofstetter is the global CEO of 360i, a full-service digital-first agency, among other things. In this preview of an upcoming Ad Age "Ad Lib" podcast, we cover the agency's new Amazon practice, the future of voice, kosher restaurants in Cannes and more. Our conversation has been edited.

What's the biggest challenge in dealing with Amazon? 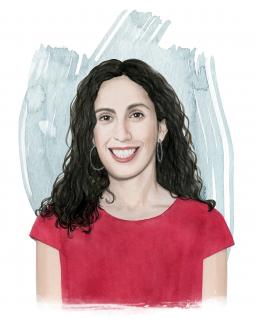 It's about hiring the right talent. A lot of people say they know what they're doing in the environment, but it's like the early stages of Google and Facebook, where people would say, "I'm a social media ninja," and it turned out they knew how to use Facebook. Just because you're a frequent buyer of Subscribe & Save, it doesn't make you an Amazon expert. For us it's about curating the right kind of talent.

What makes an Amazon expert at this point?

Amazon, obviously, is a platform and an ecosystem in and of itself. So optimizing the media or coming up with a smart media plan, either to drive on or off Amazon purchase, is one set of capabilities. User experience is another. And we're not even talking about voice, which is a whole other beast in and of itself—in a good way. A good beast.

Depends on who you ask.

Voice is awesome. The less I have to do with my fingers, the less carpal tunnel syndrome I have. You just need different skills in order to be able to master the platform. Again the social—someone who's really good at creating interactive GIFs versus lenses versus being able to buy and optimize on that. Very different skill sets.

You guys have reverse-engineered an algorithm that Amazon Alexa and Google Home have used to help brands better understand these smart devices. What are the takeaways?

In certain instances, we're better understanding how people are going down the funnel when it comes to discovery. If you're using, let's just say, an Alexa device, and you say, "Hey, throw in the Dasani sparkling water," which Brian is currently drinking, #NotAPaidAd ...

Although if Dasani wants to send more sparkling water, I won't say no.

God bless, you're an influencer. But let's just say you were drinking it, you loved it and you say, "Add Dasani sparkling to my cart." That's a quick path to purchase. There are certain things that are just natural, like getting music and weather and immediate, instant-gratification information. But if you're buying a car, people start their discovery in different ways. So it's more about learning how consumers are interacting with the platforms at different stages of their consideration, and then helping brands figure out where their place is in that ecosystem.

But when it comes to voice, then it seems like there has to be the person using it who comes with a brand in mind.

Not necessarily. I think that's where voice search optimization is now becoming this new area in the same way that search engine optimization was about learning the algorithms and figuring out how to increase your client's odds to have an unfair advantage.

So how do you game the algorithm?

Well if I tell you, I have to kill you.

You guys are sort of, for better or worse, known for the "dunk in the dark" real-time tweet during the Super Bowl in 2013.

On behalf of the industry, I'm sorry we're still talking about this.

Well, there was that blip at this year's Super Bowl.

I cringed. I will admit I cringed. Because there is, at a certain point, that muscle memory where you're like, "Oh God, are we here again?" And the truth is, we had an adorable [blackout-
related tweet] at CES. I thought Oreo did a great job capitalizing on that opportunity, but putting a twist on it. But I mean I saw that and I was like, "Don't pick up your phone and tweet anybody. Don't pick up your phone and text anybody. It's over."

Keith Weed, the CMO of Unilever, has said the company is going to pull back from advertising on social platforms that do not contribute to the greater good. A year ago, we had P&G's Marc Pritchard pulling back from digital advertising. What do you make of big brands making these sort of stances?

I think the direction is right in terms of saying, "I don't want to put my brand in places that don't feel right to me." That's what a good advertiser or marketer would do. And I applaud where they're going with this. But how do you avoid throwing the baby out with the bathwater? Folks like Marc and Keith, what's great about them is they carry such large pocketbooks that it makes the industry take note.

Is it a blunt object with which to hit people?

Sometimes you need a blunt object to hit people to make them sit up and take notice. Look at our industry right now. It's very clear that slow bubbling of information is not that interesting; broad headlines break through.

That's a slow bubble. It's not a blunt instrument.

It's definitely putting names and rumors out there in ways that the press can't, for example, which makes it a slightly blunter object. But what's your take on it?

To say that I follow it closely would not be fair. But I think that, for whatever reason, a lot of people still hesitate to come forward, yet there's so much pervasive conversation that there's stuff to be said.

Having people name themselves and come forward is the most powerful pushback.

Certainly. And I'm sure there are a lot of good reasons that they're making their choices not to. If nothing else, at least at this point, we are getting a greater degree of awareness. There might be a little bit more of an overcorrection in every office at this point, but that's not necessarily a bad thing relative to what seems to have been going on.

At 360i, the staff is 60 percent female and you have females high up. So you guys walk the walk.

We're very proud that we are. And we need to make sure that this is an industry that the next generation wants to work in. There are a couple of very tactical things that companies can do, including walking the talk on tolerance. The problem gets fixed when, say, you have no tolerance and you follow that up with the right mechanisms for people to feel comfortable saying something. And for HR to do an effective job investigating problems. We also need to make sure that this is balanced and doesn't turn into a witch hunt.

Switching gears, you've been very vocal about the role that religion plays in your life. You keep kosher, you're an observant Orthodox Jew—is that the right way to put it? I'm Jew-ish.

Jew-ish? That could be a podcast in and of itself. [Laughs] It's all about perspective. I can't really go to the hottest new restaurants or something like that, so that is a little bit of a challenge, especially since we've put a premium on the premium-ness of our business. We've put a premium on the glitz and the glamour. And so a lot of that is about wining and dining. There are two kosher restaurants in Cannes, for which I am very thankful. The sign of a really good client is one who is willing to dine with you at the kosher restaurant.

Amazon is the beachhead just because it's probably the least understood. But commerce overall is a biggie. Personalization, I think, is something that people were talking up a lot as a buzzword last year, but you're going to start seeing interesting uses of it, both in media and creative in the coming year. "Loyalty" is a nonsexy word that means a lot more to people these days, particularly to brands. Why are people loyal to brands?

Why are people loyal to brands?

They feel a connection. It's hyper-emotional. It's not the only thing, but it's a big driver. And yet, we have looked for years at loyalty miles and getting your little clip on your frozen yogurt card so you can get a 10th one free.

There was a book that refuted that notion. It was a cover story in Ad Age, I'm blanking on the author of the study ... Byron Sharp, that's who wrote the book. I just did a quick Google. Does that ring a bell?

Yeah, it does. That's some serious fast Googling. It would have been faster with voice, just saying.