John Legere is already trolling me and we haven't even been on the phone for a minute. "I'm so excited to speak with such a famous reporter," he says. I'm not famous, but Legere, T-Mobile's chief executive, is. Yet before he joined the company in 2012, consumers didn't have a clue who he was. At times, Legere can be alternatively goofy and rebellious, but is able to get away with it because he delivers (he's more than doubled the company's market cap since being hired). Now-commonplace offers from wireless carriers—no contracts, unlimited data, upgrade whenever you want—originated in T-Mobile's five-year-old "Un-carrier" marketing campaign, which Legere credits with fixing the worst aspects of cellphone plans. We spoke with him to see how much method underpins the madness. Our conversation has been edited.

You made a Claymation Christmas video last December in which you called Verizon and AT&T "bullshit." About two months later, AT&T filed a complaint.

When I got the call that AT&T was coming after our Claymation Christmas video, I became so happy. Somehow I just pictured the abominable snowman [depicted as AT&T in the video] having to do a deposition.

You have to admit that it's a real sad sign when you realize that an organization of professionals got together and couldn't come to the conclusion that fighting about a Claymation video is a bad idea. That made my day.

Is there a different John Legere than the one we see online?

For the first time in my life, I have no multiple personas, which is a really wonderful thing. I was almost a professional athlete. I have a lot of education. I was an aspiring young executive with a suit, tie and hair like Michael Douglas. And I was a young dad who had friends on the side. Those were all multiple personalities you would move between, but right now, I am all in, just me.

The "Un-carrier" campaign recently turned five. How has it helped T-Mobile's business?

The original concept I had was if we could just be the exact opposite of what these carriers are—un-them—then we could win. So I coined "the Un-carrier."

The first time we came out with it was at CES in 2013. I was onstage with [former Yankees manager] Joe Torre for an MLB deal. When it became Q&A, someone asked for my thoughts and ideas, and I literally snapped. I gave a talk, which became lore. I said that this industry is so horrific that if you came from Mars and landed in a spaceship, you'd see the wireless industry and go back to where you came from.

Through the Un-carrier, we were going to fix a stupid, broken and arrogant industry. And what I saw was a crowd that was so engaged in what it was, I knew we were close to something.

The Un-carrier phenomenon is like a small version of an Apple event. We find a pain point and we fix it. And when we make an Un-carrier move, it's permanent. It's a structural change in the industry that solves pain points, like no contracts, or introduces simplified billing or no international roaming.

What did Verizon and AT&T do in response?

Our goal was for everybody else to do what we were doing. We wanted to be the ones who caused something to change. No contracts or anytime upgrades—they didn't exist before us. But we didn't want to be the only ones doing it. We wanted the industry to move in the direction we were going.In the time period that has ensued, we have gained more customers than Verizon and AT&T combined. So it seems to be working so far.

When we do these things, I make it very personal. 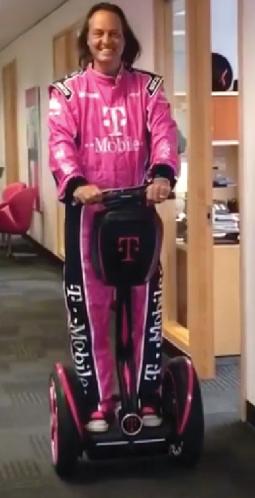 I love to be hated.

Just to step it back a tiny bit, when I started here and when we started this journey of the Un-carrier, there was no possible way we were going to get our message through the noise. I needed us to be seen and heard, so I declared an enemy—AT&T, Verizon—and I declared a hero, which is me, Batman, and I did something that is good for all consumers. So I taunt AT&T and Verizon, and I go after them to create a dialogue. And then when the timing is right, I go right into their face with a move that ultimately changes the industry.

Interestingly, when customers of theirs benefited from some change they made because of us, those customers would thank me. To me, what that is, is a future customer. They are watching, and they send me emails or watch my cooking show, and they wear my apron. So it's only a matter of time that one thing happens and they move over to T-Mobile.

Where the hell did the idea for "Slow Cooker Sunday," your weekly online video show, come from?

No matter what country or hotel I'm in, I've got a slow cooker with me. I've used it every Sunday for the past two years except once.

Last week, we got 3 million viewers and part of my prediction is "Slow Cooker Sunday" will surpass most of what's on cable television.

It has become an incredible feedback mechanism for us. It's a phenomenon. I'm used to being stopped and talked to because I'm often wearing head-to-toe T-Mobile all the time. But I'm literally stopped by people now as the guy with the cooking show, without any secondary commentary that I run a $55 billion company.

I hear you dish out hundreds of dollars to employees who ask questions.

There are a few things that I do, mostly to encourage communication and make things fun. Every day, I fly around the world and speak with employees. I'll go in a call center and ask if there are any questions. I know it's hard to be first, so I'll offer $20 for the first person who goes up. I'll then double down and offer $100 to someone who sings a question. They ask good questions, and the dialogue is fun. If someone asks a really good question, I'll give them my shirt. They love my clothing. I have baseball jerseys and jackets and sneakers—all custom things—and I usually leave a call center with no shirt. And I usually give away my sneakers, which are always Chucks with "T-Mobile CEO" printed on them. I leave with my socks and a lot less cash.

Have you ever filled a trash bag with cash before visiting a call center?

If a call center is struggling, I give them a challenge to improve. Two years in a row, I've shot my mouth off to the wrong place. Meridian, Idaho, had the biggest comeback of all time. I went to a Chase bank and told them I wanted $40,000 in small bills—this is all from my account—and they filled a trash barrel and big bags with the cash. I then got onstage and told them how well they did, and then dumped tens and twenties.

You worked at AT&T for 18 years. What was that like?

I was one of a small group of people who was picked for potentially running the company. I was running Asia at the time, and a CEO of AT&T I won't name took me in a car. I think we were in Tokyo. He made sure it was just him and I, and he said, "John, I don't understand it. You'd have an opportunity to run this whole company if you weren't such a maverick."

And I thought about that. It was, in effect, a statement that AT&T is a paramilitary hierarchy and that I was ahead of the curve, that if I kept my nose clean, I could run the company. Not long after that, I left to work for Dell Computer. And I remember sitting less than a year later with Michael Dell and his leadership team.They told me my maverick way of running a business could lead to me potentially running the company.

Wait, you could have been running AT&T instead of T-Mobile?

Well, yeah, basically, but this was like five AT&Ts ago.­

Q&AA: Rafat Ali on Media, Marketing Travel in an 'Age of Anxiety'