David Abbott on What It Takes to Attract Talent

"Most of the talk in the advertising business is about clients picking agencies. I think it's just as important for agencies to pick clients."

That's the view of David Abbott, the retired chairman and creative director of Abbott Mead Vickers in London, and one of this year's inductees into the Advertising Hall of Fame .

Mr. Abbott went on to explain that "every client we picked and agreed to work with -- it was not only that we wanted their money, but we wanted their company as well. We chose people we liked, for whom advertising seemed to be an important, upfront part of their business."

Among the clients AMV liked were Sainsbury's, the Economist, and Volvo. But the agency wouldn't take toy advertising or tobacco ads.

When Mr. Abbott retired in 1998, he had spent 40 years in advertising and had worked for four agencies, two of which he helped start. It was Bill Bernbach who first spotted Mr. Abbott's management skills in New York when he made him managing director of DDB London in 1969. From that time on, at French Gold Abbott and later at AMV, he always had two roles, according to his bio: a creator of ads and a builder of businesses. 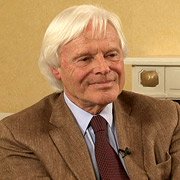 So my first question to Mr. Abbott, in a video interview, was what side of the business he enjoyed most. "Well, they were both fun. But if I was asked to give up one, I would have given up the management side. I wrote an ad on my first day in the advertising business and on the last day. So that was where my priorities lay. And fortunately, the best kind of management you can bring to an agency is to help the production of great advertising."

When Mr. Abbott, Peter Mead and Adrian Vickers went public and then sold their agency to BBDO, they obviously made a pile of cash, but "for a long time we were just ordinary guys. We just owned a business which we had to grow. But the main point was really when people say you're an advertising man it doesn't rile me, but I'm a man who happens to work in advertising, and I bring to that job all the qualities that I bring to other things."

His agency didn't take toy advertising, for instance, because the three principals all had young kids and "we objected to the media placement and the aiming at programs that children saw so that they could badger their parents. We were not trying to become the most priggish, prim agency in the world. We owned our company and we thought, "What's the point of owning a company if you can't do what you want?'"

Mr. Abbott's father died of cancer when he was 52 and the younger Mr. Abbott was 19. "And my childhood memories are of him sitting on the edge of the bed coughing for 10 minutes at the start of every morning. So there was no way that I was going to advertise cigarettes.

"So you come with who you are. And I don't think you park all those things at the doorway when you go to work. I was at Oxford with Adrian and Peter, so it was an agency started by three friends who stayed friends, and all felt the same way not only about advertising but about life."

Mr. Abbott contended that running a great advertising agency is not very difficult. "You basically stuff the place full of talent and allow that talent to bloom. So you have to have something that makes the great people want to come and work for you. And it's never money. You can always earn more money at a bad agency because they need you more."

"But," he cautioned, "you don't do great work in a bad agency. And that 's what drives people. You know, you basically don't need to crack a whip. They're cracking whips on themselves."

In retirement, Mr. Abbott has converted a couple of houses and designed a couple of gardens. And he's written a novel, "The Upright Piano Player." He explained the book is about a man who retires at 58 "and finds himself out of step with the age he lives in. It's not me, although many people have supposed it is . ... I was trying to raise the questions of , do we get what we deserve, or is it just random?"

Mr. Abbott said he gave the main character a business background as a sort of marketing consultant because contemporary fiction portrays people involved in business as "either comic or criminal."

But Mr. Abbott said "I wouldn't have stayed in a business for 40 years if it had been full of charlatans. I met some really interesting, idealistic, principled people in advertising. And I wanted to kind of reflect that , and talk briefly about some of the issues.

"So in a way it's my book on advertising, but I didn't want to write an advertising book. So I just stuck in a few paragraphs along the way."