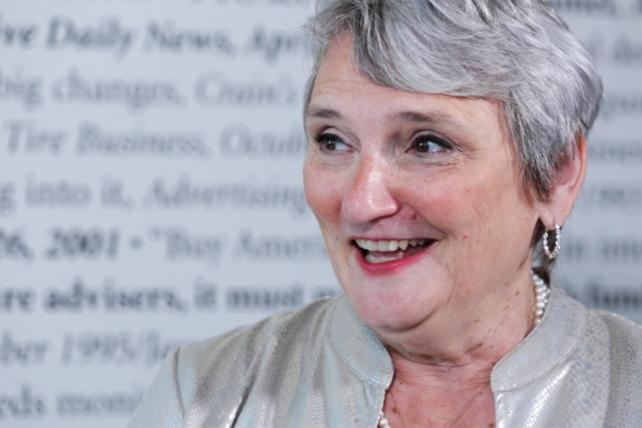 Consumer protection and privacy are not one-way streets, and consumers themselves need to step up to their obligations of "shared responsibility."

That's the view of recently inducted Advertising Hall of Famer Carla Michelotti, for many years the top lawyer at Leo Burnett Co., who has recently started her own consultancy.

Carla sat down with me in our Chicago offices overlooking Lake Michigan for a video interview, and we talked about such thorny issues as privacy, self-regulation, ad blocking and the division of advertising and content in the digital world.

What's needed, Carla told me, is for the advertising industry to educate consumers about their responsibilities and the realities of the marketplace.

"Privacy is certainly a looming, huge issue for the advertising industry. And for the world," Carla said, but the issue is not so much about how data is being collected but how it's being used. "One of the issues for the advertising industry is to educate and to talk about how the data's being used, and the ability of the consumer to control and have knowledge of that data."

Carla's contention is that the industry might be guilty of using outdated terminology. Consumer protection, for instance, started in the early 1900s when the Food and Drug Administration came forward to protect consumers against bad products and labels, and the Federal Trade Commission protected consumers against false and misleading advertising that was "beyond their control," as Carla put it.

"Now we're in a different age, and is it 'consumer protection' or 'consumer awareness' that we need more of? Is the government, or any self-regulatory mechanism, really in a position to protect consumers? With advertising and media so prolific, it's like graffiti -- it's all over the place."

The basic question: How are you going to protect people? After all, the consumer is selecting the information, and "the consumer is in the position of actually having some control. So doesn't the consumer have some obligation to be aware also?"

Carla pointed out that the Digital Advertising Alliance has come up with an icon that consumers can click on if they are getting ads they don't want to see or are inappropriate. Carla originated her own acronym for the process: security, consent, access and notice, or SCAN.

There also needs to be more discussion about advertising self-regulation, Carla believes. She said "one of the mind-boggling concepts" is that in the U.S. "the broadcasters who are dependent on advertising are not part of the financial support" for self-regulation.

She said there's great opportunity for self-regulation to receive better funding and more education, and she intends to stay "very active" in this arena.

Being lawyer-in-chief for Burnett provided Carla with "a lot of fun and incredible challenges," and it was also where she met her husband "because he was going to sue us."

Bob Colvin was the head talent negotiator at ICM for overscale talent, and a deal between one of his clients and one of Burnett's clients, Kellogg, had "gone sour."

ICM thought it was a done deal. "So they sent Bob up to talk to me. ... Bob starts telling me how it's going to be, how he expects this money and we had a deal da-te-da-te-da. And I knew there was room for negotiation ... because I knew why the deal had gone sour. Long story short, half-hour later he calls me and says, 'Gee, you want to go to dinner tonight with Jack Smith and me?' And I said, 'I haven't even talked to our client about our deal.' I thought: 'Typical Hollywood agent,' and I just let it go. As it turned out, we became very good friends and started going out. The deal we settled."

So, she says, "the clear distinction that had existed between commercial speech and regular speech is getting a little blurry, and that's going to cause some reinterpretation of the rules."

"It's jarring," Carla concedes, when you tell a blogger if he's reviewing a meal at a restaurant, he's got to say whether he got the meal for free because that's the FTC rule.

Complicating privacy issues created by the aggregation of data are the security problems they entail. "It's very scary," Carla says, "that everything can be hacked. ... I think the IT job is an underrated job" as is the chief privacy officer.

Ad blockers are being imposed by some suppliers on other suppliers, and Carla says there's not only going to be a reduction in content, "but I don't know if they understand the cost, the actual cost, financial cost, and the cultural cost of eliminating that information" that advertising supports.