The Sky's Not Even the Limit in Today's Naming-Rights Frenzy

Some Thoughts About Landmark-Marketing Opportunities
READ THIS NEXT
Peter Brabeck-Letmathe: Ad Hall of Fame Inductee Talks Nestlé and Clean Water
Citigroup has signed a $400 million-plus naming rights deal for the new New York Mets stadium slated for opening in 2009. Instead of Shea Stadium, the team's new field will be called Citi Field for the next 20 years. | ALSO: Comment on this column in the 'Your Opinion' box below.
Credit:

Do you think that people reach their limits when it comes to looking at advertising, and anything over those limits has a negative effect? 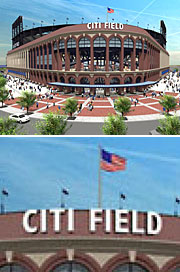 Citigroup has signed a $400 million-plus naming rights deal for the new New York Mets stadium slated for opening in 2009. Instead of Shea Stadium, the team's new field will be called Citi Field for the next 20 years. | ALSO: Comment on this column in the 'Your Opinion' box below.
Tolerance levels
My theory is that people don't object to advertising when it appears in places they are accustomed to seeing it (such as newspapers, magazines, TV, radio -- although running multiple commercials on radio at the top of the hour really bugs a lot of people), but they resent ads when they intrude on their private spaces (such as when they are taking a pee and they see an ad in the urinal).

In many circumstances advertising is an intrusion. But that's not the case with Citigroup's deal to acquire naming rights for the new Mets baseball stadium. When people see that the ballpark is called Citi Field, they'll think it's just some generic name for the place meant to honor the hardworking bureaucrats of New York Citi.

Why not 'New York Citi'?
A few years back, Citigroup ran a campaign with the theme "The Citi never sleeps," so why not go all the way and officially change NYC to New York Citi? Like I said, not many people would even notice (and those who did would think it was a typo). I'd say $1 billion a year for 20 years would be enough to wrap up the deal and keep the wolves from Gracie Mansion's door.

It's not unprecedented to monkey around with the names of entire states. Billy Joel sang about being in "a New York state of mind." How much would the proud state of Maryland take in for changing its name to Mary Land Rover? Is it too far-fetched for Arizona to be called AutoZona? Or Idaho to be referred to as Idaho-ho-ho in honor of the Jolly Green Giant?

We have a chance to eliminate the national deficit if the U.S. government can loosen up a little bit. Maybe I'm being a little too glib when I say that we could get out of the Iraq war by renaming Iraq, but how about calling that great welcoming monument in New York Harbor the Statue of Liberty Mutual? How do you like the sound of Viagra Falls? And what's wrong with Old Grand-Dad Canyon?

Eiffel Tower and Great Wall
These modest ideas have gotten me to think globally as well. Target is often referred to as Tar-zhay, right? So why not the Tar-zhay Mahal? Or the Eiffel Tower as Tour Intel? Do you think it would disturb our delicate foreign relations if I interceded on behalf of our biggest retailer to propose the Great Wal-Mart of China?

On the other hand, Ireland would be most receptive to the Smith Barney Stone. And the slogan could be, "You don't need to be lucky when you deal with Smith Barney."

Perhaps you're thinking that the real world isn't ready for what some might call travesties. You're probably one of those bleeding-heart liberals who can't stand honest people making an honest buck and, as a pinko environmentalist, object to having a commercial message on every blade of grass.

Avatar world landmarks
That's why they invented the avatar world. It's a seemingly innocuous first step to prepare the real world for what the avatar world has accepted and even thrived on. The avatar world can put a value on commercial rights for such city landmarks as Chicago's Soldier Field (do I hear a bid from Procter & Gamble's avatar representatives for Folger Field?) without fear of outrage or retribution.

The avatar world will determine how much naming rights are worth, and virtually nothing in this virtual world is off limits. Then, when we get used to Timex Square and Mount Everlast, it won't be such a shock when we see their logos flashing on their newly named properties in the real world.