That time of the month has truly arrived. The world's been abuzz over HelloFlo's online film about an young, entrepreneurial "Camp Gyno" who wields her status as the first menstruater at her summer camp like she's the Walter White of tampons. Promoting Naama Bloom's subscription service for feminine products, the video shows how advertising in the category certainly has matured. Its gutsy young star freely tosses around words like "vag" and "vagina," and even demonstrates that time of the month with a blood-squirting doll.

Such candor isn't exactly a new thing in menstrual marketing. Over the past few years we've seen girly goods advertising become increasingly risqué and fun. Take, for example, U.K.company Bodyform, whose fictional CEO Caroline Williams addressed the category's silly conventions when responding to a man's Facebook complaints about his menstruating girlfriend. Similarly, 2010 ads for Kotex out of JWT New York took the piss out of blue liquid, and this Tampax ad from 2006 out of Leo Burnett, Chicago, featured a high schooler leaping through a cafeteria with glee announcing, "I'm menstruating!"

The HelloFlo ad, however, brings even more grit to girls, channeling the balls and potty mouth of some of today's powerful young female protagonists (Kick Ass' Hit-Girl, Hunger Games' Katniss, even Disney's Merida). That stance, along with some awesome writing and production, have sent it straight to the top of the cluttered social-media marketplace, its star an eye-opening contrast to the angsty, arguably most famous period-getter in pop culture, Judy Blume's Margaret.

The film's current buzz prompted a friend to send me this reminder of the way things used to be: 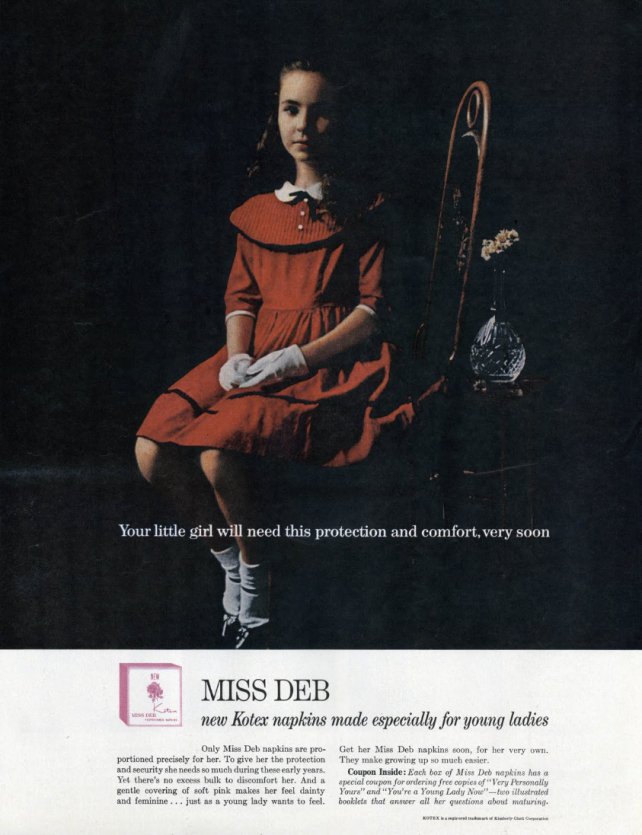 The ad apparently appeared in Ladies Home Journal and shows how Kimberly-Clark's Kotex previously indoctrinated the pubescent into the world of lady goods with a teen-targeted (via their mothers) line called Miss Deb, launched circa 1962. At that time, FCB Chicago was the brand's agency.

It's oddly appropriate that my friend discovered it on a blog covering all things vintage Disney because it was clearly created in some sort of fantasy land, in which a girl undergoes menarche like Cinderella transforms into a sparkly princess. "A gentle covering of soft pink makes her feel dainty and feminine. . .just as a young lady wants to feel," the ad reads.

But the dark art direction suggests a more terrifying metamorphosis. Rampant with symbolism -- a red dress, white gloves -- the image conjures uncomfortable notions for the parent, trying to make sense of a girl's newfound fertility alongside her virginal innocence. (The scary warning doesn't help either: "Your little girl will need this protection and comfort, very soon.") As one colleague pointed out, Miss Deb looks like she creeped straight out of the horror flick "Orphan," in which case she'd be the perfect spokesperson -- the film's eponymous child/monster turns out to be (spoiler alert) a 33-year-old woman!

Digging into Miss Deb's origins, a Google search yields a veritable flood of lady-goods lore -- the biggest gold mine being a link to Mum.org, aka the "Museum of Menstruation and Women's Health," the odd obsession of former Department of Defense employee Harry Finley. It's very easy to get lost in Mr. Finley's dense, labyrinthine collection of all things menstrual. You also can't help chuckle -- very loudly -- over how steeped in the dark ages and prudish the marketing was.

The site points out that Kotex also happened to do a film of its own, animated by none other than Walt Disney. Presumably, it was a way to get in early with young consumers. As YouTube commenter Joyce Irvin Harris wrote, "I saw this film with my Camp Fire Girls unit when I was about 9 years old. Kimberly Clark provided each girl with a kit of all the items﻿ needed for that first period." 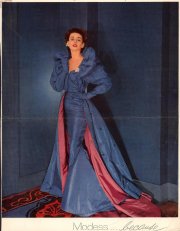 For the most part, however, "menstruating" and "period" in advertising back in the Mad Men era were dirty words, replaced with euphemisms such as "difficult days," "exacting needs" or even, nothing at all -- as in this 1953 Modess ad (left) featuring a picture of a lovely lady in a big beautiful dress sans puffy pantylines. 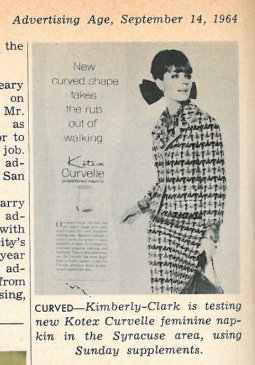 The Museum of Menstruation's archive also reminds us of how lucky we women are to be menstruating in 2013! Feminine products have been a hotbed of product innovation, their evolution on a steady course toward smaller, thinner, cuter, softer, more invisible, more reliable, more comfortable, more disposable, less smelly. Or, in advertisers' and marketers' words, a whole new world of "patented pressed ends," "blue strips," shapes that take "the rub out of walking" and wings! 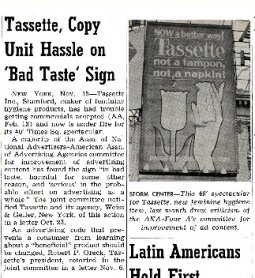 Advertising for such important female matters also sparked controversy, as documented in this old Ad Age article (left) about a product that didn't quite fly, the Tassette. God forbid someone display a blood-catching cup in the middle of Times Square.

Returning to 2013, we find that we're in a pretty nostalgic age, with consumers' current fascination for all things retro -- one of the reasons we started this series in the first place. Yet when it comes to feminine products, forward is certainly the way to go. Case in point, this ad for "Kotex Classic," courtesy of our good friends at SNL.

Rewind: When Miller Genuine Draft, Not Bud, Was 'Macro'

Rewind: Before Bieber, There Was Marky Mark for Calvin Klein

Rewind: Kids Bite Dog in The Second-Greatest Hot Dog Jingle of All Time

Rewind: Before Ray-Ban Ruled, the Question Was Who's Behind Those Foster Grants