See the Spot: John Leguizamo, Rachel Dratch Hitch a Ride on an Ostrich, Yak for Vroom

Online auto retailer Vroom debuts its first TV campaign today, starring John Leguizamo and Rachel Dratch as a married couple who get over their fear of buying a used car after finding out about the site's features such as free delivery nationwide.

In a 30-second spot titled "Peggy and Dick's Wild Ride," Mr. Leguizamo and Ms. Dratch are shown riding an ostrich and a yak down the street, instead of taking a trip in the comfort of a car, as they are "terrified" of buying a used vehicle.

"We decided to open with an ostrich and a yak -- the most ridiculous mode of transport for when people don't want to deal with 'those car people,'" said Gaurav Misra, chief marketing officer of Vroom. "There's no one who walks off a lot that hasn't felt like they've just been screwed on price or quality of a car. We introduce Vroom as that magical alternative."

On the auto retailer's website, customers can choose from a selection of more than 2,000 pre-owned vehicles. The company says it is the largest online pre-owned car retailer and has served 150,000 customers.

"There's a little magic in what we do and we wanted the spots, in terms of tone and story, to embody that sense of wonder," said Mr. Misra. "We think it's going to completely disrupt and revolutionize the biggest retail category in America: used cars."

"We suspend disbelief a little bit: you can click on a website and a car arrives at your home in a gorgeous truck. It's exactly what you want and you didn't pay that much for it."

Ms. Dratch is seen at the end of the spot admiring one such truck: the company's new "showroom on wheels," a delivery truck with clear windows that effectively acts as a billboard displaying the used cars on the road.

The shoot for the campaign under the Boathouse agency, formerly Cloud Factor Collective, was as interesting as the animals chosen. After discovering that insurance for the actors to sit on the ostrich and yak was too costly and then reconsidering the unexpected nature of filming with live animals, the company opted to use a green screen for the scene. 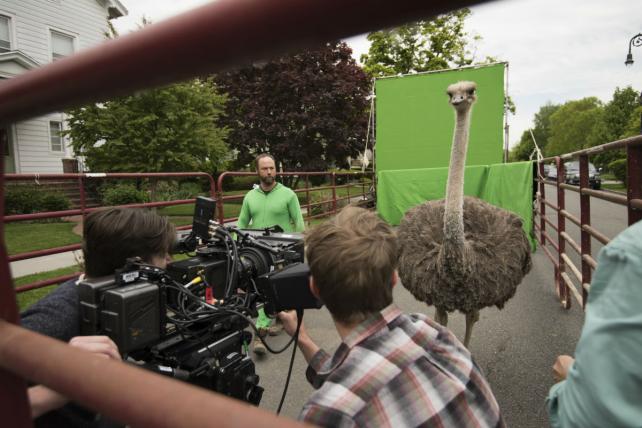 "There were really funny, last-minute hurdles that we had to jump through in order to get a live ostrich and yak on the streets of Brooklyn," said Mr. Misra. The ostrich had to be with a handler and in an enclosure during the shoot and the yak received a full veterinary exam a day prior to the shoot, as requested by city officials.

The TV spots will be released in Austin and Phoenix on Monday before a national roll-out.

"They're classically trained improv actors," said Mr. Misra of the stars. "The testimonial video and rap video were unscripted and done in one take. There were 45 people behind the camera in hysterics as they riff on how great car buying can be."

Since it began in 2013, New York City-based startup Vroom has raised $169 million in funding and reached nearly $1 billion in revenue last year. Its chief executive Paul J. Hennessey, who joined the company last month, was formerly CEO of Priceline.com. 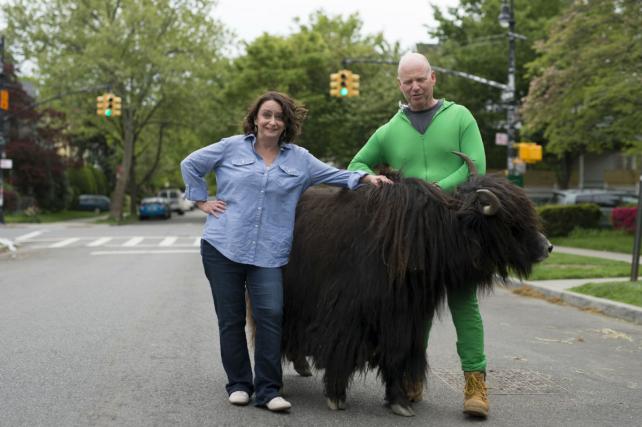 Rachel Dratch, her yak co-star and a handler on the set of Vroom's first TV spot.
Credit:
Vroom

NFL now means 'Not For Laundry' in new Tide campaign

Have 3.5 Hours to Kill? See This Laphroaig Whisky Filibuster