Special K is launching its first ad work from J. Walter Thompson by underscoring the brand's broader emphasis on wellness rather than weight loss, which began earlier with longtime agency Leo Burnett. 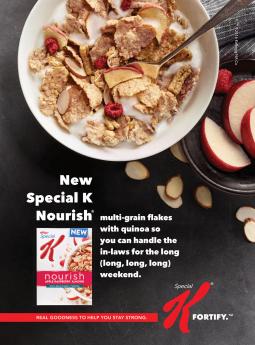 After years of focusing on Special K as a way to help shed pounds, the brand saw sales slide and started to shift its positioning to appeal to women moving away from calorie-focused dieting and looking for broader nutritional benefits.

Special K returned to sales growth in the U.S. in 2015, in part helped by adding more freeze-dried strawberries to the Red Berries variety, but Kellogg Co. knows it has more to do to ensure continued growth. "It's our biggest and most important cereal brand and driving Special K is essential to having a thriving cereal business," Craig Bahner, President-U.S. Morning Foods, said at Kellogg's investor meeting in November.

Kellogg remains the world's top seller of breakfast cereal, but its share of the global breakfast cereal market has fallen from 29.9% in 2010 to 27.9% in 2015 as players such as PepsiCo and Post Holdings have gained ground, according to data from Euromonitor International.

Kellogg moved much of its Special K advertising business from Publicis Groupe's Leo Burnett to WPP's JWT earlier this year. Its final Leo Burnett TV spot launched in April, carrying the tagline "Eat special. Feel special." In a continued shift away from dieting, the new "Fortify" work from JWT does not mention calories, which were called out in the April campaign though were not the main focus.

The 15-second and 30-second commercials set to begin airing Jan. 4 feature shots such as a joyful kid and a woman beckoning someone to join a trio jumping into a pool, before a woman wearing a red scarf -- likely a nod to packaging color cues -- relaxes outside to eat a bowl of new Special K Nourish. A voice-over includes lines such as "You're strong. And we're here to help you stay that way."

Jeremy Harper, a senior director-marketing at Kellogg, said he feels the new work is "celebrating the inner strength that we know every woman possesses" and that the brand is "focusing on providing women with foods that are both delicious and nourishing so we can do our part to help them stay strong."

Or, as Sarah Barclay, executive creative director, J. Walter Thompson New York, sums it up: strong is the new skinny.

"Celebrating women and the strength they exude everyday made this campaign a special one for us to be part of," Ms. Barclay said in a statement provided by JWT. "We're proud to partner with Special K to deliver a poignant and important message that being strong on the inside is just as important as being strong on the outside."

Special K Nourish contains multigrain quinoa flakes, a first for the brand, along with ingredients such as granola clusters, apples, raspberries, and nuts. It hits U.S. stores in January with a suggested retail price of $4.49. Mr. Harper called Nourish "transformative," citing the variety of ingredients such as coconut, granola and quinoa. In the November presentation, Mr. Bahner called Nourish "some of the best food we've ever tested in the history of Special K." The product follows this year's launch of Kellogg's Origins, a line of "ancient grain" cereal, granola and muesli made with ingredients such as quinoa, rye, spelt, fruit and nuts.

Special K quietly kicked off the "Fortify" campaign with a Best of 2015 video about women such as a 92-year old who ran a marathon and San Antonio Spurs Assistant Coach Becky Hammon. The women in the 45-second digital video are not official brand spokeswomen.

Initially, Special K will focus on Nourish in its advertising as the product launches in the U.S., and then will include the rest of the existing line and additional new products.

JWT developed the new creative for Special K, and other agencies involved in the push are Krispr Communications, VML, Starcom and Integer. A print ad is set to begin appearing in March magazines.

NFL now means 'Not For Laundry' in new Tide campaign

Have 3.5 Hours to Kill? See This Laphroaig Whisky Filibuster