Digital Detox: What Agencies Can Learn from the Amish | Ad Age
Skip to main content
Sign In Register

Digital Detox: What Agencies Can Learn from the Amish

During 'Amish Month,' Technology Is Banned from Meetings
READ THIS NEXT
Gut Checks and Guardrails: 6 Ways to Stay Small When Your Agency Gets Big

This past month, we tried something new here at barrettSF. It was an idea proposed by Jillian Davis, our senior planner. Jillian is smart and observant and proactive, and thought it'd be healthy for the agency to do a little digital detox. We thought so, too. So on September 1, we taped posters on our conference-room doors and declared it "Amish Month."

The rules? When you're in a meeting, and you're not presenting, you can't look at your laptop. Or your tablet. Or your smartphone. Or your Apple Watch. Or your discontinued Google Glasses. Or your contact lenses if they receive a wi-fi signal.

It was really successful, and it also sucked.

People were forced to play Words With Friends less often. One guy even lost a game in which he was leading because he "timed out."

Bottom line? Sacrifices were made. Large ones. By many. But there were also some real positives.

As an agency, we twitched less.

We felt less phantom buzzing in our pockets.

Meetings were short. Okay, not short, but shorter. Okay, they were marginally shorter, maybe.

The point is, we made it. The month came and went, and we survived. Thrived, practically. Which got me thinking, predictably enough, about our omnipresent pal, technology.

Bear in mind, I lived in the pre-Jobs/Wozniak/Gates/Zuckerberg world. I grew up adjusting rabbit-ear antennas, dialing rotary phones, and spinning 45s on turntables. I wrote my 94-page college thesis freehand. So I feel well qualified to compare a more Amish-y world to 2015.

One time out of 100, or one month out of 12, the idea of shutting the conference-room door on modern devices -- preferably a door of the old-school, knob-and-hinge variety -- feels right.

There is some wild stuff that happens. With no keyboards to pound or screens to stare at, heads tilt up and start to look around the room. There's eye contact. Facial-expression recognition. People speak words and others hear them, and can perceive whether those words are serious or funny, sincere or sarcastic, angry or glad.

Like I said, it's wild stuff. We've decided to extend Amish Month into October.

We haven't gone so far as to hire an Amish employee. I suspect a real Amish guy would think our efforts are a little half-assed, a little wannabe Amish. He might shun us, and no one wants that.

But he'd have to admit we're trying. 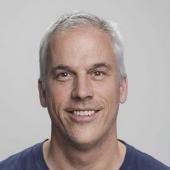 Jamie Barrett
Jamie Barrett is partner and executive creative director at BarrettSF.
Follow View all articles by this author