The Tech That Allows a Pair of Shoes to Chase You Across the Web Will Be Repurposed Across Society
READ THIS NEXT
How restaurant chains are duking it out to be the best in their categories
0415 pc04 John Battelle 2x3
Credit:
John Battelle

Every good story needs a hero. Back when I wrote "The Search," that hero was Google. The book wasn't about Google alone, but Google's narrative worked to drive the entire story.

So what might the hero be of today's post-search digital world? Allow me to propose an unlikely candidate: The lowly banner ad.

For my next book, I've been identifying "artifacts" extant in today's world that, one generation from now, will effect significant and lasting change on our society. Most of these artifacts are well-known, but all are still relatively early in their adoption curve: Google's Glass, autonomous vehicles, or 3D printers, for example. Some are a bit more obscure but nevertheless powerful -- for example, microfluidic chips (which may help bring about DNA-level medical breakthroughs).

Few of these artifacts touch more than a million people directly, at least so far. But there is one technological artifact that is already at massive scale, driving billions of dollars in revenue and touching every person who has ever used the internet. This artifact is currently called "programmatic ad tech," and it is most famously illustrated by Terry Kawaja's Lumascapes (and less famously, my own "Behind the Banner" visualization).

This is the infrastructure that allows a pair of shoes to chase you across the web. How can it possibly be as important as, say, a technology that may cure cancer?

Because the very same technologies we've built to serve real time, data-driven advertising will soon be repurposed across nearly every segment of our society. Programmatic ad tech makes the database of intentions real time and distributes it beyond search. And that's a very, very big deal.

Think about what programmatic ad tech makes possible: An individual requests a piece of content through a link or an action (like touching something on a mobile device) and, in milliseconds, scores of agents execute thousands of calculations based on hundreds of parameters, all looking to market-price the value of that request and deliver a personalized response. This happens millions of times a second, representing hundreds of millions, if not billions, of computing cycles for each request. What's most stunning about this system is that it's tuned to each discrete individual -- every single request/response loop is unique, based on the data associated with each individual.

Let me break that down:

1. The request: A person indicates a request: a desire, an intent, a preference.

2. The process: Billions of compute cycles and sh*tons of data are engaged to process that desire.

3. The response: A personalized response is generated within milliseconds.

At present, the end result of this vastly complicated request-process-response system is often the proffering of a banner ad. But that's just an artifact of a far more interesting future state.

Today's ad tech has within it the glimmerings of a computing architecture that will underpin our entire society. Every time you turn up your thermostat, this infrastructure determine in real time the most efficient response to your heating needs. Each time you walk into a doctor's office, the same kind of system could be triggered to determine what information should appear on both your and the health-care provider's screens, and how best payment should be made (or insurance claims filed). Every retail store you visit, every automobile you drive (or are driven by), every single interaction of value in this world can and will become data that interacts with this programmatic infrastructure.

Now, step back for a second. Does this scenario concern you? If so, good. Because it's imperative we consider the choices we make as we engage with such a portentous creation. This year alone, each human on the planet will create about 600 gigabytes of information, and that number is growing rapidly. What are the architectural constraints of the infrastructure that processes this information? What values do we build into it? Can it be audited? Is it based on principles of openness, or is it driven by business rules and data-structures favoring closed platforms? Will we have to choose between an oligarchy -- Google, Facebook, Amazon -- or will we take a more distributed approach, as the original internet did?

What we today call "ad tech" will tomorrow become the worldwide real-time processing layer driving much of society's transactions. That layer deserves to be named as perhaps the most important technological artifact extant today.

One generation from now, we may not "click" on banner ads, but we'll always be pulling into traffic, filing health-insurance claims, buying clothes in retail stores, and turning up our thermostats. And those transactions will be lit with data and processed by a real-time infrastructure initially built to execute one pedestrian task: serve a simple banner ad.

ABOUT THE AUTHOR
John Battelle is CEO of Federated Media. 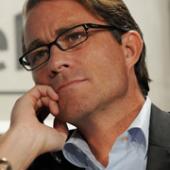 John Battelle
View all articles by this author