As more and more people willingly slither on their bellies in mud beneath barbed wire and dash through fields of live wires, brands like Reebok and Dos Equis are following them onto the courses of competitions designed to test their strength and endurance.

Competitions like Tough Mudder, Spartan Race and CrossFit Games share an emphasis on personal fitness and an attitude that participants should push themselves beyond the comfortable limits of a routine gym workout, and they're clearly no passing fad. 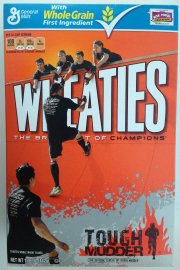 Tough Mudder on a Wheaties box

Spartan Race -- a more rigorous obstacle course where participants are urged to finish with the best time possible -- had 500,000 racers, up from 200,000 in 2012. Reebok is its title sponsor.

Then there is the CrossFit Games -- which isn't an obstacle course but rather a series of exceedingly difficult workouts taken from the eponymous and cult-like strength and conditioning program. It had 138,000 participants in 2013, up from 69,000 the year prior, with the finals televised on ESPN. Reebok is also its title sponsor.

The fact that 70% of Tough Mudder participants are male and their average age is 29 helped bring Dos Equis on board, according to brand director Ryan Thompson.

The brand has been a sponsor since 2010, and it served a beer to every participant of legal drinking age who finished the course at 35 U.S. events last year. It also has its branding on Tough Mudder's notorious Electroshock Therapy obstacle -- the field of live wires -- which gets exposure on social media via posted photos.

"We know the participants and attendees are disproportionately social-media-savvy beer drinkers," he said.

No brand has done more to align itself with endurance competitions than Reebok, which is the title sponsor of both CrossFit Games (in the fourth year of a 10-year deal) and Spartan Race as of last year. While the apparel company wouldn't disclose the size of its investment, it goes far beyond marketing to promote the sports and extends to product development.

Reebok has an exclusive apparel and footwear license with the CrossFit fitness program and sold a million pairs of the Nano sneaker developed for it last year, according to Chris Froio, Reebok's VP-fitness and training. It also has a new series of sneaker, the All Terrain, developed for obstacle racing (it includes drainage ports for water) and designed in partnership with Spartan Race that's being released next month.

These sponsorships are the result of a four-year-old brand repositioning to center on fitness and steer away from team sports. (Reebok's 10-year contract as the NFL's licensed apparel maker ended in 2012.) They also represent a more compelling approach to personal fitness than tedious hours spent on a treadmill, Mr. Froio said.

"What's more important is them continuing to be aspirational, not necessarily that they continue to grow by ten-fold," Mr. Froio said.