Martin Sorrell: Internet Has Created More Value Than It Has Destroyed | Ad Age
Skip to main content
Sign In Register

Martin Sorrell: Internet Has Created More Value Than It Has Destroyed

Downsides Include Privacy Threats and 'Superficiality'
READ THIS NEXT
Cuts Aren't Over, But P&G Wants to Restore Agency Profits

The 4A's Transformation Conference kicked off Tuesday morning with a disagreement between Sir Martin Sorrell, CEO at WPP, and Microsoft Research Partner Architect Jaron Lanier about about whether technology has destroyed or created value for industry. 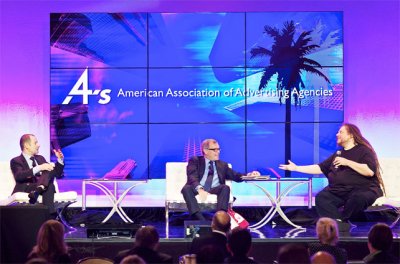 In the panel "Technology, Data and Social Media: Does it make us all different or the same?" moderator Rob Norman, CEO of Group M North America, tossed the first grenade, asking if technology has destroyed the equivalent of the value it has created during the past 20 years.

"We probably destroyed more than we created," said Mr. Lanier, who in a baggy T-shirt and dreadlocks could not have looked more the opposite of the impeccably groomed Mr. Sorrell. "We discovered in Silicon Valley if you apply information systems to an industry you can shrink an industry but grow yourself. It happened to the music business, and it's a huge problem."

Mr. Sorrell swung back: "[We've got] the internet ... and you've narrowed it down to [the notion that ] data and data analytics have destroyed more than they've created. I think that 's palpable nonsense. Clearly there's a change in the balance of power to consumers … [but] the political benefits, social benefits and economic benefits outweigh the disadvantages."

Digital innovation from the likes of Google and Facebook have created more value for the advertising-marketing industry than they have cannibalized, said Mr. Sorrell, who cited growth figures and WPP's financial results as evidence. "It's a trillion-dollar industry, and with the exception of 2009" it has grown consistently, he said, adding that only three years in the last 27 have been down at WPP.

The two agreed, however, that data and technology have downsides. Privacy issues, said Mr. Sorrell, as well as the superficiality in communication and analysis, driven by social media and systems. "There is this proclivity of people to analyze things almost before they're analyzable," he said.

Insisting that despite working for a tech giant, he is at heart a creative who once wrote advertising jingles, Mr. Lanier said he believes the industry has started to overvalue data, without good science or creativity behind it.

"We entered into a weird phase in the last decade or so where everyone is looking for magic data to give them a leg up on everyone else," he said. He plugged Microsoft's Xbox Kinect and its ability to pull data through an interactive technology, and he challenged the industry to "stand up and grab" unexplored creative territory. "The reason it's not being explored is this silver bullet lust driven by data … which in the short term yields results, but in the long term you get played more than you play."

Mr. Sorrell agreed with that point -- that there can be too much focus on the numbers -- but said that the data lust was driven by what's happened since the economic collapse in 2008. "This crisis of confidence led to a shift away from the marketing function to the finance and procurement function. That is unhealthy in the long term, because you cannot cut your way to success. … There has to be a rebalancing." As one of his clients puts it, there needs to be "more magic and less logic," he said.

The discussion veered into the growth of social media -- and the stability of more traditional channels. Mr. Sorrell offered some numbers to illustrate the point. "We manage a book of about $75 billion dollars around world," he said. "Last year we invested about $1.6 billion with Google, $200 million in Facebook. Our prediction this year will be to get to somewhere about $400 million with FB, and Google will be north of $2 billion. As a point of reference, we'll be investing about $2.5 billion in News Corp.... And we spent about $6 million with Twitter last year. Don't know what it'll be this year."

As the spend on social media rises, clients are starting to question the measurement issue. "It is a very sexy area, and clients have gone in almost willy-nilly … because it is fashionable to do so," Mr. Sorrell said. But more procurement and finance departments are starting to scrutinize the value of those investments. "It's a very interesting stage we're reaching," he said.

Despite the power of Google and Facebook, Mr. Sorrell stressed that advertisers cannot look at any of the social-media giants on their own. Rather, options should be viewed in an integrated way. One of the most interesting things he's observed, he said, "is that free-to-air TV didn't fall flat on its face" when many predicted it would. TV viewing is up in terms of number of hours watched -- couch-potato hours have actually risen. Some of that might be connected to unemployment, but Mr. Sorrell saw something broader. "It's because of the link between new devices, such as smartphones, tablets or whatever, and the old devices, such as the free-to-air [TV] space," he said.

Mr. Sorrell also referred to Google's "frenemy" status, a term he coined several years ago. "Google has become a friendlier frenemy over the past couple of years," he said. "It's become a much more focused company under Larry Page. But it's ironic, because it now has five legs: the search leg, which is all-powerful, despite efforts of Microsoft and Yahoo to do something about that ; a display leg, which is becoming more powerful; a powerful video leg; an increasingly powerful social leg; and last but not least -- and I'm not sure how they managed to get it through the regulators, but they did -- is the mobile leg. … The alliance between Google and Motorola Mobility is a very powerful thing."

The panel wasn't always so serious. In a suit-vs.-dreads throwdown, Mr. Lanier told Mr. Sorrell, "The nerds are taking over. It's good for me and my friends." Mr. Sorrell, however, saw Mr. Lanier in a different light. He said Mr. Lanier had already conceded that he's "really a creative, a jingle writer." To that , Mr. Lanier solicited laughs from an already-ebullient audience: "You need to watch out for this guy with this flattery. This is where he has found his success."