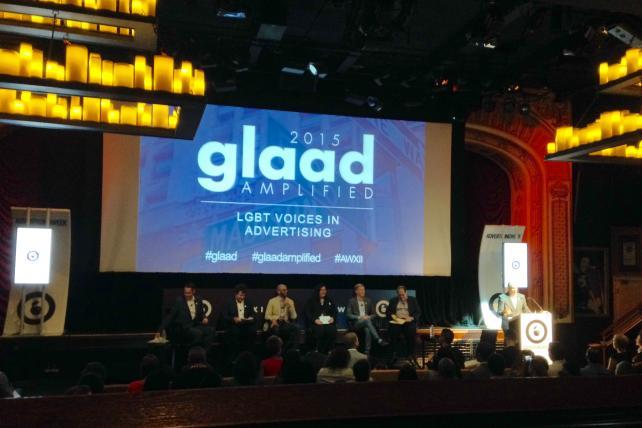 "I remember a time when it was noteworthy that a mainstream campaign would run an inclusive ad in LGBT media," Mr. Elliott said. "Now we've reached the point where these national brands are targeting the LGBT market and the general market in national media."

The "GLAAD Amplified" panel, held last night for Advertising Week, recognized DirecTV's "Rivalry," Wells Fargo's "Learning Sign Language," "Tylenol's #HowWeFamily," Target's "#TakePride" and Google My Business' "The Story of Jacob and City Gym." What sets these ads apart from years' past, Mr. Elliott said, is they're all general market ad campaigns. There's a difference between putting an LGBT-inclusive print ad in Family Circle versus putting the same ad in Out Magazine, he added.

Manoj Raghunandanan, senior marketing director for Tylenol, said inclusive marketing is a chance to support all types of families and give them a chance to be seen. And ads will be seen by many; all the campaigns recognized won big social attention. The Google My Business spot garnered more than a million YouTube hits after playing during the ESPYs (it aired shortly before Caitlyn Jenner's speech), said Matt Smith, global head of marketing for Google My Business. Still, he added, ad dollars are behind the "L" and "G" in LGBT, but not as much behind the "T." Likewise, Mr. Raghunandanan said there's still work to be done. "There's too many other case studies that show we're still on this journey," he said, adding that African-Americans would be another group to focus on.

This year, LGBT-inclusive advertising has seen a bunch of hits, and brands seem to be especially vocal in support of LGBT-inclusivity. They took to social media when the Supreme Court made the decision to guarantee the right to same-sex marriage. Just this month, Doritos launched limited-edition multicolored chips in support of LGBT pride.