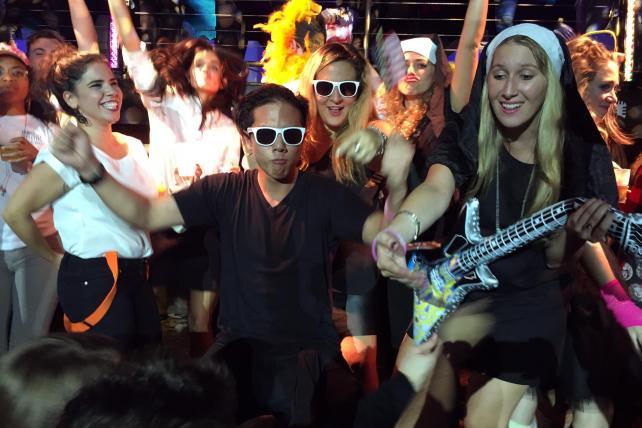 Not even one week after Pope Francis brought his gospel of anti-consumerism to Manhattan, Advertising Week in New York opened up with a gala in a cathedral. Granted, St. Bart's, where the event was held, is an Episcopal church, so the Cool Pope, as he's sometimes referred to in the press, might have been cool with it. He also might have been cool with the jazz band and the drinking (even if the booze was not transubstantiated) -- and maybe with Advertising Week Executive Director Matt Sheckner preaching the glories of advertising from the pulpit. Lighting up the walls of the church with the hashtag #AWXII and the logo of event sponsor Amazon.com was just a little much.

But Advertising Week wouldn't be Advertising Week without a little excess. Perhaps the most annoying excess of the week was the humidity. Unseasonably warm, moist weather combined with tourist-dodging in the Times Square area had a number of people grumbling. When they weren't grumbling, however, they might have been talking about the following:

Ad blocking, ad blocking, ad blocking: Ad blocking didn't have much of an official presence in the programming for Advertising Week, but it kept coming up at panel after panel. Ad blocking, along with ad fraud, seemed to be two of the biggest pain points of the week, though there was very little offered in terms of practical solutions. A lot of agency and marketing types kept saying "better creative" was the best answer. But just in case, the Interactive Advertising Bureau is embarking on a publicity and engineering battle against ad blocking.

Your name here: Taking advantage of all the worries about ad blocking and ad fraud and having so many industry people in the same place, the Outdoor Advertising Association of America, with the help of agency PNYC, ran a pretty brilliant ambush campaign. Using billboards, phone kiosks, bus shelters, buses and even Times Square, the effort called out agencies and executives by name, arguing that outdoor was not only the real deal, but it could also drive real results in digital. The ads sent people to feelthereal.org, where the dangers of digital and the benefits of outdoor were made clear. The effort also included a lot of robot-bashing and secret messages in the binary code included on each ad.

Pre-rolls for panels: Attendees to Advertising Week perhaps felt at times like they were watching online video as every panel was preceded by video advertising. One particular ad, for Adobe, was actually brought to life in the venues. The spot featured a Mars launch continually interrupted by the demands of the fake energy-drink brand sponsoring the trip to space. AstroBoost energy drink, as the brand was called, was actually on offer during Advertising Week.

An Advertising Week by any other name: "It's something else, but not Advertising Week." That was WPP Chief Martin Sorrell during a fireside chat with MediaLink Chairman-CEO Michael Kassan. No one seemed to have a better idea for what to call it, though.

A little encouragement: Mr. Kassan kicked off his talk with Mr. Sorrell by asking about the previous day's announcement of the comScore-Rentrak merger. WPP will have a 16% stake in the combined firm, but no seat on the board. Despite all that, Mr. Sorrell called the timing of the announcement "excellent" and "accidentally on purpose." He also said, "It's fair to say we tried to encourage them to get together."

A different kind of agency talent: Some may have taken in Snoop or one of the other not-so-secret surprise acts -- and we're totally biased here -- but one of the most entertaining events of the week was Ad Age and The Trade Desk's Karaoke for a Cause. Fifteen groups from fifteen agencies battled it out for charity at Arena just off of Times Square. To say the teams took it seriously would be an understatement. In fact, Grey's team hired a marching band to walk them on and off the stage for its rousing rendition of Whitney Houston's "I Wanna Dance With Somebody." (Apparently karaoke purists did not approve of the ringers.) Ultimately, Starcom MediaVest's team beat rivals such McCann's Touch This and Key of D (that would be Deutsch) to secure the $10,000 prize on behalf of UJA-Federation of New York.

Move over J.T.: "Is this the line for T.A.?" Overheard during the wait to hear AOL CEO Tim Armstrong, apparently famous enough in Advertising Week circles to go by just his initials, at the Times Center on Wednesday.

She doesn't always watch TV, but…: Julz Goddard, better known as YesJulz on SnapChat, told Ad Age that she doesn't watch TV, but when she DOES watch TV, she watches commercials. And she's a big fan of Sprite's work featuring LeBron James.