That Out-of-Home Campaign Rolling Around Advertising Week Has a Secret Message for Robots, Ad Execs 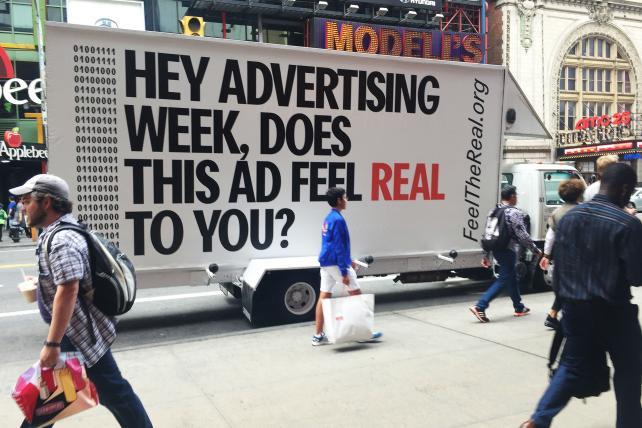 Those in-your-face outdoor ads making the rounds of Manhattan this week have more to them than meets the eye. The binary code on each ad turns out to contain an actual message.

Since Monday, attendees of Advertising Week in New York (and even people in New York not attending Advertising Week) have been confronted with an out-of-home effort asking them to "feel the real." The "real" in this case is advertising seen by real human beings, as opposed to a lot of digital advertising that may only be seen by lowly robots.

The effort for the Outdoor Advertising Association of America was created by PNYC, the New York sibling of Partners & Napier. Launched on Monday, it's included billboards, trucks, digital signs, bus-shelter ads, phone kiosks and more. Notably, the ads have called out specific people and agencies, including Maxus, Mediacom, Mindshare, as well as Ogilvy CMO Lauren Crampsie, Mindshare New York President David Pullan and OMD Chief Digital Officer and Chief Innovation Officer Ben Winkler among others. One reads "Group M, you are consuming an advertisement. You are real."

The campaign even got its moment in Times Square last night.

All of the ads direct viewers, presumably human, to feelthereal.org, where they're first asked to answer whether they have seen the ads or are, in fact, robots.

The ads also contain more messaging than is immediately apparent. It turns out that binary numbers on each ad contain messages. One translates to: "Ad Age loves real clicks." The one on the truck making its rounds in Manhattan reads: "OOH makes digital real." Those who respond to the Feelthereal.org quiz by saying they are robots are greeted with a long line of binary that translates to a quote from USA Network's series "Mr. Robot."

Nearly half of the $14 billion spent on digital advertising is lost due to fraud, bots, and non-viewability every year, PNYC said. The ads aren't meant to simply mock digital advertising or to suggest digital doesn't work, however, but rather to make the point that outdoor advertising can "drive consumers to digitally engage with brands," according to PNYC.